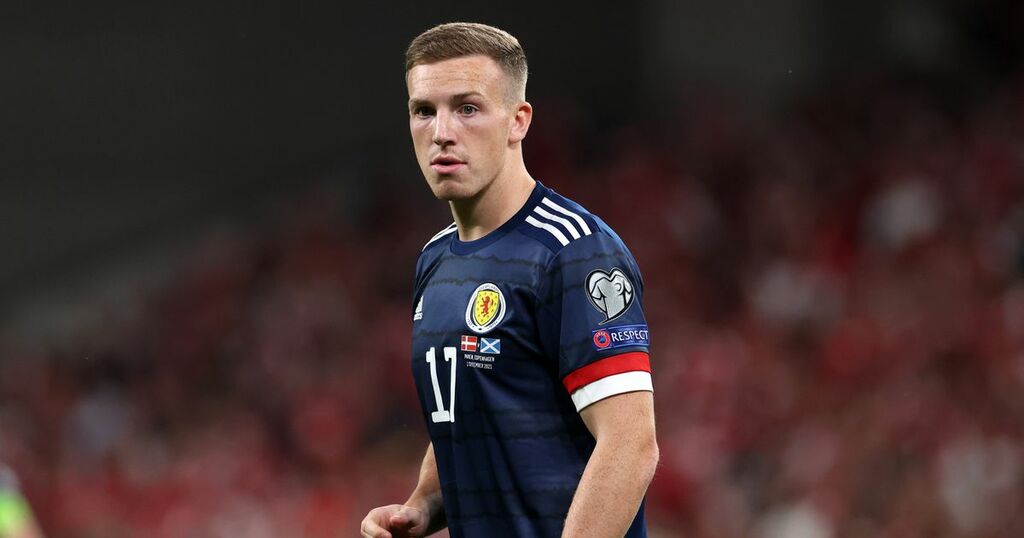 Aberdeen boss Stephen Glass has told new Scotland cap Lewis Ferguson to prioritise starring in red if he wants another shot at pulling on a dark blue jersey.

Dons ace Ferguson followed in the footsteps of dad Derek and his uncle Barry when he was handed a first cap in Copenhagen against Denmark last week.

And he claimed his second when Steve Clarke threw him back into the international fray on Tuesday night, with the 22-year-old midfielder asked to help steady the ship during the tense final five minutes against Austria.

Glass reckons Clarke’s decision to replace starlet Billy Gilmour with Ferguson at a time when a crucial Vienna victory hung in the balance just goes to prove how much faith the Hampden boss has in the Aberdeen man.

But the Pittodrie chief has warned that trust will only last if he maintains his club form.

Glass said: “It’s brilliant to see Lewis get his cap. The call-up was reward for the work and the dedication he’s put in over a number of years. I’m really proud of him. He’s deserved it.

“It’s not a given that you’re going to get called back up but the fact he got put on the pitch a couple of times shows what Stevie thinks of him. It’s important that Lewis knows that.

“But the first part of that is that he stays in this team because if you don’t stay in the Aberdeen team you can’t get picked for Scotland. The fact he was thrown on for the final moments when the result wasn’t confirmed shows what Stevie thinks of him and the trust he has in him.

“There’s a lot of good players in that midfield area but it shows what he’s been doing for us as a club and shows how prepared he is for it.

“If Stevie didn’t think Lewis was prepared and capable, there’s no danger he’d be near the pitch. So it’s kudos for Lewis and kudos for this club.”

Scotland now face a huge clash against Israel at Hampden next month in which their World Cup play-off hopes could be decided.

Glass knows Fergie will be desperate to feature but insisted he has to focus on making his mark at Pittodrie.

He said: “His incentive is do well for Aberdeen in every game he plays and what happens, happens.

“Since we arrived back in April, Lewis has been brilliant.

“I knew how good he was but when you get to work with him every day you get to see he’s a real top professional.

“He’s still got strides to make, he knows that himself, but that’s why he works so hard every day. He’s dedicated to being a top professional. He already is one but he’s going to become a pretty special one.

“It’s brilliant that reward. It would be easy to go away and not get on the pitch but the reward for him is a tangible thing in that he’s got two caps. He feels he’s a Scotland player now. He’s got a different label attached to him, a different persona now.

“He comes back knowing he’s a full Scotland international and that means a lot.”

While Ferguson is establishing himself in Clarke’s group, new signing David Bates is looking for a way back in.

The former Rangers and Hamburg defender won four caps under Alex McLeish but has fallen off the radar since suffering a serious hip injury while on loan at Sheffield Wednesday back in 2019.

Glass, who could hand stopper Bates a debut against Motherwell tomorrow, said: “David has been in and training so we are looking forward to getting him working with us.

“We have a decision to make whether he comes straight into the team or not.

“We know the pedigree he’s got and although he’s not played a lot of football lately he’s looked good in training.

“He’s an aggressive defender who is good at coming out with the ball, so he fits the bill for what we want the team to be.

“So the sooner we get him part of this team and firing the better it will be for us.

“David is back here because he knows what can happen and he sees us as somewhere to showcase his talents.

“Speaking to him and listening to his interviews, he’s looking for somewhere to settle so he can become the top player he should be.

“His opportunities have been a bit limited recently because of circumstances at his clubs.

“But this is a stable place for him and hopefully we can help him back to the international stage. First things first, there’s a team here for him to get in to.”