The Ellen DeGeneres Show a toxic culture on her show

The post Let’s Relive All The Times Ellen Got Owned By Her Guests To Celebrate The Show Ending Tomorrow appeared first on PEDESTRIAN.TV .

and her toxic-ass ways. Somewhere, I just know is smirking. Ah, the OG. The most iconic moment not just on , but on television in general. Who could forget that time Ellen tried to roast Dakota Johnson for supposedly not inviting her to a party and it backfired big time? Have a watch below: This infamous moment was the beginning of the end for Ellen as the allegations of came out not long after. Dakota, we owe you everything. Throwback to that time Ellen took to a supermarket to teach her how to shop like normies do before leaving the White House. What, because Ellen’s so down-to-earth and humble? During their time at the shops, Michelle deadass told Ellen how annoying and childish she was right to her face and truer words have never been uttered. “Ya know? You’re really annoying! It’s like taking a 3-year-old to the store,” she said. Nothing like getting obliterated by the First Lady on your own damn show to humble your ass! Yeah, this one’s pretty fucken bad. One time Ellen invited stand-up comedian and political commentator on her show and didn’t even bother to learn how to pronounce his name. After mispronouncing it multiple times, the Netflix star joked: “At Starbucks, I just go by .” He laughed the whole thing off but seriously, it’s so fucked. Unsurprisingly, was majorly in on the ‘let’s slut-shame ‘ bandwagon back in the day and brought up her dating life many times. Back in 2013 when Ellen made her play a game involving guys she’s dated, Taylor finally snapped back at the host. “It makes me feel so bad about myself every time I come up here you put like a different dude up there on the screen, and it just makes me really question what I stand for as a human being,” Taylor said in frustration. The : OK, this one didn’t actually happen on the show but it’s too good to not include! Beauty YouTuber slammed Ellen DeGeneres while speaking with Dutch publication , describing the host as “distant and cold.” “Call me naive, but I kind of expected to be welcomed with confetti cannons: ‘Welcome to !’ But instead I was greeted by an angry intern who was a bit overworked,” the makeup artist said. “I was expecting a Disney show, but got Teletubbies after dark.” She was even more disappointed when she was told that she’d have to use the public restroom, while other guests had a “private toilet.” “I was not allowed to use the nearest toilet, because it was reserved for the . Why do they get a private toilet, I thought,” she said. That Teletubbies after dark comment bloody KILLS ME. And this is why we won’t miss Ellen DeGeneres or her shitty show. Don’t let the door hit your ass on the way out, doll.
Sign up to read this article 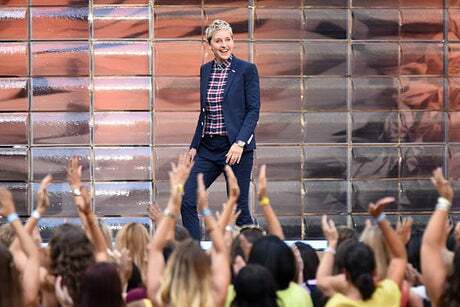 Ellen DeGeneres has experienced an epic fall from grace in recents years following claims she's a 'mean-spirited' person. Here, we…

As the final episode of The Ellen DeGeneres Show airs on Thursday, after 19 years and thousands of guests, there…