WASHINGTON – With significantly less funding for climate programs than the White House requested in the Senate’s nearly $1 trillion bipartisan infrastructure bill, climate advocates are pinning their hopes on a budget reconciliation bill likely to pass only if Democrats can hold disparate wings of their party together.

And even as Democrats are struggling to maintain party unity in support of the tandem bills, conservative Republicans are trying to peel away support for the infrastructure bill among GOP moderates, comparing it to progressive Democrats’ 2019 Green New Deal, which they derided as a socialist manifesto.

The BlueGreen Alliance, which represents environmentalists and labor groups pushing for more infrastructure spending, released a statement Monday highlighting what it said were the bipartisan bill’s shortcomings.

The bill allocates $5 billion for greener school buses, with half of that money going to zero-emission electric buses. But BlueGreen said the $2.5 billion for electric school buses would replace only about 4 percent of the 500,000 largely diesel-powered school buses in service across the country.

The group pointed to the bipartisan bill’s $39 billion in new public transit spending, down from the $85 billion in funding Biden sought in his original infrastructure plan and significantly below even the initial “framework” the bipartisan negotiating group released in June.

And the bipartisan Senate bill would allocate $66 billion to rail, down from the $80 billion the White House requested.

Other climate policies to lower emissions, such as a clean electricity standard or a carbon price, are not in the bill.

“We need to attack climate change head-on. I am deeply worried that even within the two bills there’s not enough,” Sen. Elizabeth Warren, D-Mass., said in an interview. “But they’re not fully baked yet, and it’s possible that more will be added.”

Democratic leaders linked passage of the infrastructure package and the budget reconciliation bill as a one-two punch. They hope to mollify centrists in both chambers who criticized the cost of the reconciliation bill and progressives who called for more transformative and expensive legislation.

Climate advocates are hanging their hopes for more robust action on what is expected to be a $3.5 trillion reconciliation package, which will likely pass in the 50-50 Senate only if all Democrats stick together so Vice President Kamala Harris can cast a tie-breaking vote.

“There’s still time for the reconciliation package,” Matthew Davis, senior director of government affairs for the League of Conservation Voters, said by phone. “I don’t think at all the moment is slipping on climate.”

The infrastructure bill has crossed procedural hurdles in the Senate but now faces the amendment process, while prospects for the yet-to-be-published reconciliation package, particularly one loaded with climate-related provisions, are unclear. Sen. Joe Manchin III, D-W.Va., has indicated he won’t support a package geared toward eliminating the use of fossil fuels.

From a region where the economy has for decades been centered around coal, Manchin is often on the same side of fossil fuel policies as Republicans, though coal-mining jobs have grown scarce and despite clean-energy advocates’ assurances that new industries will bring new jobs.

The House Republican Study Committee, the largest group of conservatives in the chamber, released a memo Monday detailing its top 10 talking points against the bipartisan infrastructure package, a memo that focused repeatedly on the bill’s climate provisions.

The group’s No. 1 argument was that the bulk of the spending in the bipartisan bill is not “true infrastructure” but rather “Green New Deal provisions.”

Another point from the RSC: The bill’s spending on passenger rail “builds on Green New Deal plan to replace air travel with trains.”

In the House, Democrats can afford to lose three of their members on party-line votes, and Speaker Nancy Pelosi, D-Calif., will have to bridge the gap between progressives and moderates in her conference.

Rep. Alexandria Ocasio-Cortez of New York and other left-leaning Democrats have pushed for sweeping climate legislation and said they won’t back the bipartisan infrastructure deal unless it passes alongside a reconciliation bill with significant climate provisions.

“I’m hopeful that we’re going to get something that shows we’re making a significant step towards making an impression on the environment,” Rep. Bill Pascrell Jr., D-N.J., said in an interview.

About 90 percent of the American West is in drought while Lake Mead, by the Hoover Dam, and the Great Salt Lake are both resting at record lows, according to the U.S. Drought Monitor.

Rep. Sean Casten, D-Ill., a member of the House Select Committee on the Climate Crisis, focused during a recent interview on the predicted climate impacts.

“Among the scientists I’ve spoken to there’s a general consensus that we’ve got at least two feet of sea-level rise basically locked in by 2050, even if we went to zero C02 right now,” he said, using the shorthand for carbon dioxide.

“That means Miami Beach is gone. That means good parts of Washington, D.C., are gone. That is within the lifetime of current 30-year mortgages. What the hell are we doing?” he asked. “We are totally out of time.”

A 2018 report by the Intergovernmental Panel on Climate Change, the leading climate science body worldwide, bears out such dour predictions.

It found that warming the Earth’s climate 2 degrees Celsius from its status in the late 1800s, when fossil fuel combustion emerged during the Industrial Revolution, would lead to ice-free summers in the Arctic Ocean, mass die-offs of coral reefs, several feet of sea-level rise, rampant coastal flooding and the increase of “vector-borne diseases,” such as malaria and dengue fever.

The world is on a path to hit and likely surpass 2 degrees in warming, according to IPCC scientists.

Jamal Raad, executive director of Evergreen Action, a climate advocacy group, said people notice climate impacts in ways they haven’t previously, noting how wildfires have sent smoke from the Pacific Northwest across the country this summer.

“They can see it with their own eyes,” Raad said. “They can feel it in their lungs.”

A former staffer to Sen. Jeff Merkley, D-Ore., Raad also said he didn’t think Congress will take up another significant climate bill after the infrastructure and reconciliation tandem.

“This is make-or-break time,” he said. “I don’t think we get another shot at this next year.” 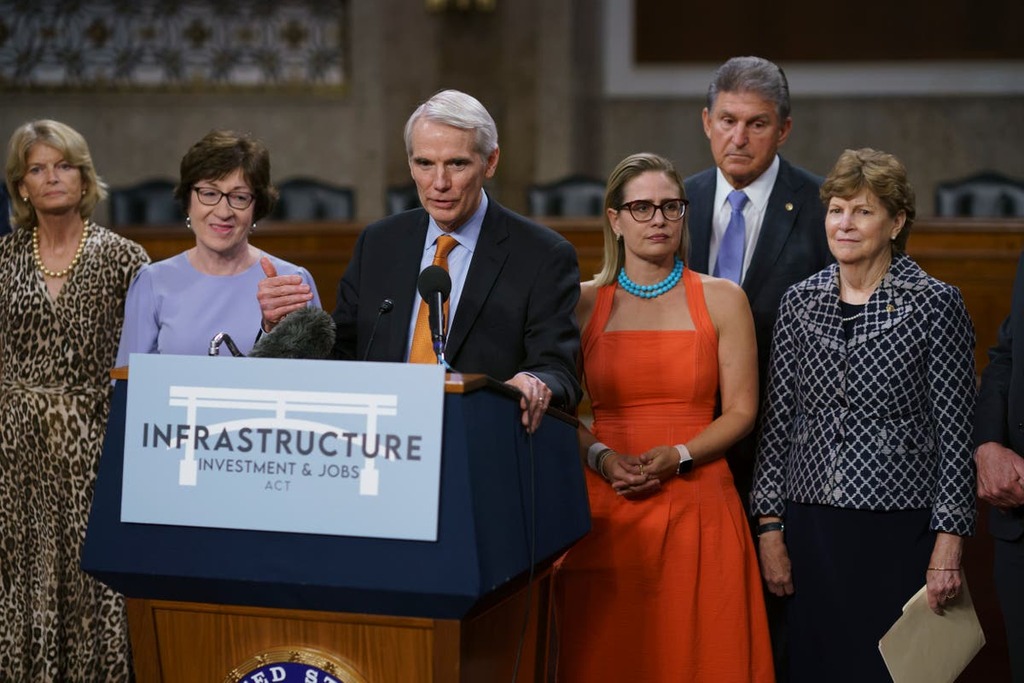 The Independent UK
One subscription that gives you access to news from hundreds of sites
Senate poised to deliver infrastructure win for Biden agenda
The U.S. Senate is heading toward passage this week of a $550 billion infrastructure bill that would provide the biggest…

Tribune News Service
New Bridges, Roads, Internet And More: Here’s What Made It Into The $1 Trillion Infrastructure Bill Backed By The Senate

The 2,702-page bill is expected to pass in the Senate as soon as this week, but its prospects in the…

Forbes
10 things to know about the infrastructure bill
WASHINGTON – The 2,702-page bipartisan infrastructure plan under debate in the Senate is a monster piece of legislation that takes…

Here are five ways of looking at the Senate’s bipartisan proposal.