Leonid Kravchuk, a one-time Communist Party apparatchik who became the first president of an independent Ukraine, playing a central role in the dissolution of the Soviet Union and relinquishing his country’s nuclear weapons stockpile in the aftermath of the Cold War, has died aged 88.

With a population of more than 50 million, Ukraine was the second largest of the USSR’s 15 republics and, with its declaration of independence in 1991, became a pivotal player in the final days of the Soviet era.

Kravchuk reached the height of his power during that period, winning Ukraine’s first popular election in 1991 and establishing a tradition of the peaceful transfer of power when he stepped down after losing a re-election bid in 1994.

His life was bookended by war. During the Second World War, which began when he was five, he lost his father, who served in the Red Army, and witnessed the murder of Jewish people in the Holocaust. In the final months of his life, he again saw his country battered by war, as Russia invaded Ukraine in late February under the orders of Vladimir Putin.

Announcing Kravchuk’s death as the conflict continued, Ukraine’s current president, Volodymyr Zelensky, hailed his leadership during “crisis moments, when the future of the whole country may depend on the courage of one man”.

Kravchuk was by all accounts a masterful politician – a person who, in the phrasing of an old Ukrainian expression, could steal a chicken without upsetting the farmer. A joke circulated that he had no need for an umbrella when it rained; he simply skirted between the raindrops.

Trained as an economist, he served during the Soviet era as head of the propaganda department within the Ukrainian Communist Party’s central committee, and as chair of the legislative body known as the Ukrainian Supreme Soviet, a role that effectively made him leader of the republic.

But during the growing nationalist movement in the late Eighties and early Nineties, Kravchuk evolved into a forceful advocate for Ukrainian independence.

“The metamorphosis of Leonid M Kravchuk is something even a butterfly might find impressive,” wrote New York Times reporter Serge Schmemann. “After more than 30 years as a plodding Communist ideologue conditioned to stomp on any manifestations of nationalism, he has abruptly burst forth as the first popularly elected national leader of Ukraine, dedicated to leading it out of the Soviet Union.”

Asked if his transformation had been motivated, at least in part, by political opportunism, Kravchuk replied, “A man cannot keep the same views all his life. It’s a natural process, but I’ve only changed once.”

He cited his grandchildren, saying that they had feared going to school when he was a top-ranking Communist official. “I wanted them to be proud of me,” he remarked, “not ashamed.”

Kravchuk resigned from the Politburo after Communist hardliners mounted a failed coup against Soviet leader Mikhail Gorbachev in August 1991. Less than four months later, on 1 December, more than 90 per cent of Ukrainians voted for independence. Roughly 60 per cent of those who voted selected Kravchuk for president.

Days later, Kravchuk joined Russian president Boris Yeltsin and Belarusian leader Stanislav Shushkevich in signing the Minsk agreement, which declared: “The USSR has ceased to exist as a subject of international law and a geopolitical reality.” (Shushkevich died on 4 May this year at the age of 87, leaving Kravchuk the agreement’s last surviving signatory. Yeltsin died in 2007, aged 76.)

After the dissolution of the Soviet Union, the United States sought to consolidate the bloc’s nuclear weapons in Russia to avoid a scenario that Serhii Plokhy, a historian of Ukraine, described as a “Yugoslavia with nukes” – a region rife with political and ethnic tensions, where the danger inherent in any conflict would be drastically heightened by the presence of nuclear weapons.

Kravchuk agreed to the Budapest Memorandum of 1994, under which Ukraine gave up its nuclear arsenal, the world’s third largest, in exchange for security assurances.

According to Plokhy, Kravchuk had little choice but to comply because he needed the political and economic backing of the US. He “did the best he could under the circumstances to negotiate”, Plokhy said in an interview, but he “didn’t have much place to manoeuvre”.

Kravchuk expressed immediate reservations over the possible consequences of the agreement. “If tomorrow Russia goes into Crimea,” he is said to have remarked, referring to the Ukrainian region that Putin eventually annexed in 2014, “no one will raise an eyebrow.”

“By its terms, Ukraine forfeited an inherited Soviet nuclear arsenal in exchange for western pledges of aid and ‘assurances’ from Russia, the US and the UK that its borders would remain intact,” George E Bogden, a fellow at the German Marshall Fund of the United States, wrote in The Wall Street Journal in March. “Disarmament experts hailed the pact, but it invited Mr Putin’s revanchism.”

Through his last days in office and beyond, Kravchuk argued that Ukraine could be a bulwark of democracy in eastern Europe.

“Everyone should understand that Russia will never agree to be on the sidelines of the world,” he declared during a visit to the US in 1994. “They could not renounce their 1,000-year history.”

“We can and want to allow the countries of the world the opportunity to stabilise and balance the situation in Europe,” he added. “We can open the doors of democracy to the east.”

Leonid Makarovych Kravchuk was born on 10 January 1934, in the village of Velyky Zhityn, which was then part of Poland.

He studied at a technical school and joined the economics faculty at what is now the Taras Shevchenko National University of Kyiv, working as a teacher before entering politics.

Kravchuk was defeated in his presidential re-election campaign by prime minister Leonid Kuchma. Plokhy, a Harvard University professor and author of The Last Empire: The Final Days of the Soviet Union, described Kravchuk’s decision to allow a peaceful transfer of power as a “contribution ... to the history of his homeland and the post-Soviet space as a whole”.

Kravchuk was married to Antonina (nee Mikhailovna) and had a son. A complete list of survivors was not immediately available.

Oleksii Reznikov, the Ukrainian defence minister, wrote in a tweet after Kravchuk’s death that “with his signature, the Evil Empire disintegrated. Thank you for the peaceful renewal of our Independence. We’re defending it now with weapons in our hands.” 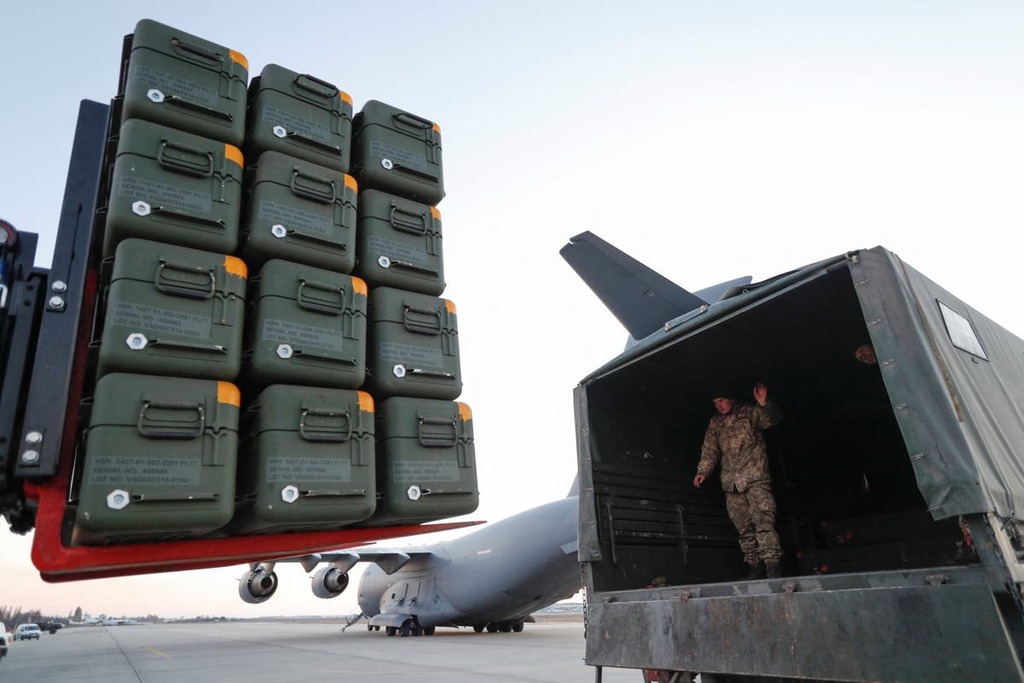 What weapons does Ukraine have to fight Russia and does it have nuclear missiles?
Volodymyr Zelensky continues to urge Europe to send more military support

The Independent UK
One subscription that gives you access to news from hundreds of sites
Leonid Kravchuk, first president of Ukraine, dies aged 88

Former leader relinquished his country’s Soviet nuclear arsenal, the third-largest in the world