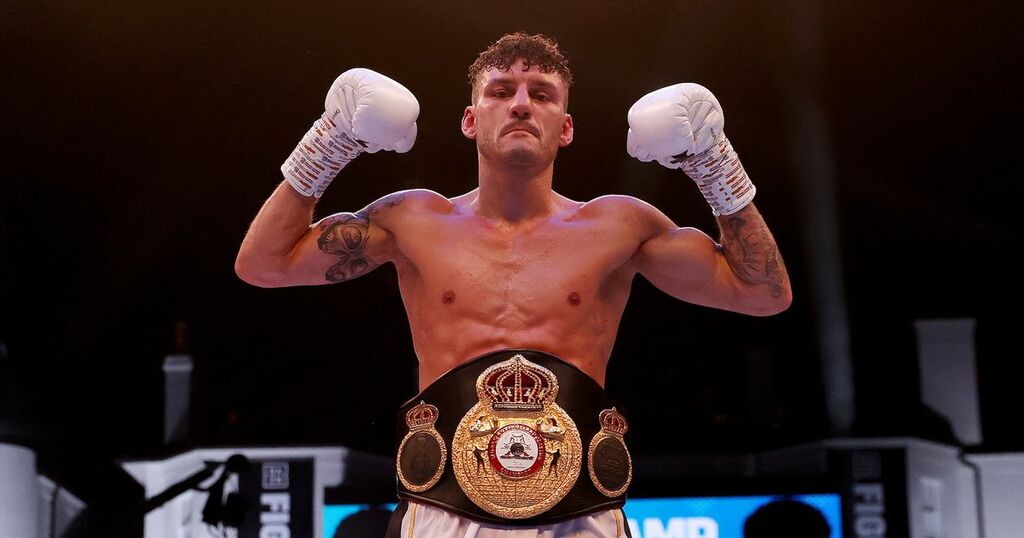 Leigh Wood knows what is at stake when he puts his world title on the line against Michael Conlan in Nottingham on March 12.

It is far more than the physical WBA 'Regular' world featherweight belt he will carry to the ring at the Motorpoint Arena.

For Wood it is a first title defence and the next step on a ladder where he either crashes down a series of rungs, or claws his way up towards the fight he has craved since the beginning.

Wood began his career fighting in leisure centres in the county, sometimes not taking a purse from the night, but if he inflicts a first pro defeat on Olympic medallist Michael Conlan then he hopes to land a fight at the City Ground, home of his beloved Nottingham Forest.

Conlan is the bookies' favourite, and if you listen to the Northern Irishman, he clearly feels he will sweep Wood aside.

Wood, who shocked Chinese fighter Xu Can last time out, is ready for what is to come.

"I don't take any offence to what he says. He's very confident," he told the Garibaldi Red podcast.

"He's been managed very well and he's had to win his fights. I don't want to talk him down because when I beat him, if I do that, people will say 'you said this and you said that about him'.

"I want people to see him as a really good fighter who has an Olympic medal and is an amateur champion. When I beat him it will taste better and look better.

"I'm extremely confident. My old mentor [late Sheffield trainer] Brendan Ingle, bless him, before I even made my pro debut, he would say to me winning a world title is hard, but keeping one is harder.

"All this camp, my mentality has been that this is his world title fight. He'll be bang up for it. I don't want to be known as the kid who has won one and lost it straight away.

"I've got to go one better this camp to keep the title. I've been favourites in fights and I've been the underdog.

"My mentality is it's the same - it's all up for grabs. I need to beat him so I have a challenger mentality.

"Lose this fight I'm back to the bottom of the ladder. I've worked hard to get here and then lose it all.

"It's one step closer to my dream. I want to be the first person to headline the Forest ground, so I have to do a number on this kid to make it happen.

"I've come up the hardest way from small halls. I wasn't signed by a big promoter when I first turned pro.

"Sometimes I didn't get paid. I've boxed for free. I was in the gym when no one was patting me on the back.

"These are things he's never had to do. I've done it all off my own back. When things get hard I can draw on that.

"I can pull myself out of a dark place or a bad round. I've done it before in fights and in my life.

"That could be the difference on fight night."

That did not prove feasible, but if Wood beats Conlan then the 33-year-old feels he will eventually get his wish, saying he is willing to fight again this summer to make it happen.

Even though he will fight in the Arena this time, Wood plans to bring a taste of Forest with him as he walks out to Mull of Kintyre.

He knows the power of boxing at the Arena having done so before, while he also witnessed Carl Froch's famous battle with Lucian Bute.

Conlan has already said fans from his home city of Belfast will take over the venue. Not so says Wood ahead of tickets going on sale soon.

"In that arena it will be a wolf pit. He's talking about bringing loads of Irish people over but the Nottingham fans will turn out and make noise," he said.

"You've seen before what the atmosphere is like there. He maybe thinks he will come over and take over.

"It won't happen. He knows what kind of fight he's in for.

"My profile needs to keep growing. This City Ground fight, it's big numbers. You are talking 30,000 people or more.

"I'm concentrating fight by fight. My focus is on my opponent.

"Michael Conlan thinks he's going to have thousands of people come over and take over the Nottingham Arena.

"That's not going to happen. Nottingham won't let that happen.

"Come be part of it, come make some noise and let's see this challenger off."