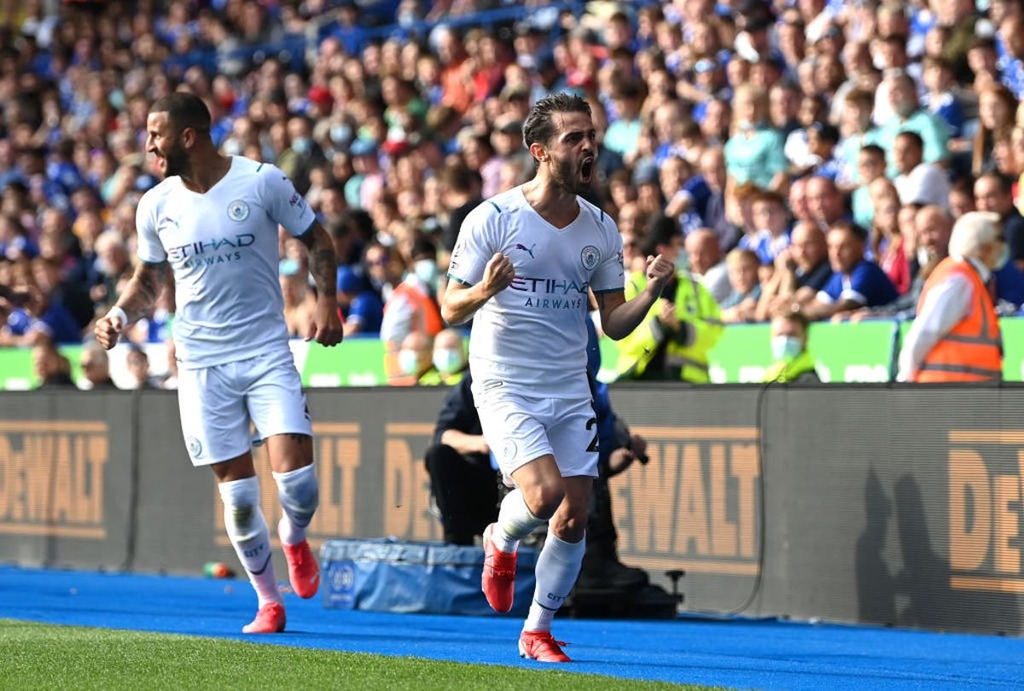 So Manchester United do not have a monopoly on catalytic Portuguese players. Not even in Manchester. On a day that threatened to strengthen the case that Manchester City required a high-class forward, whether or not it was Cristiano Ronaldo, one of their phalanx of technical midfielders instead presented a counter-argument to secure the most auspicious of wins.

Bernardo Silva’s strike was the goal of a predator but City’s performance was something of a statement. Leicester hit the bar and had a goal disallowed as they threatened to repeat their Community Shield win over the Premier League champions but Silva was outstanding and City’s persistence paid off. They lack a player capable of scoring in such quantities as Ronaldo but they have plenty who can chip in and this felt a victory for the kind of midfielder Pep Guardiola accumulates and cherishes.

And so a Portuguese who fancied a summer transfer proved. Guardiola has admitted Silva wanted a move but none materialised. He has nevertheless started the season in fine form and if there was a hint of fortune to his goal, with Joao Cancelo’s shot hitting Caglar Soyuncu and falling obligingly into Silva’s pass, the finish was emphatic and the goal a deserved reward for his elusiveness and relentlessness.

City had racked up the shots – 12 in the first half alone – but, instead of a striker with a scoring pedigree, they had Ferran Torres, continuing his conversion from a winger. Whereas he had tormented Arsenal two weeks earlier, this was a less convincing audition to have the role on a long-term basis. The Spaniard’s best chance stemmed from a defence-splitting pass from Ilkay Gundogan, but the resulting shot was guided into the side netting.

One City applied plenty of pressure; the other resisted it well. A much-changed Leicester defence in which the former Southampton pair of Ryan Bertrand and Jannik Vestergaard both made first league starts for their new club showed resilience and behind them Kasper Schmeichel brought a reliability.

His finest save had come at Silva’s expense, tipping the midfielder’s shot wide. He stopped efforts from Torres and Gundogan. He denied Jack Grealish in injury time. He twice thwarted Gabriel Jesus, who directed first a header and then a crisp shot too close to the goalkeeper. The winger was only cleared to play on the eve of the game after the ban on Brazilians was dropped: it meant Ederson, rather than Scott Carson, manned the visitors’ goal. Guardiola could be grateful for that when he made a terrific block to deny the debutant Ademola Lookman a leveller after another substitute, Kelechi Iheanacho, had forced an opening.

And Leicester’s menace on the counter-attack meant they carried a threat. Jamie Vardy scored a hat-trick against City in September 2020. There was no repeat but when he crossed, Harvey Barnes clipped the woodwork with a header. Vardy, so often the scourge of Guardiola, rounded Ederson to find the net but was offside when Wilfred Ndidi released him.

Leicester contributed much to a high-class game but were nevertheless on the back foot for large swathes of it. Silva and Gundogan evaded them and probed intelligently. Grealish showed more signs he is settling into his new side. City had a cavalry that consisted of Riyad Mahrez, Raheem Sterling and the fit-again pair of Phil Foden and Kevin de Bruyne but they found a way to forge a breakthrough before any were called upon. And, after losing their previous four games away from the Etihad Stadium, they had a victory on the road that suggests that, once again, they are the team to beat. Even without Ronaldo.