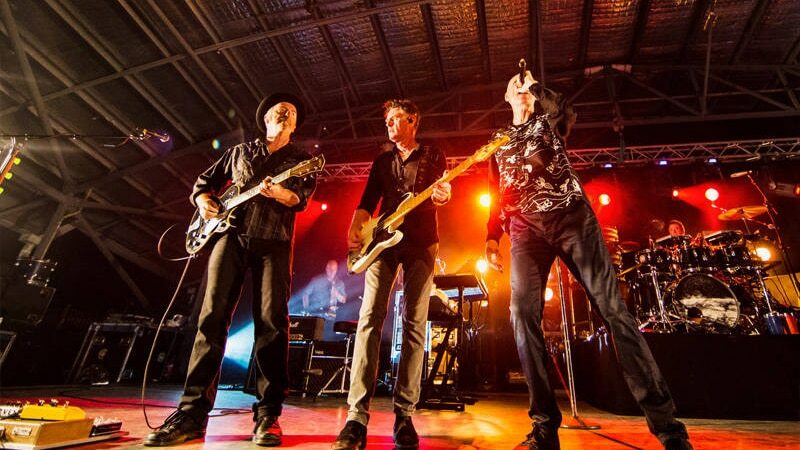 One of Queensland's most unique live music venues, which has seen INXS and Midnight Oil grace its stage, is struggling to keep its doors open due to COVID restrictions and border lockdowns.

The Kuranda Amphitheatre is a sculptured botanical amphitheatre set adjacent to the world-heritage-listed rainforest of Barron Falls National Park, west of Cairns.

The idea for the amphitheatre was first discussed in 1978 when a group of residents approached the Mareeba Shire Council about building a community hall and performance space for the rainforest village.

The amphitheatre was built into the rainforest in 1980 and its first live performance was Don Burrows in 1981.

Now as the venue celebrates its 40th birthday the call is out to keep the gates open.

The venue is community run, receives no government funding and relies on events to fund the upkeep and pay the bills.

Due to COVID, the last major gig to happen at the amphitheatre was Xavier Rudd in 2019 and three major concerts were cancelled in 2020.

Liza Dewey has been the president of the Kuranda Amphitheatre Society (KAS) for the past 5 years and says that the outdoor theatre has always been about the local community.

"Administration, maintenance, repairs, bookings; everything is done by volunteers," she said.

"We don't receive any funding; we rely solely on concerts to bring in money to help with the upkeep of the venue."

Ms Dewey said that it costs about $60,000 a year to keep the venue open and pay the bills.

"It doesn't matter if we have events or if the venue is just sitting there, it's minimum $60,000 a year to keep the doors open," she said.

"We were lucky last year to get a live music support grant, that paid our bills for six months, without that we probably would have closed before now."

Apart from just being a live music and performance venue, Ms Dewey says the Kuranda Amphitheatre is important to the small rainforest village, which has been hit hard due to border closures.

"The amphitheatre has been the heart of this community for over 40 years," she said.

"When everybody gets together there is no separation of class, race or age.

A stellar history of performances

Over the past 40 years the amphitheatre has seen the who's who of Australian music perform on the rainforest stage including: Midnight Oil, Missy Higgins, John Williamson, Paul Kelly, Archie Roach, John Butler and INXS.

The amphitheatre has also hosted international acts like The Wailers, George Thorogood, Mumford and Sons, UB40 and The Band.

"One of the most memorable concerts was John Butler about six years ago," Ms Dewey said.

"There was a cyclone coming and the organisers wanted to move it indoors to Cairns.

"All the punters got on social media and bombarded John Butler not to move it and to keep it at the amphitheatre.

'We need a big concert'

Mareeba Shire Mayor Angela Toppin says that the amphitheatre has a rich and proud history of bringing the community together.

"The Kuranda Amphitheatre is a unique venue set amongst the rainforest at Kuranda," she said.

"The volunteer committee can boast not only bringing world-renowned acts to the Far North, but also to playing an important role in the community by hosting community events and providing a space for not-for-profit groups to host their activities.

Ms Dewey says that the situation is now getting serious and they desperately need help.

"We are very short on the ground for volunteers," she said.

"People can help financially by donating as we are a registered charity or if any companies would like to donate that would be a big help.

"We also need a big concert."

The Kuranda spring festival, 40th birthday and fundraiser is happening on Sunday October 3.