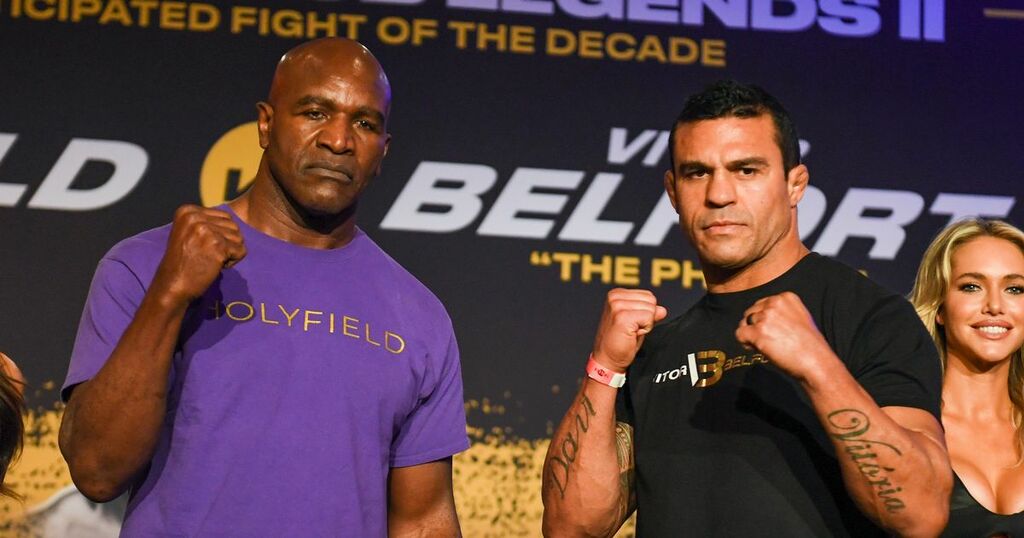 The 58-year-old will make his first appearance in a boxing ring since 2011 against the UFC legend who is 14 years Holyfield's junior.

Holyfield's return has generated much worry among fans and experts, who believe the fight should not have been sanctioned as a professional contest.

And Lampley, who covered the heavyweight legend in his prime, has opted to withdraw from his role as commentator for the fight in Florida on Saturday night.

And the American previously commented his uncertainty on the fight labelling Holyfield as a "different proposition" for Belfort.

“Belfort is part of the seemingly culture-wide MMA urge to prove something about their ability to function as boxers,” Lampley told Boxing Scene.

“It goes without saying that regardless of condition and age, fighting Holyfield is an entirely different equation than fighting De La Hoya. Not really sure whether it is easier or tougher, but after having put in preparation work, it makes sense for Belfort to get paid.

“Evander, I assume, is never totally out of shape – too vain for that. Tyson ‘beat’ Jones, so go ahead and try to set up Holy-Tyson III.”

Holyfield has been subject to more concern by fans, after a training video was released ahead of the clash, which several fans were quick to spot he wasn't as "sharp".

But despite his seeming lack of sharpness, the fight will take place over eight professional rounds of 2 minutes, after the fight was moved from California as the California State Athletic Commission refused to sanction the headline contest.

And the former heavyweight has addressed the concern's around his health remaining adamant that he is in "great shape" ahead of the fight with Belfort.

“Well, the thing is that I’ve been in good shape and I’ve been taking care of my body,” Holyfield told MMA Junkie. “I didn’t have a lot of bad habits that a lot of people have and that’s a big part of it.

This is like a one-off because after every fight I’m like, ‘I don’t know', after each and every fight you have to make a decision: Are you going to do it again or not?’ At any given time if I decided I don’t want to do it no more, it’s O.K.”

Despite the concern, Holyfield has been heavily backed by Belfort's former UFC rival Michael Bisping who is keen for the American to "beat the f*** out" of the Brazilian.

And although Lampley has removed himself from the commentary team, former president Donald Trump will commentate on the clash alongside his son.