Tiger Woods finished four-over par through his first round of the PGA Championship as the injuries suffered in his horror car crash caught up with the golfing icon.

Having performed so admirably at the Masters earlier in the year, the American started on fire in Oklahoma with two early birdies.

However, a series of misfires quickly left him in the mire as his serious leg injury began to take its toll, while Rory McIlroy soared through to take the clubhouse lead midway through Thursday’s rounds.

“I got off to a great start and didn't keep it going,” said Woods, who was often wincing down the stretch on a right leg that was nearly amputated 15 months ago. “I really didn't give myself any looks for birdie. I was struggling trying to get the ball on the green, and I missed quite a few iron shots both ways. It was a frustrating day.”

Woods was optimistic that after making it around hilly Augusta National during the Masters, the right leg that was so severely injured in a car crash would fare well on the reasonably flat, compact layout in Tulsa.

But whether he was fidgeting with a compression wrap on it during his second nine, or using his driver almost like cane as he walked down the fairways, it quickly became evident that the leg was bothering him.

After knocking his tee shot into the greenside bunker on his penultimate hole, Woods grimaced as he walked gingerly back to his bag. He then leaned heavily on it while watching playing partner McIlroy hit his approach shot.

“My leg is not feeling as good as I would like it to be,” acknowledged Woods, who missed last year's tournament at Kiawah Island while recovering. “I just can't load it. Loading hurts, pressing off it hurts and walking hurts, and twisting hurts.”

At one point, Woods had five bogeys during an eight-hole stretch, and he added two more on his final two holes. The result was his worst opening around at the PGA since shooting 75 in 2015, when he missed the cut. “We'll start the recovery process,” Woods said. “And get after it tomorrow.”

Playing in the day's featured group with McIlroy and Jordan Spieth, Woods gave a huge gallery following their very move Thursday an early reason to roar. He hit one of his few crisp approach shots at the par-four 10th and rolled in a birdie to begin his round, then hit his approach to about 13 feet at the long par-three 14th and made another birdie.

But a poor iron off the tee at the par-four 15th led to a bogey, and another poor iron after a perfect drive at the 18th resulted in another. And after making the turn at even, Woods bogeyed three of the first four holes on the front side, then added those two to finish — including at the ninth, where he flubbed a chip shot from above the green.

McIlroy aggressively hit drives just about whenever he could, while Woods conservatively hit irons off several tees in the hopes of finding the fairway. But the result was that the Northern Irishman was often 100 yards closer to the green, leaving him mid- and even short-irons for his approaches, and helping to produce a five-under 65 and the early lead.

Spieth also hit with his driver whenever possible, though it didn't do him as much good. He struggled to a two-over 72, leaving him in need of a low score Friday as he pursues the missing piece of the career Grand Slam.

Woods will also need a big second round at Southern Hills, but he can take comfort in having done it before. He shot 63 on Friday to seize control of the 2007 PGA, then cruised through the weekend to his fourth Wannamaker Trophy. Then again, that was a long time and many injuries ago.

“Lots of treatment, lots of ice baths,” Woods said as he looked ahead to his post-round routine. “Try and get the inflammation down and try and get ready for tomorrow.” 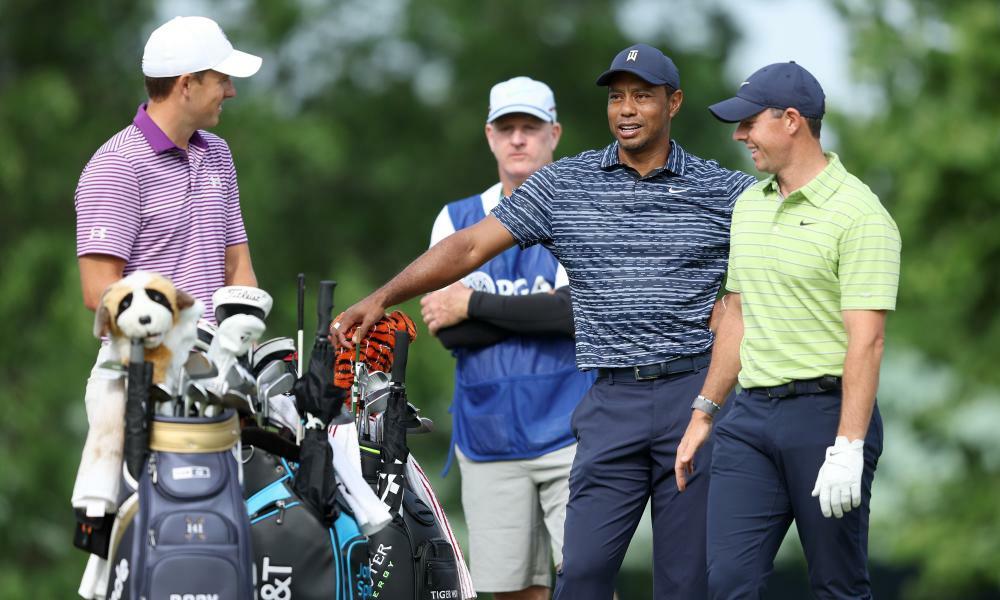