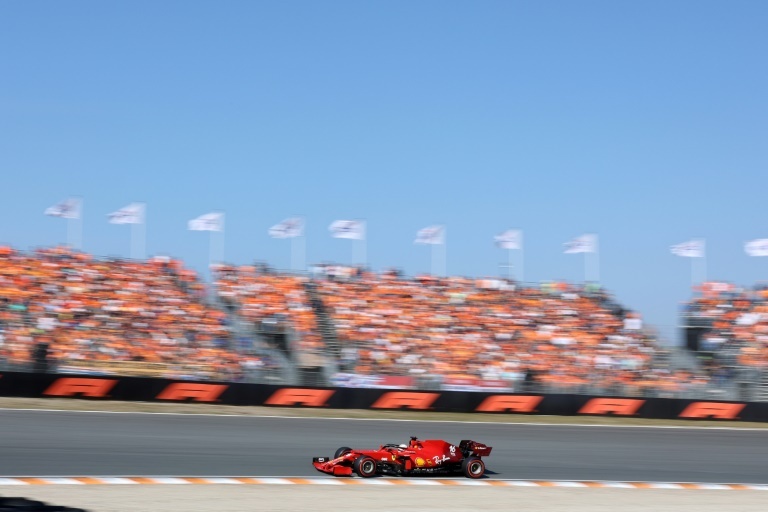 Monza (Italy) (AFP) - Ferrari's Charles Leclerc has called for the 'tifosi' to generate a crazy Dutch-style atmosphere as he bids to gate-crash the championship contenders’ title scrap at the Italian Grand Prix.

The Monegasque, who won Ferrari’s home race at Italy’s ‘temple of speed’ in 2019, wants the fans at Monza to recreate the carnival atmosphere seen at Zandvoort last weekend where 70,000 Dutch fans enjoyed a noisy beach party and roared Max Verstappen to victory.

"Monza is always special for the drivers and the team," said Leclerc.

"It is our home and we can feel the support.I will remember 2019 for the rest of my life."

Monza is set to allow around half-capacity crowds of 50,000 this weekend, following last year’s behind-closed-doors race won by Alpha Tauri’s Pierre Gasly, with another titanic scrap between Red Bull’s Verstappen and seven-time champion Lewis Hamilton of Mercedes in prospect.

"It will feel good to feel the support," said Leclerc.“And I hope we can see the same kind of craziness that we saw for Max, but this time for us!”

While Leclerc hopes to see a rampant Ferrari winning again, it is more probable that Hamilton, seeking to become the first driver to win 100 Grands Prix, will bounce back as he seeks an outright record sixth Monza triumph and first since 2018.

He shares the current record on five wins with Michael Schumacher, having finished seventh last year after being penalised for entering the pit-lane when it was closed.

"I expect Monza will suit Mercedes as it hasn’t been our best track for a few years,” said Verstappen, whose wins in Belgium and the Netherlands have lifted him three points clear in the title race.

"But if we continue what we have been doing, working well as a team and nail every detail we can be competitive.But I do think Mercedes may have a top-speed advantage.”

Verstappen has never won at Monza and Red Bull have not won since 2013, but he will be seeking to complete a hat-trick of successive Sunday successes since the summer break to extend his lead.

"We are trying as hard as we can," said Hamilton, who struggled to match the Red Bull’s pace last weekend.“We had a couple of races where we seemed to be on a par with them, or slightly ahead, but I think they took a big leap.

"We just have to keep our heads down, keep working, keep pushing.”

The ‘new’ weekend schedule will include the sport’s second ‘Saturday Sprint’, as pioneered at Silverstone.A Friday qualifying session will create a grid for a short race on Saturday to deliver Sunday’s grid and offer bonus points.

Verstappen collected the victor’s laurels and three points at Silverstone where Mercedes “learned some important lessons” according to team boss Toto Wolff.

After confirming this week that George Russell will replace Valtteri Bottas alongside Hamilton next year, Wolff will hope his team recover some of the poise and power that carried them to five straight Monza wins from 2014, but he knows Ferrari could be a threat too.

Alfa Romeo will also enjoy home support and confirmed that Robert Kubica will continue to substitute for Covid-19 victim Kimi Raikkonen, who has been unable to test negative since contracting the virus last weekend.