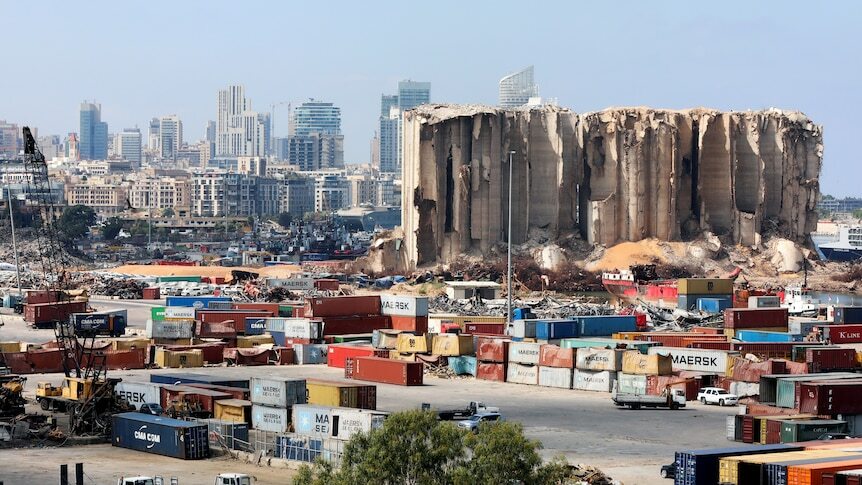 At the beginning of this year, Elena Eassey was forced to withdraw from university halfway through her course, pack up her belongings and start a new life in a country she had never been to: Australia.

It was the "unbearable" financial and social issues that drove the 22-year-old to leave Lebanon, despite her love of the country.

The heart-stopping impact of the blast at Beirut's port last August cemented her decision.

"The cherry on top was when the explosion happened," she said.

"It [has caused] an economic collapse, people are trying to survive, the prices are rising, everything.

"There's riots on the streets. There's a revolution happening. They're burning tires.

The tragedy that is happening alongside the country's once-in-a-century economic meltdown is the exodus of its best and brightest.

Encouraged to leave by her parents, Elena, with sister Christelle, arrived at a cousin's home in Sydney's inner-west suburb of Croydon Park on Christmas Day.

Christelle described her shock when she first arrived and could not fathom spending $10 on nail polish, worth about one week's minimum wage back home.

Elena and Christelle are not alone. Unlike their parents, Lebanon's younger generation is not fleeing bombs, but an economy in a tailspin.

The job market has sharply contracted, with the World Bank estimating one in five people have lost their jobs since October 2019, leaving students in the country with little to look forward to.

Having an Australian passport by descent made the sisters' move easier, but others are not as lucky, according to the acting Lebanon program director at the Middle East Institute in Washington DC, Christophe Abi-Nassif.

"The human infrastructure of the country is effectively disintegrating … the problem is that this very often ends up taking place slowly and gradually."

Highly skilled professionals — doctors, engineers, business owners — are often the first casualties of economic crises like Lebanon's, and the trend is worrying.

The shortfall of skilled labour is being felt most acutely in the healthcare sector, with the World Health Organization sounding the alarm on the "devastating" impact of a mass exodus of medical professionals.

"That is very serious. Its impact will last for many years to come."

The WHO estimated 2,000 doctors and 1,500 registered nurses have already left the country in search of opportunities elsewhere.

Dr Myrna Doumit, an associate professor of nursing at the Lebanese American University, said private hospitals across Beirut began to reduce nurse's salaries last year, and forced staff to quarantine at their own expense if they contracted COVID-19.

"They all want to leave the country, unfortunately," Dr Doumit said.

Even newly graduated nurses do not want to accept job offers, and hundreds of nurses are making their way to nearby Gulf states, lured by market-rate salaries and better working conditions, according to Dr Doumit.

"Because of the loss of experienced staff, they were putting more patient load on the remaining staff than what a human being can really take, like 15 to 20 patients per nurse, and this is extremely dangerous," she said.

"You have people ringing us or sending me emails saying, 'Please, can you help us get to either Australia or anywhere in the world'.

"I just say, 'It's not that simple. You have to go through the whole [accreditation] process all over again'."

Dr Ahmar said medical professionals have "had enough", and do not see a future in Lebanon.

Lebanon's "brain drain" is a slow, insidious symptom of its deep economic depression.

Almost three quarters of the population is living in poverty, according to a recent report from the United Nations Economic and Social Commission for Western Asia.

Most people are paid in the local currency in Lebanon, where the national minimum wage is about 675,000 Lebanese pounds.

At the official exchange rate, that's worth just over $600 but, in reality, it barely amounts to $40 on the black market, which is the only way many Lebanese can access cash in dollars.

The Crisis Observatory Centre at the American University of Beirut — which tracks the impact of Lebanon's economic crisis — has dubbed the emigration phenomenon a "third exodus".

Lebanon's history is full of crises that have forced people to flee.

The first major exodus was after World War I, in the early 20th century, and the second, during Lebanon's prolonged civil war in the '70s and '80s.

As a result, the country's diaspora is up to three times the population of roughly 6 million, according to some estimates.

The observatory's program coordinator, Ola Sidani, said this time all signs are pointing to a huge brain drain.

While the data for this third wave of emigration is being collated, the first two waves saw more than a million people leave.

"I think this immigration is irreversible," Ms Sidani said.

Karl Ghosn, 20, is relieved he applied to study in Melbourne last June.

"I feel like life would have been a lot more difficult than it is for me now," he said.

"With the lines at the petrol station, the dollar changing, and the price of everything going up, it would have been very, very hard to live there."

He's left behind a broken homeland and a political system brought to its knees.

The World Bank estimates it could take up to 19 years for the county to recover from this economic meltdown.

Many young people don't see a reason to establish themselves in a country where they fear disappointment.