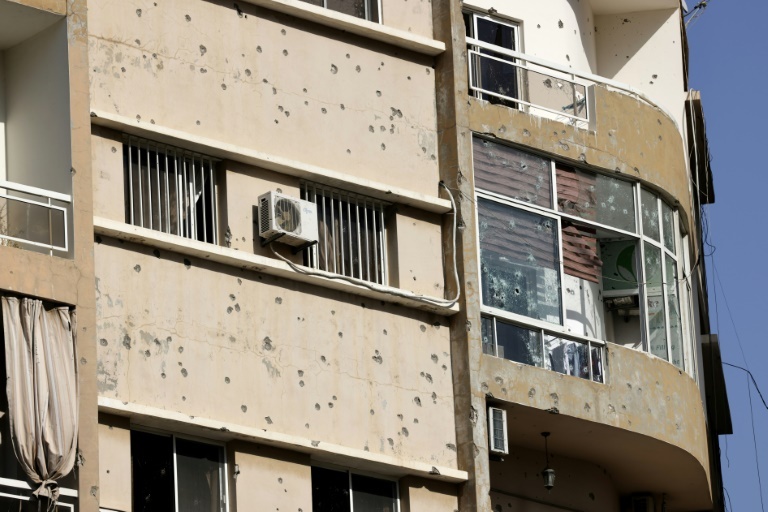 Beirut (AFP) - Bullets riddling residential facades, snipers on roofs, residents crouching inside their homes -- the scenes that filled the streets of Beirut Thursday were all too familiar to many Lebanese.

The same militia groups, the same neighbourhoods: the news flashes and blame game that flooded social media as a protest descended into deadly chaos in the Lebanese capital read like headlines from the 1975-1990 civil war.

The violence centred around Tayouneh, an area which lies at the crossroads of Shiite and Christian militia bastions that were battlegrounds in the civil conflict that ended three decades ago.

It all started in the morning during a demonstration by supporters of the Shiite movments Amal and Hezbollah who want the judge leading the investigation into last year's deadly port explosion removed.

Sniper fire of unconfirmed origin hit a group of protesters sparking an intense response, mostly led by Amal fighters who came out in large numbers, armed with rocket-propelled grenades and assault rifles.

They took aim at residential buildings on the edge of the Christian neighbourhood of Ain al-Remmaneh, which is separated from the Amal stronghold of Chiyah by a road that once marked a key demarcation in the civil war.

They were picked off by snipers which Amal and Hezbollah accused of belonging to the Lebanese Forces Christian militia, though the latter denied it.

Amal is headed by veteran parliament speaker Nabih Berri and the Lebanese Forces by Samir Geagea.Both warlords-turned-politicians have headed their groups for 41 years and 35 years respectively.

It if weren't for the cars parked on the streets, one could be forgiven for mistaking Thursday's footage of the fighting for archives from the 1980s.

Mobile phone video shared on social media Thursday showed children huddled together against a wall in their classroom to shelter from stray bullets raining on their neighbourhood.

At least one of the six people confirmed to have died was a 24-year-old woman stuck in the head by a bullet that came through the window.

Sahar is 41 -- she was born in the middle of the Lebanese civil war and Thursday's flare-up revived traumatising childhood memories.

"Since the morning I've been getting messages from friends who grew up with me in wartime, lamenting that a whole new generation now has to go through the same experience," she said.

"It's a terrifying thing that makes us aware of the past, the present and the future...as if we were stuck in a time loop," she told AFP.

"They are the same people, the same faces in war and in peace, these people who rule us today and are cooking our future."

The civil war left Beirut in ruins and an estimated 150,000 dead.Thousands more are still missing today and the absence of justice has kept the scars on the national psyche very raw.

'Saw myself as a child'

The same militia bosses who dragged the country down into chaos nearly half century ago are still in power.

One of the world's largest non-nuclear explosions and one of the most spectacular financial meltdowns in recent history weren't enough to bring them down.

When Maryam Daher, a 44-year-old mother of two, saw civilians running for safety from the sound of gunfire on television, she broke down.

"It all came back to me," she said."At the very same moment, I received a message from my son's school asking parents to come and collect the children."

"I started wondering in which corridor residents of Tayouneh were crouching today and I just collapsed in tears as I saw myself as a child hiding in our building's hallway," she said.

Snipers were back on her neighbourhood's roofs today and the dread that Thursday's violence sparked is deep-rooted in a shared experience.

Ain al-Remmaneh is the neighbourhood where a Christian militia shot up a bus on April 13, 1975, a massacre which is often presented as the spark that ignited the civil war.

"The idea of a new war breaking out terrifies me.I just can't go through the same thing again.I want to leave this country and protect my son," Daher said.