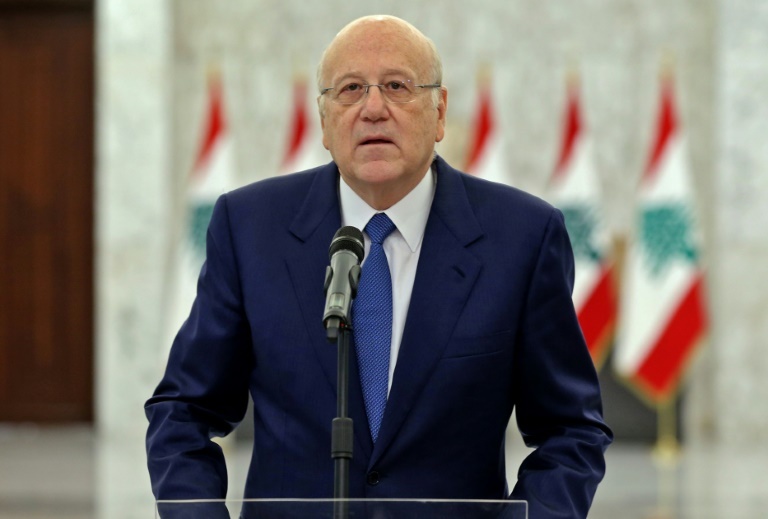 Beirut (AFP) - A Lebanese government has been formed, the presidency announced Friday, ending a 13-month impasse as the country grapples with one of the worst crises in its history.

A new cabinet was a condition for much-needed international assistance but it remains to be seen whether it can deliver requested reforms and rescue Lebanon from bankruptcy.

Mikati, Lebanon's prime minister for the third time and the country's richest man, made a statement from the presidency in which he vowed to leave no stone unturned in efforts to rescue the country.

"We will make use of every second to call international bodies and ensure the basic everyday life needs," he said, adding his government would also turn to Arab countries for help.

Mikati, who was designated as prime minister in July after his two predecessors failed to clinch an agreement on a new line-up, unveiled his list of ministers.

The newcomers include many technocrats but each minister was endorsed by one or several of the factions that have dominated Lebanese politics since the 1975-1990 civil war.

Protracted efforts to agree on a government have been viewed with scepticism at best by the public, with many suspecting that the same political parties that have ruled Lebanon for decades were unlikely to yield radical change.

The country's hereditary political barons have so far appeared impervious to international pressure, which intensified after a deadly explosion at Beirut port on August 4, 2020.

One of the world's largest non-nuclear explosions killed more 200 people and was widely blamed on government incompetence and corruption.

Sami Nader, a Lebanese political analyst, argued there was little hope for a breakthrough if the dynamics that prevailed during the cabinet line-up negotiations remained in place.

"The continuation of quota politics and bickering over every reform and decision would mean no departure from what the caretaker government was able to do," he said.

"It was the same cooks who formed this government, so can they offer a different meal," he asked.

Lebanon has been run by a caretaker government since August 10, 2020 when premier Hassan Diab and his cabinet resigned en masse following the deadly port explosion.

The state can no longer provide mains electricity to its citizens for more than a few hours a day, nor can it afford to buy the fuel needed to power generators.

The local currency has lost more than 90 percent of its value, entire segments of Lebanon's six million inhabitants are sinking into poverty and those who can are emigrating by the thousands.

Very few of the international community's demands for a broad programme of reforms have yet been met, hampering the disbursement of foreign assistance.

Further stalling the bankrupt state's recapitalisation has been the government's failure to engage the International Monetary Fund and discuss a fully-fledged rescue plan.

"The new government will have to prepare legislative elections and ensure they are held on time," the analyst Nader said.

Parliamentary polls are due next year, with many pinning their hopes on the ballot bringing in fresh blood but others doubtful that an unchanged electoral system can change the game.

"There is practically only one door on which to knock for this government and that is the International Monetary Fund, because there is no other way out of the crisis," Nader said.