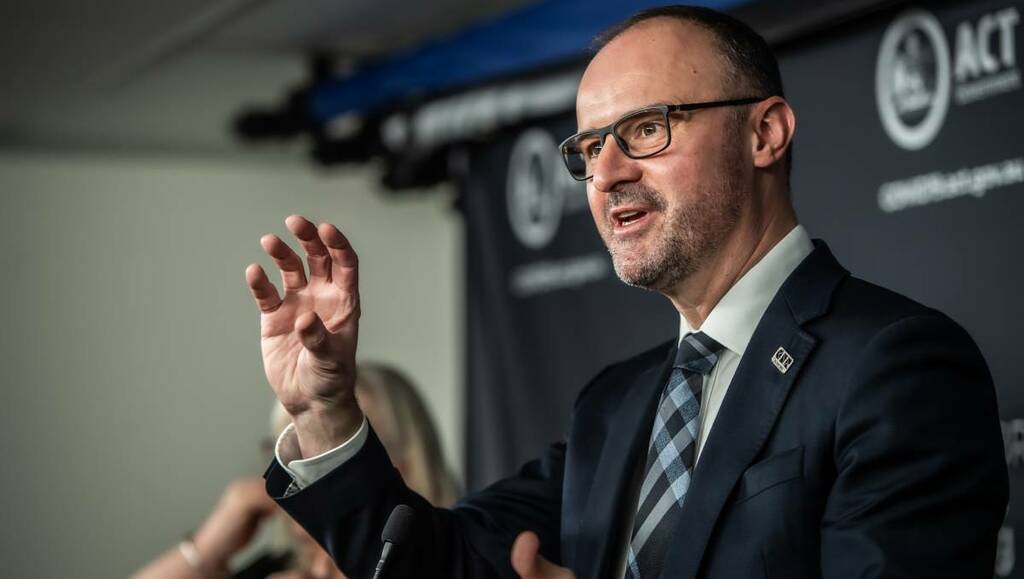 The ACT's chance of coming out of lockdown next week appears increasingly unlikely as more than half of the territory's COVID-19 cases reported in the past week have spent time in the community while infectious.

Chief Minister Andrew Barr said he still hadn't given up hope of the territory reaching so-called COVID zero, but warned even when the lockdown did ease, Canberrans would be subject to strong public health measures in the months to come.

"I'm not going to give up on the suite of public health measures that bend the curve, but it's clear that we're not going to have double zero days tomorrow or the next day," he said.

It was revealed on Wednesday, the hospitalisation rate of Canberra's outbreak sits at 8 per cent but ACT deputy chief health officer Dr Vanessa Johnston said she was confident hospitals could handle the caseload.

There were 20 new cases of COVID-19 reported in the ACT in the 24 hours to 8pm on Tuesday.

Less than half the cases had a confirmed link on Wednesday morning, with the source of 11 cases under investigations.

There were seven cases infectious in the community, seven were in quarantine for their entire infectious period and the infectious status over six is under investigation.

Mr Barr has been adamant that the end of Canberra's lockdown would be contingent on a run of days where there had been no cases infectious in the community.

However, he stressed on Wednesday that any easing of restrictions would be gradual, as set out in the national plan.

The plan, based on modelling from the Doherty Institute outlines low, medium and high public health measures.

Mr Barr said the territory was currently subject to high public health measures and the next step was to transition to medium measures.

Examples of activities that could be allowed under medium public health measures include increased retail activity, seated dining for small groups at restaurants and cafes and five visitors to a household.

"The next phase of our journey is to transition from high to medium."

Dr Johnston said the rolling five-day average of new cases was going down, but expressed concern about an upward trend of cases infectious in the community over the same period.

"We're not particularly happy with that, so that still remains a concern for us," she said.

Of the 150 cases reported from September 1 to September 8 in the ACT, 80 cases have been confirmed to be infectious in the community. That number is likely to be higher as the infectious status of 17 cases has not been publicly confirmed.

The total number of unlinked cases in Canberra's outbreak is 40.

There have been 424 cases since the outbreak started on August 12, including 193 people who have recovered from the virus. There are 231 active cases.

Throughout Canberra's outbreak there have been 34 people hospitalised with the virus. Six people have required treatment in the intensive care unit.

Dr Johnston said Canberra's hospitals had managed with this number.

"Certainly they're doing really, really very well at handling the cases they have there now and I know there is more capacity coming online as well, so very happy with that," she said.

The ACT had another record day of vaccinations on Tuesday, with 4737 doses administered. More than 80 per cent of the ACT's over-70s are vaccinated, which Mr Barr said he believed was an Australian first.

More than 5700 Canberra businesses have applied for the ACT and federal government's jointly-funded support grants, which is available to businesses that have suffered a downturn as a result of the lockdown.

An extra 1852 businesses have started their applications for the grant, which can be up to $20,000.

Mr Barr said that $6.9 million had already been paid out to more than 400 businesses.

But he said that one in three businesses that had applied had given incorrect information and this had held up the process.

He also said other businesses had applied that had gone into administration or were not registered for the GST.

"I do want to send a clear message to anyone who thinks they can try and scam this system, you can't it is being checked," Mr Barr said.

The ACT's opposition has been critical of the slow payments, but Mr Barr said the rollout was faster than the NSW scheme.

"We have more than 100 people working seven days a week assessing applications and we've already paid out nearly $7 million," he said.

"Some payments made within seven days of the scheme open. Comparative with NSW, that's two to three weeks ahead of their rollout of their equivalent scheme."

Our journaliss work hard to provide local, up-to-date news to the community. This is how you can continue to access our trusted content: