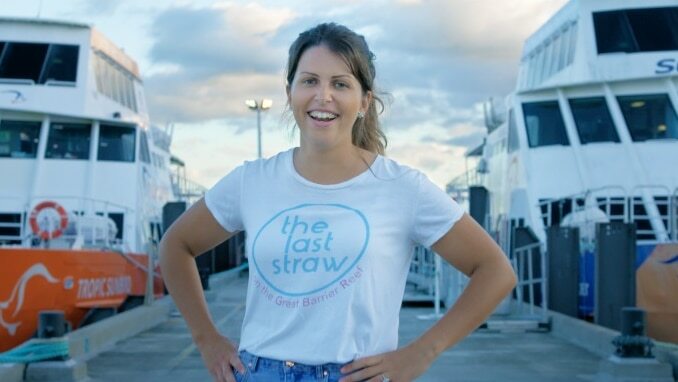 In 2019, more than 550,000 plastic straws were occupying a bedroom in the home of Cairns marine biologist Nicole Nash.

She had collected them from businesses that had phased out straws under her five-year source-reduction campaign to keep harmful plastics out of the Great Barrier Reef.

Since the project's inception in 2016, Ms Nash has removed 22 million straws from circulation across Queensland by enlisting 377 businesses — from Bundaberg to the Torres Strait — to go plastic-straw free.

With the Queensland government's ban on single-use plastics coming into effect last week, the creator of the Last Straw on the Great Barrier Reef campaign says she is glad to have been made "redundant".

When Ms Nash started the campaign in 2016 she was a Masters student, so she knew an effective campaign needed solid data.

She began by asking venues how many straws they used each year.

"I gave a breakdown of straws being used by each venue, so the government could say, 'Okay, we have 180 nightclubs in Queensland'.

"Based on the data I collected, a major nightclub was using nearly 1 million straws a year.

"Cumulatively, they could work out how many straws were being used across Queensland."

Ms Nash then began meeting with businesses, having two to three coffees in a weekend, to get them on board with the plan.

"Some weren't very happy to have a conversation," she said.

"Some people have these horrific memories of paper straws that just go instantly soggy and others also thought that it would cost a lot more for them to switch to paper straws."

One by one, businesses across Queensland hopped on board, and as the campaign's footprint grew, so did the workload.

"It was very busy. I was doing about 20 hours a week, just working on the Last Straw, probably for at least two years straight, as well as working 38 hours a week full-time."

In August last year, Ms Nash was invited to speak before members of the Queensland Parliament and deliver data on her quest.

"Over the last five years, looking at our data, that's been 22.5 million straws being saved from being used," Ms Nash said.

Before a major Cairns nightclub phased out plastic straws about three years ago, patrons were using about 10,000 straws each week.

The Woolshed, one of the 377 venues that phased out straws in conjunction with the Last Straw campaign, has saved about 1.5 million straws from going to landfill.

Owner Dominic Davies said there were some challenges in transitioning away from plastic, but patrons quickly adapted.

"It was quite a big deal at the time because people weren't used to not having straws, but once they got the hang of it, it was fine.

"We only put paper straws in when people ask. They're recycled paper straws and they're a lot more expensive, but we use a lot less of them."

Ms Nash said she was surprised by how many businesses had already chosen to eliminate single-use plastics, ahead of the ban.

She said change came about sooner than she had expected.

"At the end of the day, it's these businesses who have done the right thing without the legislation and the government telling them to."

Ms Nash is now working on follow-up research, and is calling for all businesses that originally signed up to the program to complete a survey to track the campaign's ongoing effectiveness.

They were made into a chair on the Cairns Esplanade to demonstrate the effectiveness of a circular economy.