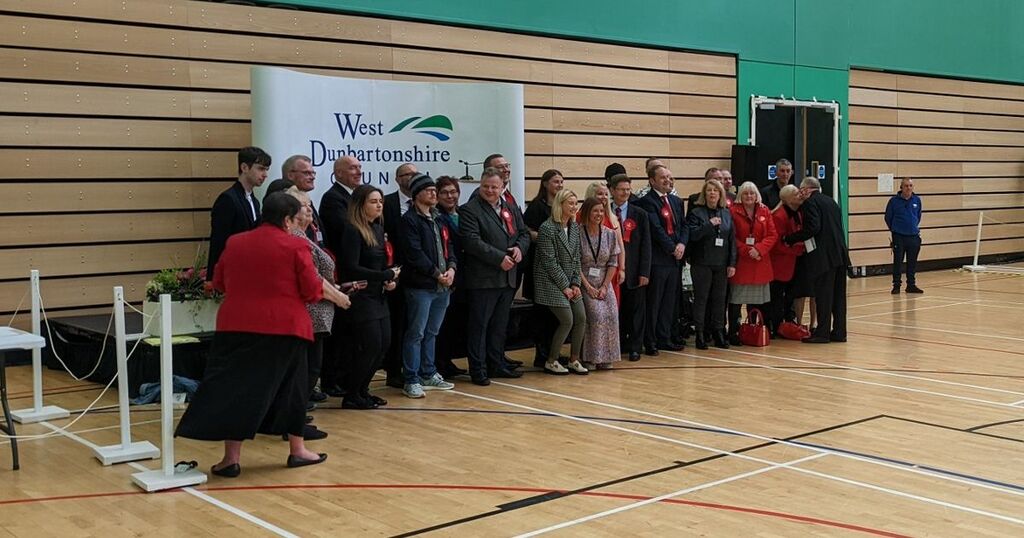 Labour vow to "hit the ground running" after taking control of West Dunbartonshire Council
The party gained four additional seats, taking an overall majority - and control of the council from the minority SNP…

After claiming as majority, the new Labour council have unveiled plans to help people through the cost of living crisis.

LABOUR have taken overall control of a Scottish council for the first time in a decade.

NICOLA Sturgeon has said she is “open” to replicating the powersharing agreement at Holyrood in council chambers, but will leave decisions up…

Stunning election results at West Dunbartonshire Council have seen a landslide victory for Labour, allowing them to form a majority administration for the next five years.

Each of the 12 Labour councillors standing for election won their seat, meaning that party has gained overall control of the 22 seat local authority.

West Dunbartonshire was formally a hung council, with the SNP and independent councillor Denis Agnew forming the administration. On Friday however the SNP won nine seats - a decrease in one , while the Conservatives lost both their seats.

Labour councillors say they were over the moon with the results and the faith placed in them by the public.

Group leader and councillor Martin Rooney said “I am absolutely delighted with the results. It has been a long campaign but it has paid off and we won all 12 of our seats. That is a credit to our candidates. You can never tell what is going to happen but we wanted to win back the council.

“It is not a complete surprise but you never know what will happen until the boxes are emptied. We are a majority administration with 12 out of 22 councillors elected.

The result was made more remarkable because the single transferable vote system used in Scotland is meant to produce more proportional results, rather than big majorities. In 2017, no party managed to win a majority on any Scottish councils.

Labour councillors thanked the voters that had elected them and vowed that it was “time for change”.

Councillor Lawrence O'Neil who has been elected for a third term said: “We are delighted that Labour has won back control of West Dunbartonshire Council. I want to say thank you to all the voters who have placed their faith in us.”

Councillor Daniel Lennie added: “My ward colleague Gail Casey, who has just stood down after 19 years, taught me everything I know and I am delighted to have been elected for a second term alongside June McKay.”

June McKay, a first time candidate, said: “I am really looking forward to the next five years. I want to thank everyone who has stood beside me. It is time for change now.”

Following the election results SNP leader and former leader councillor Jonathon McColl of West Dunbartonshire Council thanked those who had re-elected him for another five year term.

In a tweet to his followers he said he would “hit the ground running” in forming an opposition party.

Councillor McColl said: “I would like to thank everyone who voted in Thursday's election, especially the 1494 people who gave me their first preference vote, re-electing me to serve my community for another five years.

“Rest assured, we will hold the Labour administration to account for the things they have promised and the things they do, and we will continue to build support for independence in our communities as we get closer to next year's planned referendum.”

The local authority is now made up of 12 Labour councillors, nine SNP councillors and one community party councillor.

A list of the newly elected councillors can be found below:

Labour vow to "hit the ground running" after taking control of West Dunbartonshire Council
The party gained four additional seats, taking an overall majority - and control of the council from the minority SNP…

After claiming as majority, the new Labour council have unveiled plans to help people through the cost of living crisis.

LABOUR have taken overall control of a Scottish council for the first time in a decade.

NICOLA Sturgeon has said she is “open” to replicating the powersharing agreement at Holyrood in council chambers, but will leave decisions up…