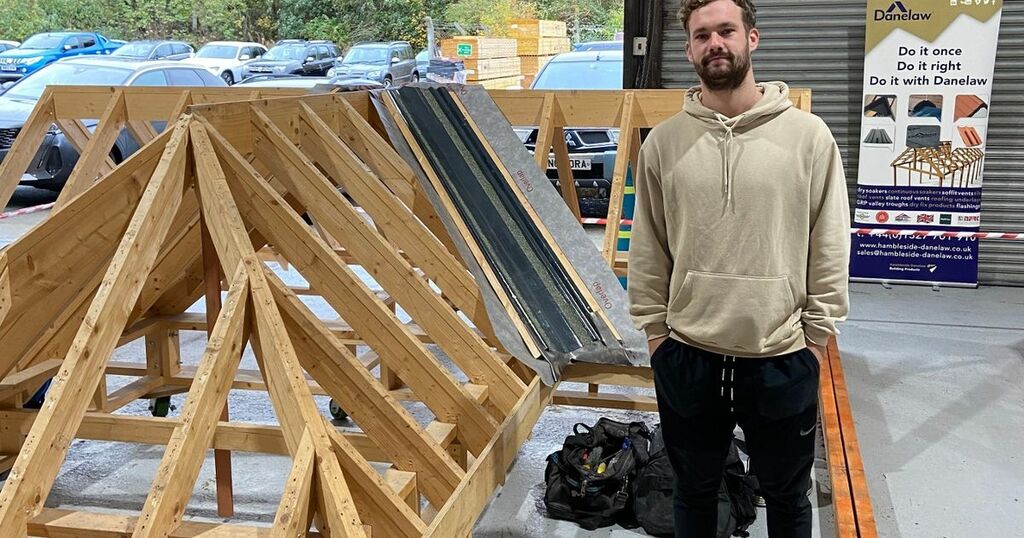 Jordan was one of six student slaters from colleges across the UK who competed head-to-head in the National Federation of Roofing Contractors (NFRC) contest which was held last week at the Centre of Roofing and Excellence in Hereford.

And he scooped a prize-winning trip to Spain and a £750 cheque after winning the prestigious Great British Slate Off 2021 award.

Jordan who is employed by Owen’s LRJ Roofing while also attending the East Kilbride-based college, was one of six student slaters from colleges across the UK who competed head-to-head after winning their heat at their home college.

He sped to victory by showing off his roof slating skills in accordance with the competitions strict specification and within the given time constraints.

Jordan was judged by NFRC’s national judges and International Federation for the Roofing Trade (IFD) mentors, Bob Coutts and Matt Timby, who were looking for craft knowledge, hand skills, precision and time management.

As the winner of the award, Jordan will receive an all-expenses paid trip to Spain with his tutor courtesy of Cupa Pizarras to visit one of their quarries, as well as a free City and Guilds Traditional Basic Leadwork craft course, courtesy of the Lead Sheet Training Academy (LSTA).

Jordan will also be awarded the Mason-Elliot Award by the Worshipful Company of Tylers and Bricklayers and will be considered for the GB team for the IFD World Championship for Young Roofers.

He was overseen at the competition by his lecturer, Ross Hepburn.

Ross, who will join Jordan on his trip to Spain said: “Jordan showed all his hard work, both in college and on-site under guidance form employer Owens LRJ Roofing and the college roofing section, has been well worth the effort.

“Here at SLC, we encourage all students to participate in competitions in all trades.

"To win the Great British Slate Off has certainly been a highlight of a trying past few years.

"Now we are hopefully nearing the end of the pandemic I hope competitions like this will become a normal part of the college calendar again as they are certainly worthwhile in allowing students to showcase their work across the nation”.

NFRC’s Training Manager, Simon Dixon added: "The marking and final scores were extremely close, as you would expect for young roofers of such high calibre, a tough job for Bob Coutts and Matt Timby to judge.

"My congratulations go out to Jordan and his tutor Ross—this is a fantastic achievement."