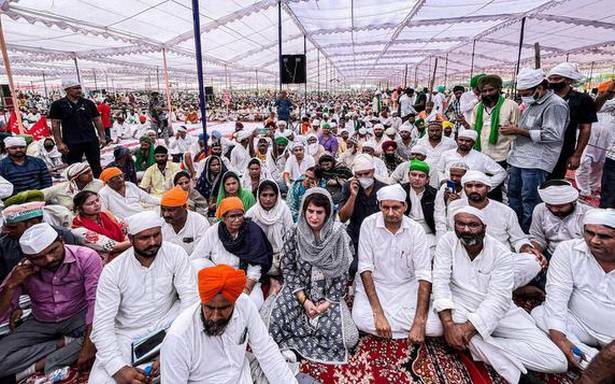 At the final prayers for the four farmers and one journalist killed in Lakhimpur Kheri’s Tikonia, where hundreds of farmers and politicians converged on Tuesday, BKU spokesperson Rakesh Tikait demanded the arrest of Union Minister of State for Home Ajay Kumar Mishra. The Minister’s son Ashish Mishra was sent to three-day police custody on Monday for the murder charge against him.

Congress general secretary Priyanka Gandhi Vadra and Rashtriya Lok Dal president Jayant Chaudhary reached Tikonia and offered their respects at the ‘antim ardas’ ceremony of the five who were among the eight killed in the violent incident involving the convoy of Mr. Ajay Mishra.

Lakhimpur Kheri violence | Farmers to hold a series of protests

Mr. Tikait, who had on October 4 mediated between the protesting farmers and the Uttar Pradesh Government leading to the easing of tensions, on Tuesday said the andolan would go on till Mr. Ajay Mishra resigns, and demanded that he be arrested on charges of criminal conspiracy and sent to Agra jail along with his son to minimise chances of their influencing the case. The farmers and the Opposition parties have also been demanding his dismissal.