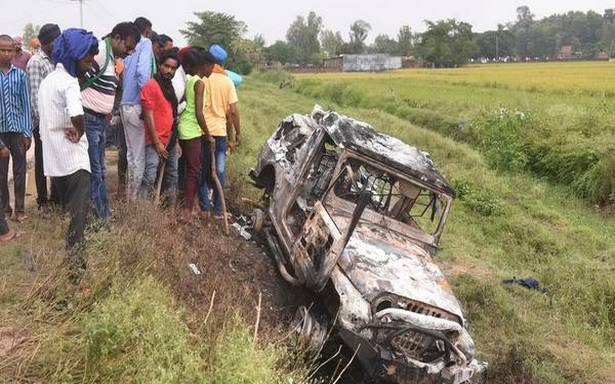 Union Minister of State for Home Affairs Ajay Kumar Mishra, whose cavalcade allegedly mowed down protesting farmers in Lakhimpur Kheri, must be sacked immediately since there could be no impartial inquiry if he remained in the post, CPI (M) Polit Bureau demanded on Tuesday.

He, the party said, was directly responsible for the incident. “It was he, a Minister in a most sensitive Ministry mandated to protect law and order, who violated all norms by making a most provocative speech on September 25 threatening and inciting violence against farmers protesting against the farm laws,” the Polit Bureau said in a statement here.

Mr. Ajay Mishra’s son Ashish Mishra was allegedly at the driving seat of the vehicle that ran over the farmers but the Union Minister has denied the involvement of his son in the incident.

“There is clear video evidence of the convoy, with sirens blaring, driving into the farmers and killing them. The Minister has gone so far as to accuse those injured and killed as being “outsiders” and claimed the involvement of “Khalistani” elements to defend himself and his relatives,” the CPI(M) said.

The party also sharply criticised the Uttar Pradesh government for preventing Opposition members from reaching the site of violence calling it a “lockdown of democracy” imposed by Chief Minister Yogi Adityanath.

All the Opposition leaders, CPI(M) said, must be released and allowed to visit the site of violence.