Lakhimpur Kheri violence | Farmers to hold a series of protests 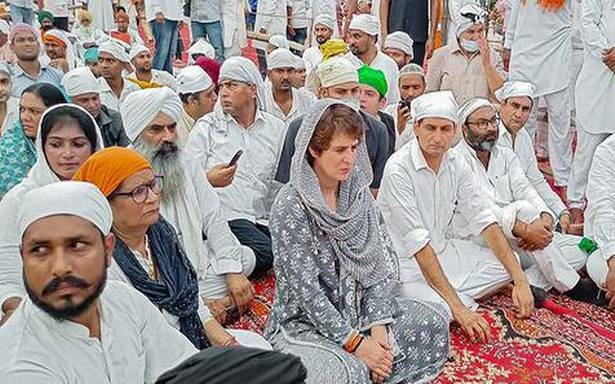 The Samyukt Kisan Morcha (SKM), a coalition of farmers’ unions, has planned a series of protests demanding action in the Lakhimpur Kheri violence.

Spokesperson of the Bharatiya Kisan Union (BKU), which is a part of the SKM, said that a rail roko has been planned for six hours on October 18.

On October 15, the farmers would hold an effigy burning event and a big ‘panchayat’ would be held in Lucknow on October 26, Mr. Tikait said. The ashes of the farmers who were killed in Lakhimpur Kheri would be taken through other districts in urns and immersed in a river on October 24.

She tweeted that the struggle would go on till the farmers and Kashyap “get justice”.

Ashish Mishra, accused of mowing down the farmers with his SUV, was arrested late on Saturday after long hours of interrogation and on Monday he was sent to three days in police remand. Mr. Tikait questioned the treatment given to him by the police, calling it a “red carpet arrest” and compared the remand to handing over a “bouquet” to him.

“Can any officer dare question the son of the Minister of State for Home Affairs? His lawyer would also remain inside with him during the questioning,” Mr. Tikait said, referring to one of the conditions on which a Chief Judicial Magistrate granted police custody of Mr. Ashish Mishra alias Monu.

Mr. Tikait was also questioned by several quarters for compromising “too soon” after the Government had ceded to some of the farmers’ demands, including filing a murder case against Mr. Ashish Mishra. Many of the farmers who had arrived in Tikonia on October 4 were prepared for a long-drawn protest but had made their way back. From the dias on Tuesday, he tried to respond, stating the decision was collectively and consensually taken by the farmer leaders.