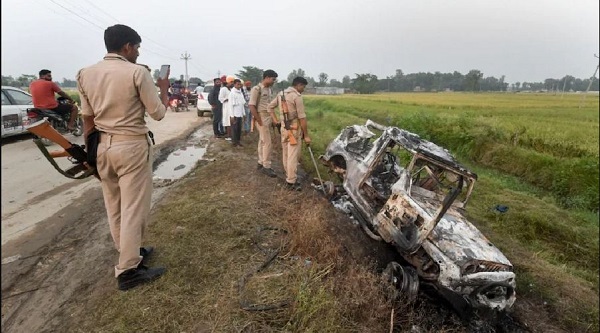 "Two people are being questioned. They have confirmed role of three others who are dead. Technically, they have also been accounted for. These people are giving a lot of information. We are sending summon to the main accused (Ashish Mishra) for questioning," Lucknow IG Lakshimi Singh told media persons today. Ashish Mishra Teni is the son of Union Minister of State for Home Ajay Mishra Teni. Samyukta Kisan Morcha (SKM) has alleged that son of Ajay Mishra Teni was involved in the violence. However, both the Union Minister of State and his son have refuted SKM's allegations.

Meanwhile, police have recovered empty bullet shells at the violence site, sources in the Uttar Pradesh government told ANI. "Incidents of firing or any firearm injuries have not been confirmed," said Lucknow range IG.

She added, "Therefore, we will have to proceed with other evidence that have been given to us." A single-member Commission of Enquiry, headed by retired High Court Judge Pradeep Kumar Srivastava, with headquarters at Lakhimpur Kheri was constituted to investigate the death of 8 persons in Lakhimpur Kheri incident. The commission has been given two months to complete the investigation.

The Supreme Court after taking suo moto cognizance of the case directed on Thursday directed the Uttar Pradesh government to file a status report on who are the accused against whom FIR has been filed in the Lakhimpur Kheri violence and how many of them have been arrested. A Bench of Chief Justice of India NV Ramana and Justices Surya Kant and Hima Kohli also sought a report from the state government on the status of the case registered in connection with the incident and the PILs in the matter before Allahabad High Court.

A total of eight people including four farmers died in the violence that took place in Lakhimpur Kheri on October 3. (ANI)