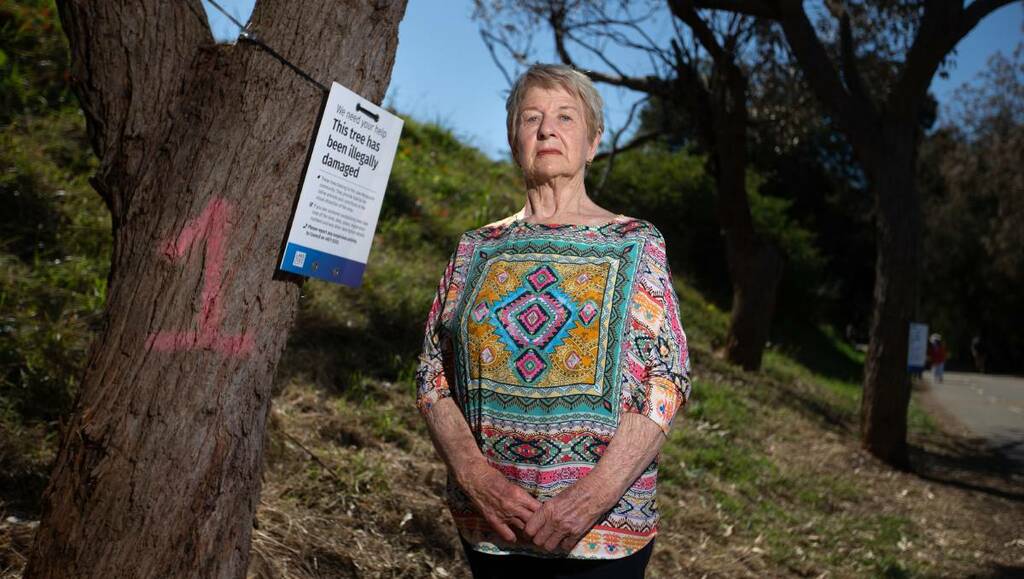 FROM her home of more than half a century along The Esplanade at Speers Point, Wendy Harrison has an expansive view of Lake Macquarie.

What helps make that view so enticing to Wendy Harrison is that it is framed and filtered by trees on public land along the waterfront.

Seven trees along the popular shared pathway between Warners Bay and Speers Point have been dying.

The trees had been drilled into and poisoned by "enviro vandals", to use the council's description.

The trees are just opposite Cr Harrison's house, and she reported their deteriorating condition to the council about a month ago.

For the trees to be dying before her eyes has not only diminished her view, she has found the scene distressing.

"I still can't understand why people have had to extend their view, if that's what it's done for, for such a long way."

For the stream of cyclists and pedestrians using the pathway each day, along with the thousands of motorists driving past on The Esplanade, the sight of dead and dying trees has prompted sadness and anger.

John Lloyd, of Valentine, regularly walks along the path with his wife, Jenny. A self-described "bit of a greenie", Mr Lloyd stopped to inspect the trees' trunks and quickly found the drill holes.

He noted the holes were on the opposite side to the path, "so people wouldn't notice, walking past, until the trees were dead".

"I get so annoyed," he said. "This is such a selfish act just to suit an individual."

It is a sentiment Lake Macquarie City Council's Manager Environmental Systems, Karen Partington, has been hearing and reading regularly in the past few weeks.

While the illegal killing and removal of vegetation in public areas was not a new problem, Mrs Partington said this incident in such a prominent location could well be a watershed moment for the lake.

"I think there has been a shifting of the tide, that the overwhelming response from the community has been, 'This is a disgusting act, and it shouldn't be tolerated'," said Mrs Partington, herself "heartbroken" by the trees dying.

"Having such a prominent row of trees, and a lot of people walking past, watching such a beautiful old tree slowly perish, it really does impact on people at an emotional level."

Karen Partington said while the frequency of vegetation being illegally destroyed had not changed markedly, the ease with which to do it had.

"Over time, the ability to cause significant destruction through more covert means has risen quite dramatically," she said.

"Because people have access to things like cordless and portable drills and are able to access harmful poisons a little more easily than previously, there's more devastating effects on the native wildlife and our biodiversity."

The issue of illegal tree removal on council land flows around the lake.

Along the eastern shore, in the reserve neighbouring the Swansea Commercial Fishermen's Co-operative building, the council's Natural Assets Coordinator, Graham Prichard, inspected a row of lomandra, or native mat rush, that had been planted to stabilise the lake's edge and act as a filter. The lomandra had been recently cut.

"They only grow to about a metre high, but even that seems to be too much, it seems to be unbearable, for some people," said Mr Prichard.

Along this stretch, vegetation removal had been a major problem for years, Mr Prichard said.

"There were trees everywhere and now they're nearly all gone," he said.

Mr Prichard looked at the remains of mangroves on the reserve's shore: "Based on what we can see, they've been cut off at the base and then they've been drilled and presumably poisoned to stop them regrowing."

He pointed to a small island just off the shore and said many trees on it had been cut down and burnt.

"People need to understand the value of trees."

A resident, Phil Neat, approached and referred to the stumps of coral trees along the shoreline. He explained they weren't illegally removed but storm-damaged a couple of years ago and were taken down by council workers.

"We'd love the tree back the way it was, because the view through the tree was really good," said Mr Neat.

Graham Prichard explained other trees in the reserve had been removed illegally.

"I don't know anyone around here who would do it," Mr Neat said. "I can tell you definitely not myself."

Investigations into who poisoned the trees near The Esplanade are ongoing, and the council has done a letterbox drop in the area, urging residents to pass on any information.

The council has also attached signs to the trees, explaining they have been "illegally damaged" and appealing for public help.

While this incident remains unsolved, and with strong feelings coursing through the community, Wendy Harrison is feeling doubly distressed - by the dead and dying trees, and by the insinuations and accusations directed towards those who live near the site.

As Cr Harrison was showing the Herald the affected trees, a man cycling past muttered, "Rich bastards!".

"It's unpleasant when you know people are saying those sort of things," said Cr Harrison, adding that she didn't fit that cyclist's description, nor did she have any idea who poisoned the trees.

"You can't really say who's done it."

And that is part of the problem.

While the council can issue on-the-spot fines of $3000, and court action can result in penalties of up to $110,000, catching a perpetrator, and having the evidence to lead to a prosecution, is another matter.

Since 2010 there have been just 29 infringement notices issued for illegally removing a tree on public land. In the past 12 months, the council has received 16 requests from the community regarding the illegal removal or poisoning of trees on public land. Subsequent investigations have led to two infringement notices being issued. Karen Partington acknowledged the small number of prosecutions could give the impression that those responsible "sort of get away with it, and it's disturbing". But the council is looking at "ramping up the consequences".

The council is holding a review into its policy for the managing of trees along roads and in public reserves. Mrs Partington said the review would consider broader options to tackle the illegal removal of trees, including heavier penalties and greater use of technology, such as sensors and cameras.

In Sydney, a number of councils have responded to illegal tree removal by erecting large banners in the view corridor. To drive the message home, North Sydney Council's banners declared, "WARNING. Trees in this area have been wilfully destroyed by selfish vandals".

Karen Partington said a banner could be a "statement piece" in some instances, but she didn't see that as a long-term solution. Her council colleague, Graham Prichard, believed the limited resources could be better used.

At The Esplanade site, John Lloyd saw some merit in a banner.

"There's thousands of people going past here every day, and it might give the people who did this a bit of guilt," he said.

"And I'd plant trees here as soon as you can. Then the people who have poisoned them will know they're going to get more trees coming up."

Back at Swansea, Phil Neat and another resident, Stuart Smyth, said one deterrent to illegal tree removal there would be for the council to better maintain the reserve.

"More people would then use it, and there would be less opportunity [for vandalism]," Mr Smyth said.

One view that has become clear after this latest high-profile incident, according to Karen Partington, is that trees are treasured around the lake.

"We love our trees in Lake Macquarie," Mrs Partington said. "And we're not going to stop fighting for them."