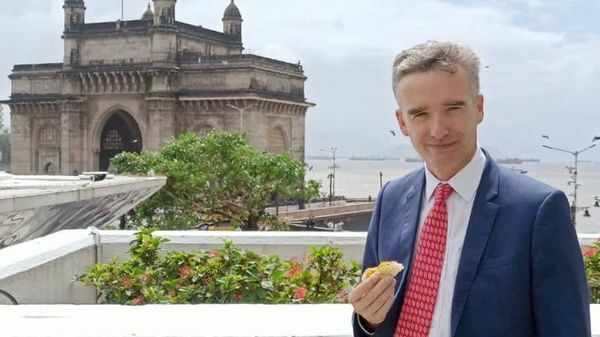 British High Commissioner Alex Ellis has become an internet sensation in the country for trying desi food and flavour since his deputation to India.

Ellis, whose picture with masala dosa went viral, was seen feasting on Maharashtrian vada pav in front of the iconic Gateway of India.

Ellis captioned the photo, " There's always time to have a vada pav in Mumbai". and in true Maharashtrian style, Ellis called the delectable street food, "Lai bhaari", which means excellent.

In a video, Ellis said, " You must have a vada pav while you are in Mumbai...Vada Pav, delicious," he added.

The post has got more than 21,200 likes and several interesting comments.

There's always time to have a #vadapav in Mumbai - लई भारी! pic.twitter.com/Xv6Hu4iW2X

Calling it a ‘wonderful’ city, Ellis has now left Mumbai.  The High Commissioner posted a vlog on Twitter sharing his experience during his visit.

I had a great visit to this wonderful city. Stay safe and wishing all of you a #HappyGaneshChaturthi #GanpatiBappaMorya ! pic.twitter.com/sk8vecC3R1

The diplomat discussed education, investments, and the flow of students between Britain and India. The British High Commissioner said he held a discussion with CM Thackeray and his son Aaditya Thackeray on how the UK and Maharashtra can further work on trade, healthcare, climate change, and other areas.

Delighted to meet with @CMOMaharashtra Shri Uddhav Thackeray and @AUThackeray to discuss ways in which the UK and Maharashtra can further work on trade, healthcare, climate change, and other areas.