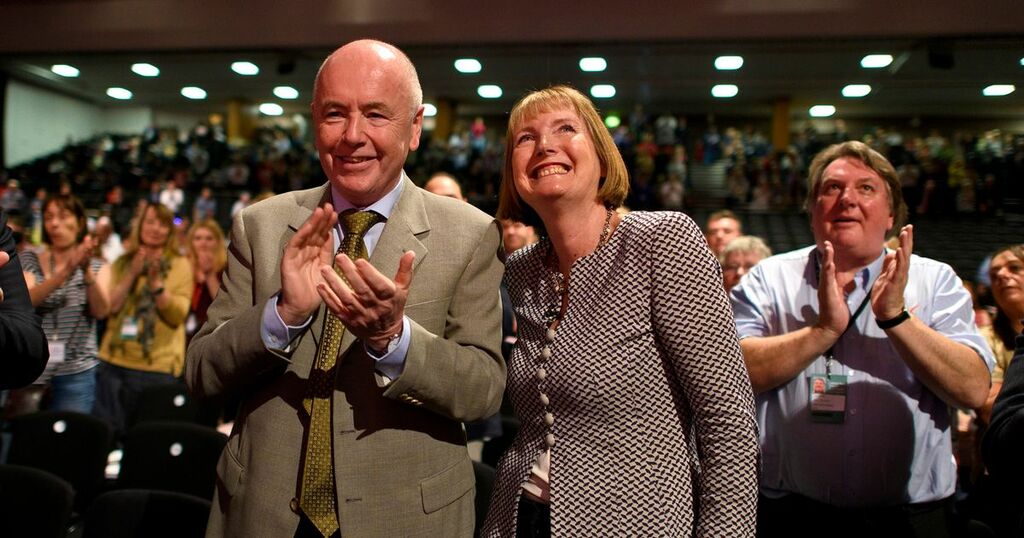 Labour shadow minister Jack Dromey died suddenly in his flat in Birmingham on Friday morning, his family has said.

Mr Dromey, 73, who was married to party grandee Harriet Harman for nearly 40 years, is understood to have died from natural causes.

Tributes poured in from across the political divide to the father-of-three, who spoke only yesterday in the Commons in a debate on resettlement of Afghan refugees.

Flags were lowered to half mast in Parliament's New Palace Yard on Friday night as a mark of respect.

In a statement, his family said: "Jack Dromey MP died suddenly this morning aged 73 in his flat in Erdington.

"He had been a dedicated Member of Parliament for Birmingham Erdington since 2010.

"He was a much loved husband, father and grandfather, and he will be greatly missed."

His son Joe tweeted: "Our dad - Jack - died suddenly today. We loved him so, so much. Rest in peace big man x."

Born in London in 1948, Mr Dromey was active in the trade union movement and acted as deputy general secretary of the Transport and General Workers’ Union from 2003.

He continued in the role when it merged with Amicus in 2007.

In 2010 he was elected to represent Birmingham Erdington and held shadow frontbench roles under Ed Miliband, Jeremy Corbyn and Keir Starmer.

Mr Dromey was made shadow immigration minister by Keir Starmer only last month.

He married Harriet Harman in 1982 after the couple met on a picket line.

Ms Harman, who is currently Mother of the House as the longest serving female MP, announced only last month that she would be standing down at the next election.

It was understood the couple were looking forward to spending more time with their three children.

Keir Starmer led tributes from across politics to a man who "dedicated his life to standing up for working people".

The Labour leader said: "The proud son of Irish parents, Jack Dromey dedicated his life to standing up for working people through the Labour movement, becoming Deputy General Secretary of the UK’s largest trade union and then a Labour MP.

“From supporting the strike at the Grunwick film processing laboratory, when he met Harriet, through to being elected to represent Birmingham Erdington in 2010, Jack lived his commitment to social justice every day.

“Jack was recognised for his determination to stand up for his constituents and he was highly respected and warmly regarded across Parliament.

“My thoughts and those of the whole Labour movement are with Harriet, their children and all those who knew and loved Jack.”

Deputy Labour leader Angela Rayner said: "Jack Dromey was a great mentor and supporter to me but above all a friend for many years.

"This is absolutely tragic news for his family, his constituents and the party. I am thinking of Harriet and the rest of his family. He will be greatly missed."

Former PM Sir Tony Blair described him as "hugely likeable" and a "complete stalwart of the Labour and trade union movement".

He said: "I am absolutely shocked and greatly saddened by the news about Jack. I have known him for almost 40 years.

"He was a complete stalwart of the Labour and trade union movement, who dedicated his life to the service of others whether in his work for his trade union or in later years as a Member of Parliament.

"He was also hugely likeable, a very popular colleague and well respected by all who worked with him. Cherie joins me in sending profound condolences to Harriet and all the family."

"I first met Jack on the picket lines of the Grunwick strike in the 1970s," he said.

"Jack was a dedicated trade unionist, a firm socialist & an incredibly hard working MP. I send my condolences to Harriet & all his family & friends."

The Prime Minister tweeted: "Deeply saddened to hear of the death of Jack Dromey MP.

"My thoughts are with Harriet and the family, and all those who knew him as a friend. May he rest in peace."

Commons Speaker Sir Lindsay Hoyle paid tribute to a "great guy" who was always looking to support workers - and a "devoted husband, father and grandfather".

He said: 'We are all in disbelief that the life-force that was Jack Dromey has died – this is another sad day for the House and a bad start to the year.

"I have known Jack since the mid-1980s when we fought to save the Royal Ordnance Factory in Chorley - he was national officer for the Transport and General Workers’ Union, and I was chair of economic development at Chorley Council.

"He was a great guy, down to earth, always positive and always looking to support and save jobs.

"At his heart he was a devoted husband, father and grandfather - so all our thoughts go to Harriet and the rest of the family at this very sad time."

Education Secretary Nadhim Zahawi said he was "shocked and heartbroken" by the news.

He said: "Shocked and heart broken by the news of the sudden death of Jack Dromey MP.

"He was a friend, thoughts and prayers with Harriet Harman and the family."

Science Minister George Freeman tweeted: "Terrible news of the sudden death of Jack Dromey MP - one of those MPs who embodied the best of the Commons: unerringly polite, kind, generous & collegiate whilst always true to his principles & constituents.