Anthony Albanese has flagged a new national strategy to minimise Covid-related deaths if he wins Saturday’s election, and says looming opposition election costings will book a $750m saving from paring back grants programs.

The Labor leader’s signal of a public health reboot during an appearance at the National Press Club on Wednesday followed Scott Morrison declaring earlier in the day the country needed to move on from the pandemic despite Australia recording 5,633 deaths this year and battling the highest Covid transmission rates per capita in the world.

The latest batch of opinion polls point to a tightening of the political contest in the final week.

Morrison hit the hustings in Victoria before ending the day in the marginal Tasmanian seat of Braddon, while Albanese fronted the National Press Club in Canberra.

Asked what he would do to reduce the number of Covid deaths if he won the election on Saturday, the Labor leader said there was a need to “step up the national strategy”.

He said he had requested officials provide a comprehensive briefing on a national plan next week in the event he was sworn in as prime minister.

Albanese said the pandemic continued to be a “major issue” in the community and he wanted advice about how to refresh the approach, including “how do we get the information out there so people get their booster shots – what can we do to minimise the impact of Covid, which is continuing to have an ongoing impact on people?”

Earlier in the day, the prime minister told journalists: “We are living with Covid, and not going back to those daily press conferences of people talking about Covid every day, and putting the threat of shutdowns and lockdowns and interfering in people’s lives again.”

During a speech in Melbourne later in the day Morrison said the pandemic had revealed a lot about the power of government to Australians “and I think we’re over that, and we want to put that in the rear-vision mirror”.

Morrison has been keen to keep the focus on economic management, but faced questions on Wednesday about the latest wage price index figures that showed real wages are falling behind.

Wages rose 2.4% in the past year, and 0.7% in the March quarter, but remained well behind inflation which reached 5.1%.

The prime minister said that wages would continue to rise as unemployment came down, but said it would take longer for wages to keep up with inflation if Labor was elected.

“I’ve been very candid with Australians about the economic challenges that we’re facing and you’re right to highlight the challenges that are there with real wages. Labor has no magic bullet on this,” Morrison said. “They have no magic pen or magic wand.

“I’m saying wages are rising and will rise. The challenge is inflation, and that’s a global challenge.

Albanese has faced pressure on the hustings for leaving the release of Labor’s official campaign costings to the final days of the contest.

The Labor leader said on Wednesday the costings to be released in Canberra on Thursday would include a reduction in uncommitted funding in the Community Development Grants Program by $350m.

He said Labor would also return a $400m regionalisation fund to the budget bottomline. Albanese noted those decisions would repair the budget by “three-quarters of a billion dollars”.

That news sent the deputy prime minister, Barnaby Joyce, on the political attack.

“The regionalisation fund is so that regional communities can pick the industry that takes them ahead, whether that’s tourism, whether that’s manufacturing, to get better paying jobs into regional Australia.”

Labor has been signalling its campaign costings will show a less favourable budget bottomline than the Coalition’s.

But Albanese went on the offensive about the Morrison government’s plan to imposed a higher efficiency dividend across the public sector to deliver $3.3bn in savings to fund the Coalition’s election promises.

A fired-up Labor leader declared: “You know what that leads to – robodebt”.

“It doesn’t save money. It costs money, because you take humans out of human services, and it has devastating consequences for real people. It costs lives. Lives! As well as over $1bn to taxpayers.” 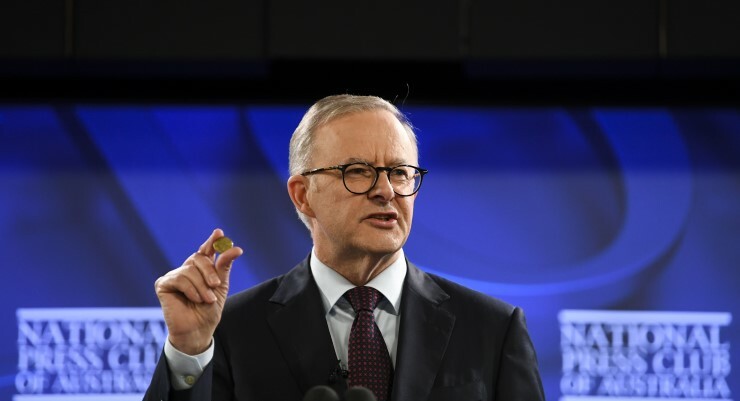