LABOR MP Meryl Swanson has claimed victory in the seat of Paterson after a close race against Liberal candidate Brooke Vitnell.

The incumbent was greeted with a tidal wave of cheers and hugs as she walked into her election party in Maitland on Saturday night in a moon boot - after she stumbled on a kerb and tore a tendon earlier in the campaign.

As she gave her victory speech she said she felt "incredibly grateful".

"All these beautiful people to share this with, we're just doing this because we want our region to prosper and be as great as it can be," she said.

"I want to deliver better healthcare, jobs, aged care, childcare, infrastructure - but mostly I want people to have a sense of belonging and a sense that they have someone who really gives a damn about them and their life, someone who really cares about how they're going and someone who is prepared to go to Canberra and absolutely fight for them and work for them every day."

Swanson began her victory speech by acknowledging the traditional custodians of the land and vowed that an elected Labor government would immediately embrace The Uluru Statement from the Heart.

She lead the polls with 41.09 per cent of first preference votes in Paterson, followed by challenger, Liberal candidate Brooke Vitnell at 35.47 per cent about 9:30pm on Saturday night when the results were in for 43 of 57 polling places across the electorate.

In 2019, Swanson won the seat with 55.04 per cent of the two-party preferred vote - she's predicted to take Paterson with 53.3 per cent at the end of this election count.

Swanson said she still felt the national result was too hard to tell with big swings in a number of seats.

"I think we will see some seats we didn't expect to lose going down and we might win some that we didn't so I think it might be a little unpredictable," she said.

"I think it's going to be quite a lumpy night and we're going to have to just keep watching."

There were a number of tense moments throughout the campaign trail, with Swanson arguing conservatives used "scare tactics" to convince voters Labor would turn their backs on coal mining.

Vitnell was equally unimpressed, arguing the campaign had been "grubby" and that a number of her election signs had been vandalised or taken down. 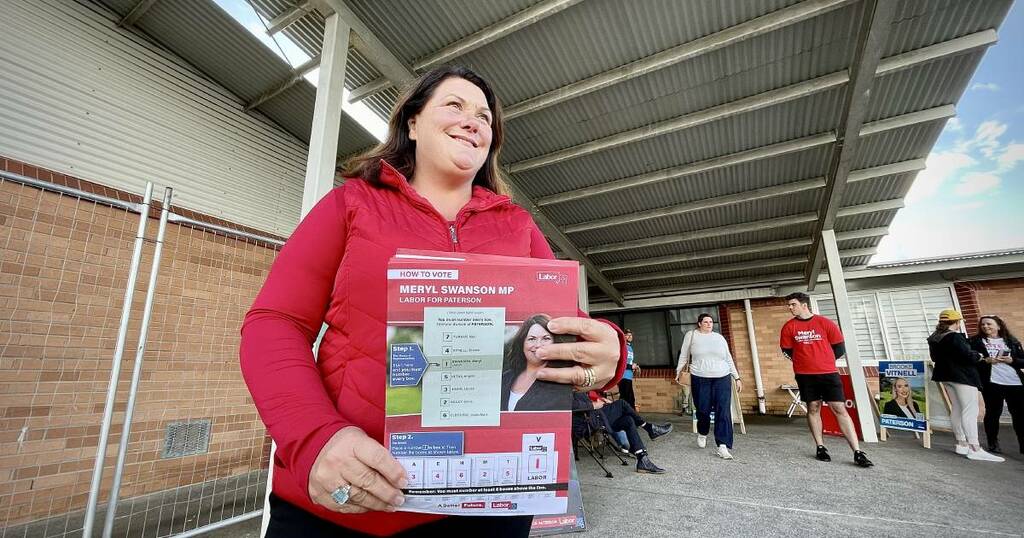