LABOR'S Dan Repacholi has claimed victory in the 2022 federal election.

"We didn't do this as one person, we did this together as a team," Repacholi told Labor faithful gather at Cessnock Leagues Club just before 10pm Saturday night.

"Because Labor is a team and will continue to be a team forever."

As of 10pm Saturday night, the Australian Electoral Comission had Labor leading Nationals in the Hunter 53.4 to 46.6 per cent on a two candidate preferred basis.

Along with his team, Mr Repacholi credited his "amazing family."

"We've gone through Olympics, Commonwealth Games and now an election campaign," he said.

In what he described as an "amazing campaign", Mr Repacholi praised the other Hunter candidates along with the region's voters.

"I'd like to thank you voters for giving me this opportunity to represent you," he said.

"We may not have won tonight, we may not have made history, but if the National Party membership wants it, we can be back here again in three years to try again," Mr Thomson said.

"Tonight, when there's been a 5 per cent swing away from the Coalition, there looks like there'll be a slight swing towards us in Hunter, making the seat an even more marginal one."

He said he had rung Mr Repacholi and congratulated him and said the Hunter needed a strong MP who would represent the interests of the region.

Mr Anderson said it was sobering to see the government fall and a Labor administration in power, but he cautioned that "just 30 per cent" of people had voted for the government.

"That is a profound thing to contemplate," Mr Anderson said.

"We have enough external enemies without fighting the internal ones."

With a less than one per cent ALP swing, the Hunter result was called earlier than most pundits expected.

However, Mr Repacholi did not claim victory immediately and a campaign spokesperson told the Newcastle Herald the results were still too close to call.

"We are thrilled that Antony Green has called the result but it's still very early and we are not resting on our laurels just yet," the spokesperson said.

Earlier scenes up the Valley

At the Miller Park Hotel at East Branxton, a defiant Dale McNamara insisted it was still too early to call the seat of Hunter, and he, like James Thomson, was pointing to pre-poll and postal votes, arguing that they will hold the key to the election in Hunter regardless of what happens this evening.

In contrast to the sedate scenes at Singleton Diggers for the National Party gathering, the atmosphere at Branxton was loud and boisterous.

The AEC and the ABC have both called Hunter for the ALP, and their experience in voting counting and preference analysis has begun to weigh heavily on the National Party room.

At the Caledonian Hotel, Independent candidate Stuart Bonds agreed that Labor looked like forming government, but like the other challengers to Mr Repacholi refused to concede that Labor would retain the seat.

"No way, no way," Mr Bonds said. "It's just too early to tell and there is a huge load of vote yet to be counted."

He said that on the booths "we've looked at were 60 per cent nationals 40 per cent Labor".

Despite this optimism, the official AEC figures indicate a clear win to the former Olympian and Commonwealth Games shooter, 53.7 per cent to 46.3 per cent, a slight improvement in two party preferred terms over the margin that Joel Fitzgibbon secured in 2019 against Nationals challenger Josh Angus.

Just before 9pm the AEC said those were the "projected figures with 40 of 71 polling places "returned" and "63.16 per cent of the ballot papers counted", with a "two candidate preferred count undertaken", indicating that an indicative flow of preferences had been factored into this estimate of the final outcome.

As shown by the AEC graphic below, Dan Repacholi had 17,736 votes or 36.98 of first preference votes, with James Thomson substantially behind on 11.157 or 25.15 per cent of the vote counted.

The primary votes for the majors are more or less in line with estimates in opinion polls, although Mr Repacholi's vote appears higher than many estimates had him.

A Nationals victory was always going to depend on preference flows and at this stage of the night, despite the optimism of the challengers, this looks unlikely.

Even so, conservative candidate scrutineers in Muswellbrook and Singleton were still insisting that Mr Repacholi could yet fall short.

One of Mr Thomson's scrutineers said the Nationals candidate had won the Denman booth, which he said the party had never won before, and his team is clinging to the belief that the "record number" of postal votes, especially, will help them, given that postals are traditionally reckoned as leaning conservative.

But as one staffer said, "COVID has smashed all of that thinking".

The swing against the government cost treasurer Josh Frydenberg his job.

among those watching the man who many in the Liberal Party believed would succeed Scott Morrison as prime minister give his "final press conference" was former deputy PM John Anderson.

Mr Anderson, who with former state nationals leader George Souris had dropped by to support Mr Thomson, said his party had "done well" in Hunter, given the swing against the government generally.

Politics can be a cruel business, as those who have lost their seats tonight will attest, but the competition of ideas in Australian government - as criticised as it often is - is one of the great features of our democracy.

Held by Labor since 1910, the Hunter has had a federal candidate with the Fitzgibbon family since 1984, first by Eric Fitzgibbon unil 1996 when his son Joel Fitzgibbon took up the mantle - retiring this year.

With Joel covering the election for Sky News on the night, his wife Dianne told the Newcastle Herald from the Cessnock Leagues Club auditorium, it has been an emotional few weeks.

"I have worked on polling booths since Eric first ran for the mayoral position in the local government before he ran federally," Ms Fitzgibbon said.

Confident that husband Joel pulled up stumps at the right time, Ms Fitzgibbon said "there is no better candidate" for Labor than Dan Repacholi.

"He will be strong in voice as he is strong in stature and no one will ever wonder where Dan is when he's down in Canberra," Ms Fitzgibbon said.

"I'm confident that he will speak up because he's not a career politician. He's a worker and he knows what the workers are thinking." 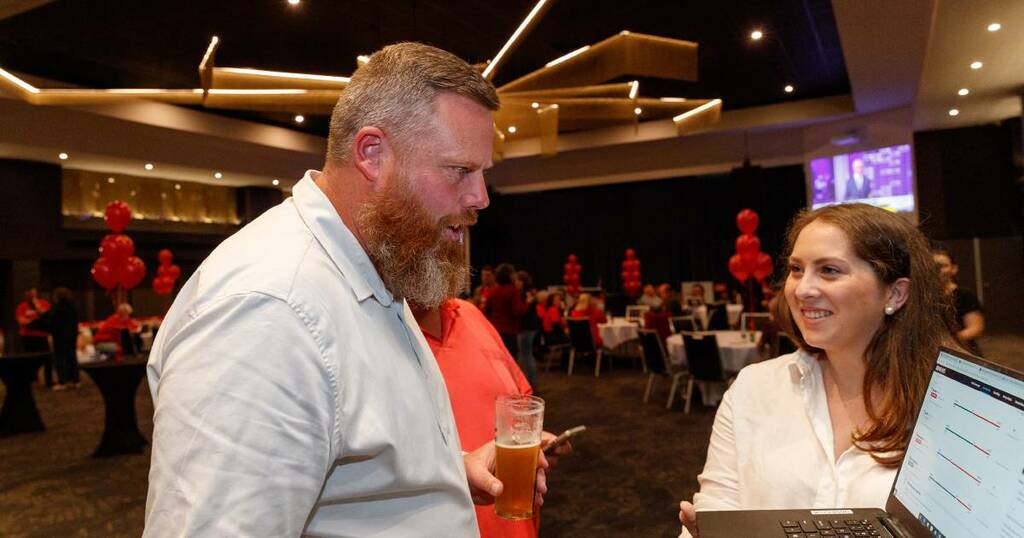