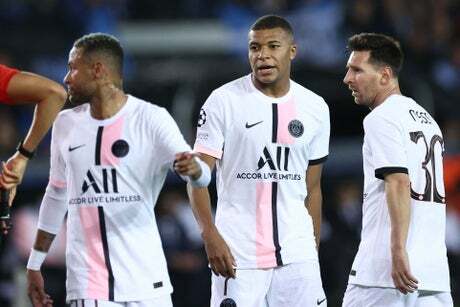 Real Madrid are poised to launch a new move for Kylian Mbappe in the next transfer window after the Spanish club’s president Florentino Perez said today to expect news from the striker in January.

Yesterday, the France international confirmed for the first time that he asked to leave Paris Saint-Germain in July.

Although PSG refused Real’s £171million deadline-day bid for the World Cup winner, Mbappe is now in the last year of his contract.

It means he could sign a pre-contract agreement with Real in January before moving to the Spanish capital as a free agent in the summer.

And in an interview with El Debate today, Perez said: “In January we will have news from Mbappe. We hope that on January 1 everything can be solved.”

The 22-year-old confirmed he pushed for a move in the summer during an interview with RMC Sport.

But in an interview with L’Equipe published today he was coy on his future.

Asked if he was going to leave next summer, Mbappe said: "I’ve been in football long enough now to know that yesterday's truth is not necessarily today's, nor tomorrow's. If I was told that Messi was going to play at PSG, I wouldn't have believed it, so you never know what's going to happen."

Mbappe, Lionel Messi and Neymar form what has been regarded as the most exciting attacking trio in club football, but they have struggled to gel, with Mbappe showing his frustration towards the Brazilian.

Mbappe was heard saying "this bum, he never passes to me" in a Ligue 1 game against Montpellier last month.

"Yes, yes, I said that. Now, these are things that happen all the time in soccer. It's just not something that sticks. That's why, immediately afterwards, seeing how big it had become, I talked to him about it," said Mbappe.

"We've exchanged a lot of words like that in the past and we'll continue to do so, because we want to win, but there shouldn't be any hard feelings. There is no resentment at all because I respect the player and the man and I admire what he is."

"Right now, my future is not my priority," he said. "I've already wasted a lot of energy this summer, and it was tiring."