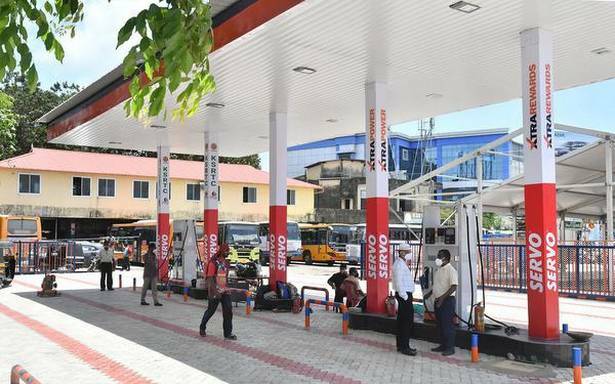 As part of diversifying its services to achieve financial sustainability, the Kerala State Road Transport Corporation (KSRTC) is set to venture into fuel retail.

With an eye on boosting its non-ticket revenue, the public-sector utility will formally launch KSRTC Yatra Fuels on Wednesday to enable the public to access its retail petrol and diesel pumps being set up on its station premises.

Figuring among the government’s 100-day programme, the facility will be inaugurated by Finance Minister K.N. Balagopal at the East Fort bus depot here. Transport Minister Antony Raju will chair the inaugural session while General Education and Labour Minister V. Sivankutty will conduct the first sale at the outlet being established at the station. Civil Supplies Minister G.R. Anil will release the KSRTC Yatra Fuels logo.

Eight of the proposed 75 retail outlets are being currently launched. Besides at the East Fort, such facilities have come up in Kozhikode, Cherthala, Chadayamangalam, Munnar, Muvattupuzha, Chalakudy, and Kilimanoor.

It is being undertaken in association with public-sector oil firms. While sales will be restricted to petrol and diesel initially, the fuel stations will soon include ‘clean fuels’ such as liquefied natural gas (LNG) and compressed natural gas (CNG), the ‘Chhotu’ 5 kg LPG cylinders, as well as electric charging stations, according to a KSRTC release.