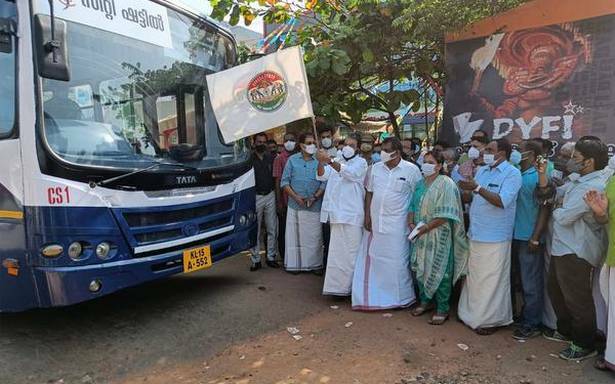 Kerala State Road Transport Corporation (KSRTC) went a step ahead towards ensuring last-mile connectivity as it launched its city shuttle services in the State capital on Thursday.

The State-run transport utility launched six to-and-fro services to Pallichal, Nemom and Pravachambalam, which will shuttle along the route from 7 a.m. to 7 p.m. on all days. The buses will pass each stop in the direction in intervals ranging from 15 to 30 minutes.

A majority of the city services would transition into green fuels within six months. Fifty electric buses would soon be rolled out in Thiruvananthapuram. Besides, half of the 300 CNG buses that were being procured by the KSRTC would be allotted to the city, Mr. Raju said.

The city circular services that plied along seven routes clockwise and anti-clockwise had been witnessing an increasing patronage, he said. Nearly 17,000 passengers currently depended on the services. The success had prompted the KSRTC to extend the introductory offer of ₹10-Good Day tickets that allowed travel throughout the day until March 31.

Using the Today ticket, launched on Thursday, passengers could travel unlimited on shuttle and circular services for 12 hours. Monthly cards that would provide considerable discount for frequent travellers would be launched, the Transport Minister said.

Flagging off the shuttle service, General Education Minister V. Sivankutty said plans were on to launch shuttle services connecting schools. The proposal would be considered after the Omicron-induced restrictions were lifted.