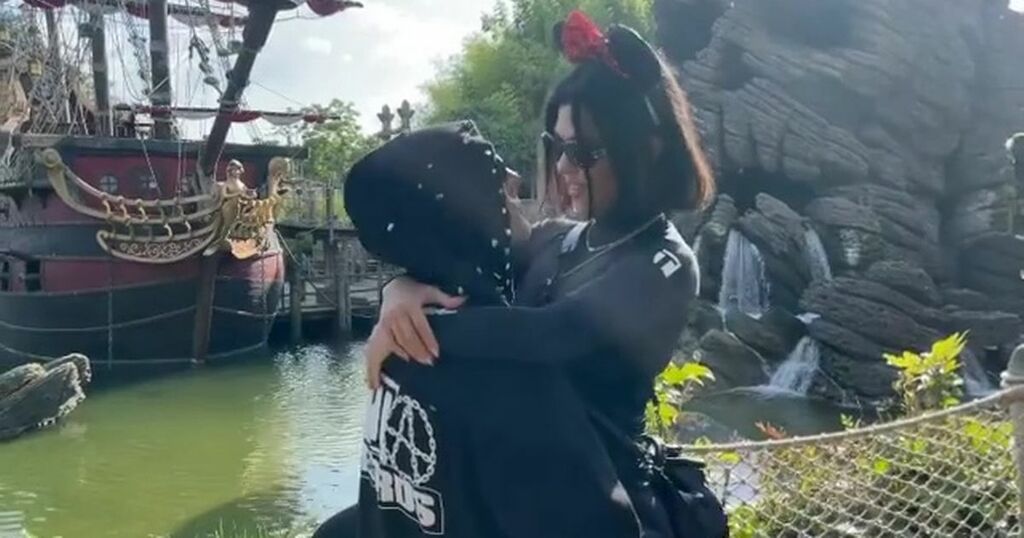 The pair were savaged by Kourtney's sister Kim Kardashian in a skit for the popular show for their constant displays of affection.

Blink-182 drummer Travis, 45, shared a video of the pair embraced during a trip to Disneyland Paris.

The POOSH founder, 42, is seen with her legs wrapped around her beau as she passionately gazes into his eyes as they sway side to side. They then lock lips in front of a pirate ship.

Kourtney is rocking an all-black attire with cute Minnie Mouse ears, while Travis donned an edgy black hoodie with the hood pulled up.

Travis titled the post: " I want your skull," with Kourtney quickly responding in the comments section with "I need your skull".

In her SNL appearance, Kim pulled no punches as she mocked the hands-on couple for their PDA-packed romance.

Kim played the role of her sister, while the drummer was portrayed by Mikey Day and the pair jokingly got affectionate while court was in session on "The People's Kourt".

The duo repeatedly called each other "baby" while Kourtney sat on Travis’s lap and told him: "Travis, baby, I have to do my show!"

After the show, Kourtney seemingly approved of the comical sketch and wrote: "You killed SNL. Finally watching! Proud sister!"

And it was seemingly well received by the audience too after the show seen a 23% rise in viewers for the episode after suffering its worst-watched season opener in its history the week before.

Originally, the announcement of Kim hosting the show was met with mixed reviews with Will & Grace star Debra Messing among those unsure as to why she had been picked.

The 53-year-old actress took to Twitter following the announcement to ask if she was "missing something".

She said: "Why Kim Kardashian? I mean, I know she is a cultural icon, but SNL has hosts, generally, who are performers who are there to promote a film, TV show, or album launch."

But a host of other comical lines and savage takedowns seemingly won over the watching public. As well as dissing her sister's relationship, Kim took aim at other high-profile moments, including her own sex tape and the OJ Simpson case.