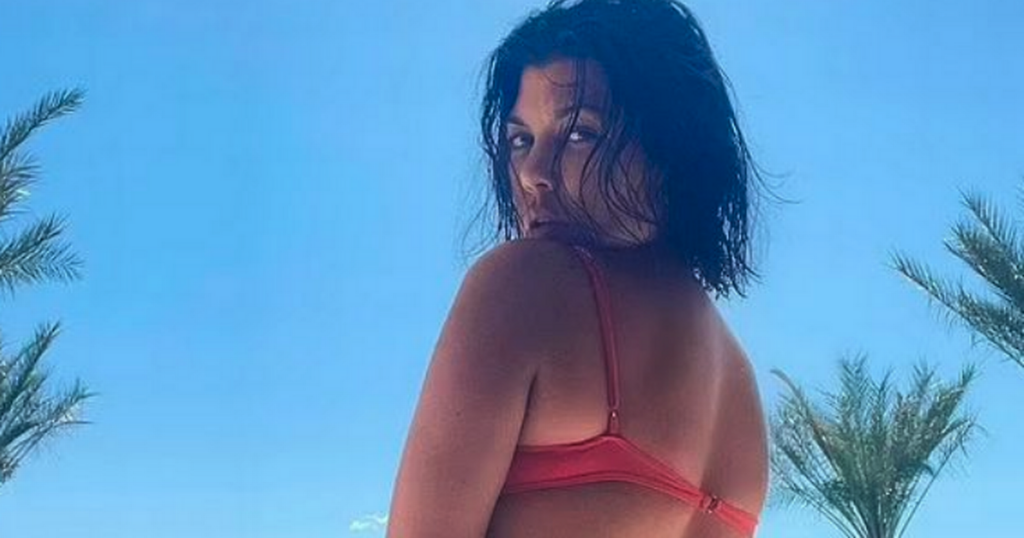 Kourtney Kardashian has sparked a mystery after deleting a body positive Instagram post after seemingly having second thoughts about sharing filter-free bikini snaps.

The 42-year-old reality star left fans baffled after she shared, but then took down, stunning snaps of herself enjoying the summer sunshine at her mother’s home in Palm Springs.

In one image, mum-of-three Kourt posed in a cut-out red swimsuit with her hands running through her wet hair and gazing down towards the camera.

While a second image showed her coquettishly looking over her shoulder as she posed with her back – and famously full bottom – to the camera.

The images appeared to show Kourtney posing under the natural sunshine while shadows also fell across her body.

While her seemingly fresh-from-the-pool appearance had her looking make-up free and refreshed.

The images stayed on Instagram for a brief time – clocking up over 1.2 million likes and a string of growing complements from fans who praised the rarity of seeing a Kardashian without the help of a filter.

Many of Kourtney’s admirers noted the un-retouched appearance of the photos, with one writing: “You're my favorite because you are REAL. I don't see any of the other family members posting such raw photos".

Another fan declared: "Looking good and healthy, your a good role model! Loving it" followed by a heart eye emoji.

And another questioned: "Is that first realist pic of whole kardashians family" – also followed by a red heart emoji.

But despite the glowing feedback, Kourtney mysteriously deleted the images soon after they had been praised.

Kourtney and her Keeping Up With The Kardashians are no strangers to using filters and adding photo-shop tweaks to the images they share online.

The star and sisters Kim, Khloe, Kylie and Kendall have been routinely savaged by fans over past ‘photo-shop fails’.

While the reality star family have also been hammered for the ‘damaging’ impact they have had on young, impressionable followers.

Earlier this year, 37-year-old Khloe divided opinions when she battled to have an unfiltered image of herself erased from social media after it went viral.

Hitting out over the image being circulated, she wrote: “The photo that was posted this week is beautiful. But as someone who has struggled with body image her whole life, when someone takes a photo of you that isn’t flattering in bad lighting or doesn’t capture your body the way it is after working so hard to get it to this point – and then shares it to the world – you should have every right to ask for it to not be shared – regardless of who you are.”

She continued: “For over a decade now in photos, every single flaw and imperfection has been micro-analyzed and made fun of to the smallest detail and I am reminded of them every day by the world.”

And she added: “we cannot continue to live life trying to fit into the perfect mould of what others have set for us.”

But some fans hit out at the star – as many slammed the Kardashians for creating unrealistic beauty standards.

One angry fan wrote on Twitter : “ Khloe Kardashian getting annoyed at the beauty standards of filters vs hating a photo of her actual body even tho her & her family are the pioneers for editing their pics to almost CGI level.”