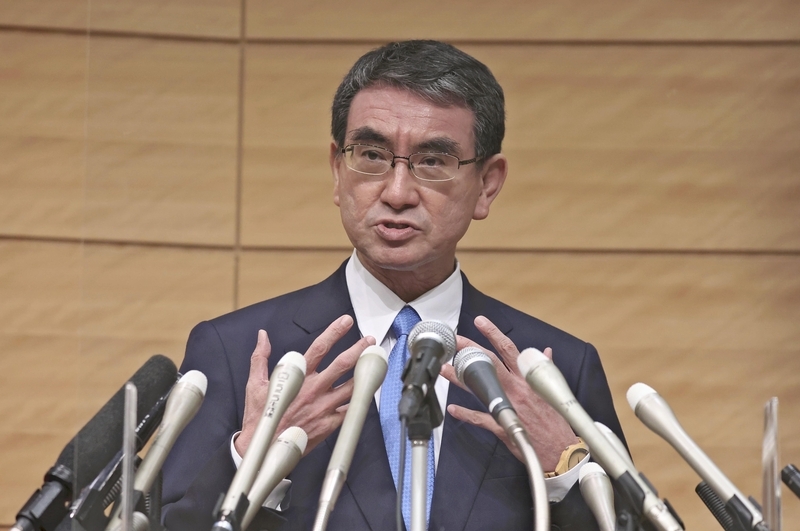 Taro Kono, minister in charge of administrative and regulatory reform, declared his candidacy for the Liberal Democratic Party's presidency on Friday.

In doing so, Kono became the third person to formally announce a bid for the LDP presidency, following Fumio Kishida, a former chairperson of the LDP Policy Research Council, and Sanae Takaichi, a former internal affairs and communications minister. The presidential election is scheduled to be held on Sept. 29 with official campaigning to kick off on Sept. 17.

"I believe I must overcome this ongoing crisis together with the people by becoming aware of their feelings and concerns, sharing information with them and sending out clear messages," Kono said at a press conference in Tokyo on the same day. "I want to create a society with warmth where people support each other through politics that win the understanding of the people."

"Equal opportunities are offered and people who make efforts are rewarded. No one is left behind and people receive support thoroughly. I want to create such a nation," he added.

On Thursday, Kono met with Deputy Prime Minister and Finance Minister Taro Aso to inform Aso of his intention to announce his candidacy, as he is a member of the LDP faction that Aso leads.

Aso encouraged Kono, saying: "If you're running for [the party presidency], you should win. Good luck."

As some members of the faction, especially senior ones, are cautious about Kono's bid for the party presidency, Kono has met repeatedly with faction leaders and relevant others. This will be his second bid for the LDP leadership since he ran in the 2009 election.

Meanwhile, Kishida met with Aso and Hiroshi Moriyama, chairperson of the LDP Diet Affairs Committee, on Thursday to seek their support. Takaichi discussed plans for the election with people such as conservative members of the party faction led by Hiroyuki Hosoda.

LDP factions other than the one led by Kishida have taken a wait-and-see stance as they have been unable to choose a specific candidate to support. The factions headed by Hosoda, Toshihiro Nikai, Wataru Takeshita and Nobuteru Ishihara each held a meeting Thursday, but they failed to reach a conclusion on the matter.

The Hosoda faction, the LDP's largest with 96 members, finds itself in a situation where its support could be divided among several candidates. The faction has been unable to determine its stance in part because it wants to become a "mainstream faction" by supporting the winner of the upcoming presidential election and obtaining four key party posts, including secretary general.

Former Prime Minister Shinzo Abe, who has influence on the Hosoda faction, supports Takaichi, who does not belong to any faction. House of Representatives member Shuichi Takatori asked party members to throw their support behind Takaichi, saying: "We can't let Mr. Abe be humiliated. I want many of my fellow members to support her." Several other faction members echoed similar views.

In the Hosoda faction, there are also supporters of Kishida while some others back Kono. At the faction's general meeting on Thursday, about 20 members made remarks. While some urged their fellow members to vote independently, lower house member Ichiro Kanke insisted that the faction take unified action and aim to become a mainstream faction.

At the end of the meeting, Hosoda, the faction leader and a former chief cabinet secretary, said: "There are many different opinions. We will consolidate them well."

The faction plans to hold another general meeting next week.

After the faction meeting Thursday, however, Takatori and others began making their own moves by hastily meeting with Takaichi.