Newcastle coach Adam O'Brien was left ruing a controversial obstruction call but refused to use it as an excuse for his side being blitzed 36-12 by Brisbane on Thursday night.

The Knights were overrun in the second half at McDonald Jones Stadium by a Broncos outfit missing star halfback Adam Reynolds.

Brisbane made the most of their opportunities to claim a fifth consecutive victory while the Knights dropped to their eighth defeat in nine games.

Newcastle came out firing and had plenty of energy in the opening 40 minutes, but made a poor start after the break and let visitors back into the contest.

An easy try to Jordan Riki eight minutes into the second stanza allowed the Broncos to take a 12-6 lead and they moved eight points clear following a penalty goal soon after.

But Kalyn Ponga managed to spark a mostly quiet crowd of more than 13,000 to voice when he made a break from 40 metres out to score Newcastle's second in the 61st minute.

Then with 11 minutes left to play and the Knights trailing 14-12, Brisbane winger Selwyn Cobbo finished off a long-range effort, but replays showed Knights half Adam Clune had been obstructed in the lead-up play.

Broncos fullback Te Maire Martin appeared to have run behind Jordan Riki before passing the ball with Clune unable to make a tackle.

But the Bunker deemed Martin had passed the ball before running behind his teammate.

The decision ultimately allowed Brisbane to get the upper hand and they went on to score a further three tries.

O'Brien was baffled by the call.

"If it happens on the 10-metre line or on the try-line, the rule should be the same all the way down the field in my opinion ... I don't get it, I don't understand it," he said.

But the coach refused to use the controversial decision as an excuse, instead lamenting his side's late collapse.

"That scoreline at the end there, it's inexcusable," he said.

"I get that took a bit of wind out of the sails there ... but there's stuff we need to be better at."

Newcastle lost centre Bradman Best to a dislocated elbow in the second half, but it was no excuse for their performance.

The home side had looked the better side in the first half with more attacking opportunities, but they struggled to make use of a string of penalties. Seven errors in the half didn't help.

They scored first in the ninth minute through back-rower Tyson Frizell, who picked up an Adam Clune grubber and crossed from a few metres out.

Brisbane hit back in the 26th minute when hooker Billy Walters latched onto a loose pass inside 10 metres and bumped his way past a few defenders to score on the left edge.

A well-placed Anthony Milford grubber looked to have set-up Dane Gagai for Newcastle's second, but the centre was controversially denied after the Bunker deemed he had lost possession as he stretched out one-handed to put the ball down.

With the likes of Frizell and Dane Gagai back in the side, Newcastle were far more threatening early on than in recent weeks.

But it was not to be with the Knights suffering their eighth defeat in 11 games this season.

The loss puts them at risk of falling back into last place after this round. 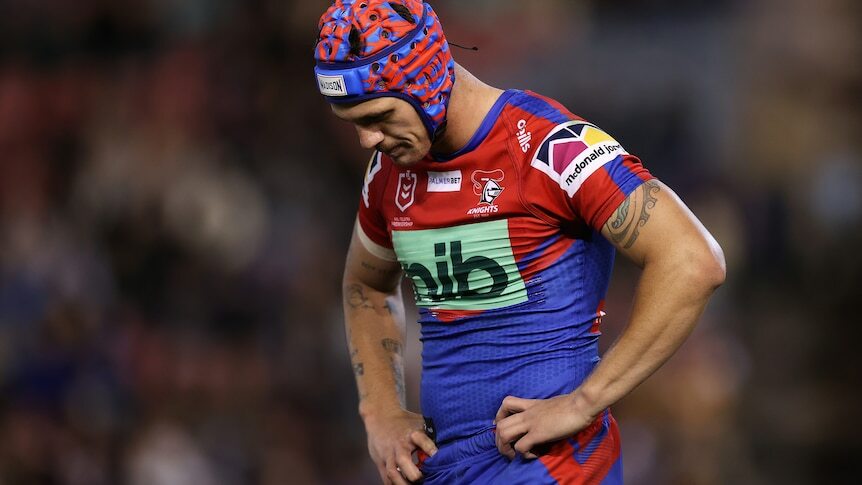 Brisbane's renaissance in 2022 has continued with the Broncos claiming a 36-12 NRL victory over Newcastle.