Knights' oldest fan will be watching the game from above 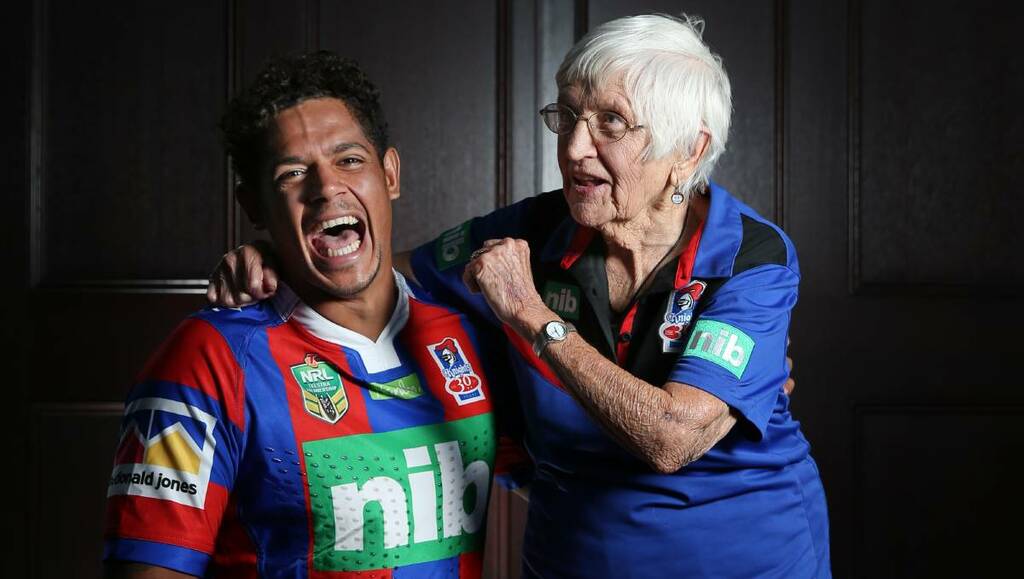 When the Newcastle Knights run out onto Browne Park in Rockhampton on Sunday afternoon to take on Parramatta, they'll have the bulk of the Hunter's rugby league fans cheering them on. However, they will be without perhaps their oldest and most loyal fan, Patty Smith, who passed away in late July at the age of 99.

A diehard fan since the club's inception in 1988, Patty was present for all of the club's biggest moments. From the first ever competition game at the ISC back in 1988, to that unforgettable day in '97 and that magical night in 2001, she was there.

But she wasn't just in it for the good times. Patty was also there when the Knights were towelled up 62-0 at home by Cronulla in 2016. When Joey Johns was laid out by Sonny Bill Williams in round 1, 2007, never to play in front of a home crowd again. And when the team lost 26-18 to the Sharks on September 3, 2017, condemning them to their third straight wooden spoon, Patty was there, sitting in her same seat, just to the left of the goalposts on the southern hill, proudly wearing her Knights jersey and Novocastrian loyalty. So strong was her dedication that it was more than 20 years before she missed a home game.

Speaking of home, walking into Patty's house at the top of Goundry Street, Gateshead, where she lived for more than 60 years, was like entering a red and blue shrine. The walls were adorned with club posters, Knights clocks and countless photos of Patty - wide-grinned and bright eyed - alongside the likes of The Chief, Robbie O' and Kurt Gidley, just to name a few.

In her latter years, Patty's passion even garnered her a certain level of fame.

As the Knights' oldest season ticket holder, in 2010 she was invited onto the field at the tender age of 88 to toss the coin before a game.

In 2017, she was invited into the stadium to celebrate her 95th birthday with the players. In the same year she even featured on the front page of the Newcastle Herald, slapping a big fat kiss on Dane Gagai's cheek.

But Patty was far more than just a footy fan.

While the Knights might have lost one of their most loyal supporters, in many ways the city has also lost a slice of its history. Patty, who lived her entire life in the Hunter, bore witness to some of the most important events of the past century.

Born Patricia Daisy Howley on April 6, 1922, she grew up with her parents and two older brothers, Edwin and Athol, in Tighes Hill. As a schoolgirl she lived through the awful poverty of the Great Depression in Newcastle, so bad that it forced many Novocastrians into makeshift shanty towns.

She also experienced the anxiety and fear of World War II. Like many women at the time, Patty worked in a munitions factory at the BHP. And in the early hours of June 8, 1942, she was given a very early wake-up call - in the form of Japanese submarine shells rattling against Newcastle's East End.

"I heard these big loud bangs coming from the harbour," Patty later recalled. "I woke my mum up and said, 'Do you hear that?' We were afraid, I really thought we were about to be invaded."

Patty also experienced the changes and challenges associated with being a woman in the 20th century. As a single mother of five (Laurie, Ken, Julie, Geoff and Sharon), she toiled hard to make ends meet, working as a barmaid and house cleaner to make sure that the family never missed out on anything.

A diehard fan since the club's inception in 1988, Patty was present for all of the club's biggest moments.

Coming in at barely five feet tall, what Patty might have lacked in height she more than made up for in energy and zest for life. A lover of the Beatles, ABBA and any chance to jump into the surf, she was a very Novocastrian barrel of laughs. And despite some of life's hardships, she never forgot how to have a good time.

On one particular evening spent at the Mattara Hotel at Charlestown back in the 1960s, she even inadvertently stole a car. "Back in those days, Holden keys could more or less open any Holden car," Patty's son Ken explains. "So Patty, after a few too many shandies, stuck the key into some other Holden and drove it home."

It was only after Ken arrived home from his late shift on the railways some hours later that he alerted her to what she'd done. They quickly took the stolen car back to the pub and stealthily drove hers - sitting on its lonesome in the Mattara carpark - home, with Patty hoping she'd never have to hear of the ordeal again.

"But the next week Mum went back up to the pub and one of her friends started with this story," Ken recalls. "He said, 'You'll never believe it, but last week someone stole my bloody car. Anyhow, they must have got scared and brought it back the next day - but not before the lowlife bastard made sure to wreck my gearbox!' Well, Mum nearly fell off her chair. But she made sure she never told him it was her!"

In a society and time where flashy celebrities, outlandish pundits and high-paid footy players dominate the headlines, Patty's life well lived is a reminder of the big impact that the 'little people' in society can have. And as the team runs out on Sunday, there'll be thousands of people across the Hunter tuning in. Normal, humble Novocastrians, just living their life and, without knowing it, writing their own little piece of history.