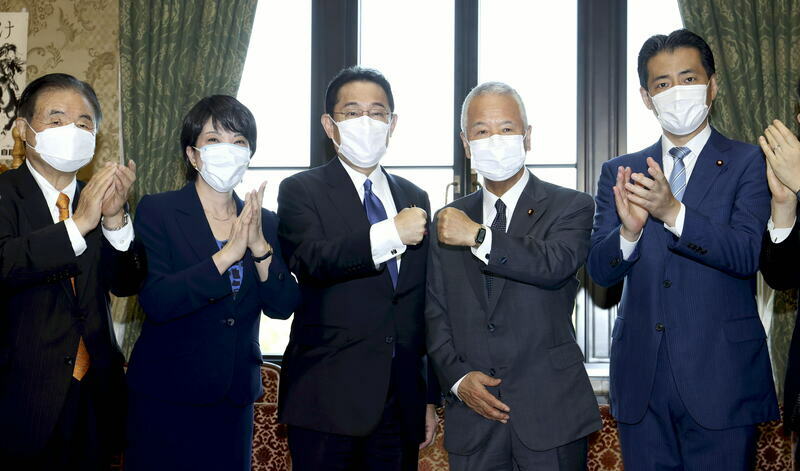 Prime Minister Fumio Kishida's decision to hold a House of Representatives election on Oct. 31 is aimed at maintaining the momentum from the Monday launch of his Cabinet until the poll, and at securing a victory for the ruling coalition while the COVID-19 pandemic is abating.

The success of this "surprise attack" depends on whether Kishida can start his administration smoothly.

Kishida reportedly told Komeito leader Natsuo Yamaguchi Monday morning by phone that there would be a lower house election on Oct. 31.

"I want to hold it while the new government has momentum," the prime minister was quoted as saying.

Initially, the ruling Liberal Democratic Party and Komeito were considering a date of Nov. 7, with official campaigning for the general election to kick off on Oct. 26. This was considered the fastest course, announcing the dissolution of the lower house around the time of Kishida's policy speech on Oct. 8.

The coalition thought the new prime minister would answer questions about the policy speech from representatives of each party on Oct. 11-13, and then dissolve the lower house on Oct. 14.

However, Kishida is believed to have been concerned that the momentum from the LDP's presidential election and the inauguration of a new Cabinet might subside by the end of this month. The number of people newly infected with the novel coronavirus nationwide has been declining but could begin to climb again, as popular tourist spots across the country began to bustle after the state of emergency against the virus was lifted.

Having finished his telephone calls to everyone who was offered a cabinet position by Sunday evening, Kishida met with lower house member Seiji Kihara, who will serve as deputy chief cabinet secretary. and former economy, trade and industry vice minister Takashi Shimada, who will be a secretary to the prime minister, at the president's office on the fourth floor of LDP headquarters, according to LDP sources.

Then a calculated move was devised to announce on the day the Cabinet was inaugurated that the election would be on Oct. 31, with official campaigning to kick off on Oct. 19, moving up the schedule by a week. It reportedly takes about two weeks for local governments to prepare for an election, and Oct. 4 was the latest date that municipalities could handle an official announcement on Oct. 19.

With the vote on Oct. 31, it will be difficult for Kishida to attend the Group of 20 summit to be held in Rome on Oct. 30-31, but the fact that he was unlikely to have enough time for a first meeting with U.S. President Joe Biden also made him opt for the revised election schedule.

LDP Diet Affairs Committee Chairperson Hiroshi Moriyama reportedly told Kishida it was the "normal course of constitutional politics" to shorten the period beyond the end of the lower house members' terms on Oct. 21. If the vote is held on Oct. 31, the interval between the end date and the day of voting can be minimized.

Responding to the bold action by Kishida, who has a reputation for being cautious, a young member of the Kishida faction said, "I felt he does make decisions when he needs to as prime minister."

However, it is unclear whether the move will prove effective in the upcoming lower house election. If a headwind comes up as a result of a ministerial scandal or some other problem, the ruling parties will be forced to wage an election campaign without time to deal with it.

Former Prime Minister Shinzo Abe was briefed by Kishida on the new election schedule, and reportedly praised him for demonstrating strong leadership. However, Abe told people around him that it remains to be seen whether the results will be good or bad.

"Still, luck is something you have to grab for yourself," Abe was quoted as saying.