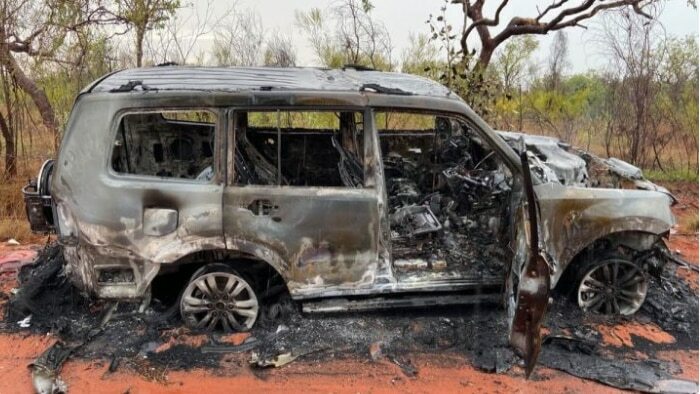 As WA government ministers and community leaders gather for their second crisis meeting in as many weeks, a leaked briefing note has painted a grim picture of the crime plaguing Kimberley communities.

The note was prepared in the wake of an initial meeting held in Perth last week, after months of tension triggered by escalating juvenile crime in Kimberley communities.

Citing information from WA Police, it reveals juvenile offending across the region is up 54 per cent on the previous two-year average, with 526 burglaries reported during 2021 alone, and 273 children identified as involved with serious offending.

Police have also raised concerns about the increasingly brazen offending, citing ram raids, the ramming of a police vehicle that left a Fitzroy Crossing sergeant seriously injured, and the death of a 12-year-old girl in a stolen car in the town last year.

The widely-shared video of a young child smoking a bong in Derby, egged on by adult onlookers, was also highlighted.

It also noted a "sense of impunity" from some offenders who struggled to see Banksia Hill Detention Centre as a punishment.

Corrective Services Minister Bill Johnston and Child Protection Minister Simone McGurk were not able to attend but were later briefed by their staff.

In a public statement put out after the meeting, a spokesman for Ms MacTiernan said there was no overnight fix for the problem, but the state government would be undertaking an audit of all services and programs currently running in the Kimberley to "get a better understanding of what is working, and where resources could be better directed".

A second meeting will be held later this week.

Confetti of funding to 'modest programs'

News of the audit has come nearly 18 months after the start of the Kimberley Juvenile Justice Strategy rollout.

The documents obtained by ABC confirm the Department of Justice requested $30 million for the project, but the bid was knocked back by cabinet.

Instead, $7.8 million has been allocated to a series of crime prevention programs such as night patrols and on-country camps.

But Kimberley community leaders have expressed concerns about the strategy, saying it's nowhere near what is needed to rein in the offending.

The briefing note conceded the money had mostly gone to "modest preventative programs".

The note acknowledged gaps in services including on-country alternatives to prison and residential facilities that help provide a safe place for children to go.

The document stated there had been discussions about converting the existing Wyndham work camp into a youth detention centre.

'The talk needs to end'

The insight into government thinking comes amid growing concern about potential vigilantism in WA's north.

There is growing frustration among Aboriginal community leaders.

"It's actually getting real, real bad," she said.

"You know, back in the 80s and 90s, you hardly ever heard of this sort of behaviour from the kids.

Fitzroy Crossing businessman John Rodrigues said his building had more than 30 break-ins over the course of November and December – including seven in a single night.

"We send the paperwork out to new employees and we feel really good that they're coming, [and then they Google Fitzroy Crossing] and we get the phone call.

"[The staff] have just had enough, they just want to go … mentally, physically, they have had enough."