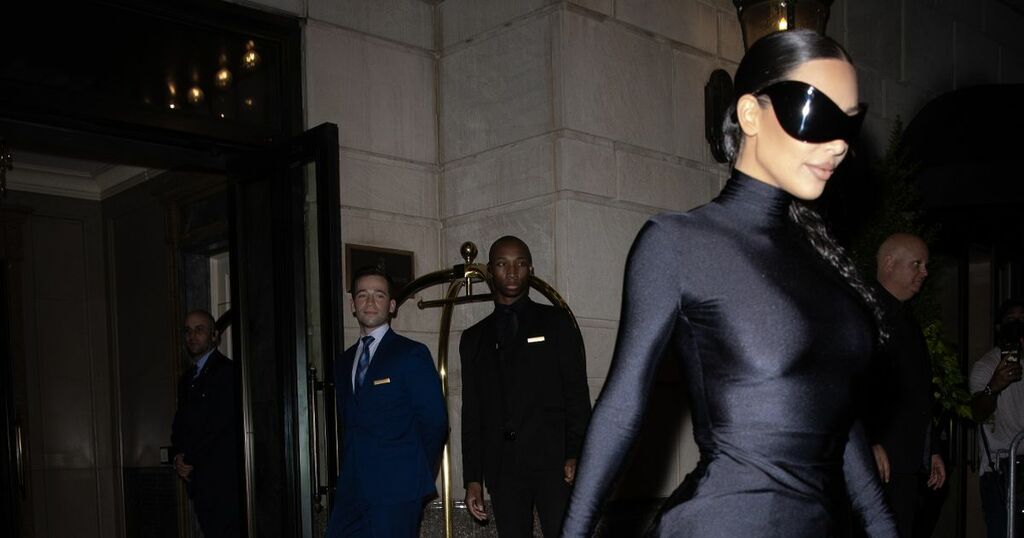 Kim Kardashian's Met Gala ensemble turned heads as she strode onto the red carpet at the Metropolitan Museum of Art in New York on Monday.

The American reality TV star, 40, decided to conceal her entire body in a black bodysuit - that even covered her entire face.

Kim's creation was put together by Balenciaga creative director Demna Gvasalia and after the main event, when she changed in order to attend Justin Bieber's after-party, the Keeping Up With The Kardashians star stepped out in a similar get-up - except she allowed part of her famous face to be seen as she unmasked.

However, keeping with her disguised style for 'fashion's biggest night out' the E! personality concealed her brown eyes behind large dark sunglasses.

The mother-of-four allowed her plump pout, nose and cheeks to be exposed and continued her sleek style with her raven locks pulled back into a low ponytail.

Kim's decision to wear the spandex black outfit - featuring long gloves and flowing dip hemmed skirt with a long train - is very different to the clothing she usually wears, as the curvy beauty is known for flashing the flesh and happily showcasing her hourglass shapes in skimpy outfits.

The bombshell caused a stir when she first rocked up to the Met Gala this week - which is usually on the first Monday of May but had to be postponed amid the pandemic - as she was seen posing alongside a man in matching attire, and fans had originally thought it was her estranged husband Kanye West.

But the man was actually Balenciaga's Demna.

Despite Kim and Kanye divorcing, TMZ report that the rapper was the driving force behind the look and that it's he who "gave Kim the courage to push the envelope with creativity and people's imagination through art."

Last week, Kim hinted that she was taking her fashion choices in a new direction when she attended a New York Fashion Week in a bondage mask.

Kim arrived at the Ritz Carlton in the Big Apple while dressed literally head-to-toe in leather and opted to shield her entire face under a black leather zentai face mask – which appeared to have the eye holes zipped closed as she strutted into the hotel.

She covered every inch of her skin as she wore leather trousers, thigh-high boots, a huge leather coat, and leather gloves.

The only thing exposed from her outfit was her hair – with a ponytail dangling from her head as she strutted her way in her thigh-high heels.