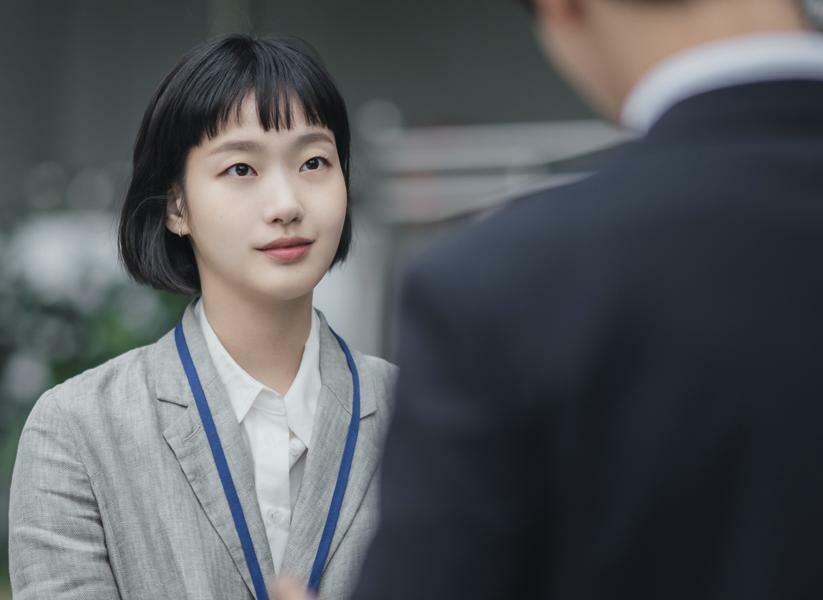 Yu-mi, the heroine of the Korean drama Yumi’s Cells, works as an accountant in a noodle company, but she also enjoys writing love stories. The cells in the title refer to the different cells in her brain that help her make or delay decisions. There’s a love cell, a hunger cell, an anxiety cell and a writer cell, just to name a few.

“Anyone can agonize over a problem and think ‘Is this better? Would that be better?’ as if cells were fighting in their head,” she said. “So I think it’s a concept that many people can relate to and enjoy. The expression, tone, and behavior of the cells change depending on the dialogue of the cells on set, so I try to harmonize the conditions of the cells with Yu-mi’s.”

Deciding to play Yumi did not involve any agonizing on her part. She already enjoyed the webtoon that Yumi’s Cells is based on.

“I’m a fan of the webtoon, and I think Yumi’s charm is her honesty and innocence,” said Kim. “I believe that’s what makes Yumi so lovely. And how Yumi matured in love and at work as the episodes progressed was what attracted me to the role.”

The webtoon Yumi’s Cells ran for more than five years and attracted over three billion visitors, so there’s a certain amount of responsibility that comes with portraying such a beloved character.

“Since the original is so good, a lot of people are working hard to make a great art piece like the original,” said Kim.

Quite a few recent hit Korean dramas—Nevertheless, Navillera, The Uncanny Counter, Kingdom, and True Beauty—are based on popular webtoons. Kim starred in the webtoon-based Cheese In The Trap, while her Yumi’s Cells co-star Ahn Bo-hyun starred in the webtoon-inspired drama Itaewon Class. The actress credits the heightened popularity of such dramas to the fresh source material.

“It’s because webtoons use subject matter that isn’t commonly seen in previous dramas or movies, and there are many good works that can be reproduced in various ways,” she said. “That’s why it can form a solid fandom, and since the original work has already been verified by many, it is often used as a source for dramas and movies.”

Kim acquired a solid fandom of her own after co-starring with Park Hae-jin in Cheese in the Trap, then co-starring with Gong Yoo in Guardian: The Lonely and Great God, aka Goblin, and most recently playing Lee Min-ho’s love interest in The King: Eternal Monarch. Goblin became the fifth highest rated drama in Korean cable television history and won a Grand Prize at the 53rd Baeksang Arts Awards.

Past success does not create any pressure when it comes to choosing subsequent roles, said Kim. Nor does past success necessarily make acting any less challenging.

“I am very grateful for the success of Goblin, but it doesn’t affect me when I choose a project or work on a project,” she said. “There’s always a sense of fear, excitement, and responsibility when I start a new project.”

The actress debuted in the 2012 film A Muse which earned her several Best New Actress awards. Being naturally shy, she felt nervous at first, but acting quickly became exhilarating and she never wanted to stop.

“When I act and when I am just me are different,” she said. “I’m not shy when I act because it is about showing and expressing a character, but I’m shy when I have to show myself and talk about myself.”

Her upcoming drama will use a combination of live action and 3D animation to illustrate Yumi’s thought processes. It will be the first Korean drama to use the format.

“Because it’ll be reborn as a live-action drama, there will be parts that couldn’t be expressed as a webtoon. So I think the fans who like the existing webtoon and also the viewers who have never read it will enjoy it.”

The series, directed by Lee Sang-yeob of My Holo Love and Familiar Wife, is expected to premiere in 160 countries worldwide.