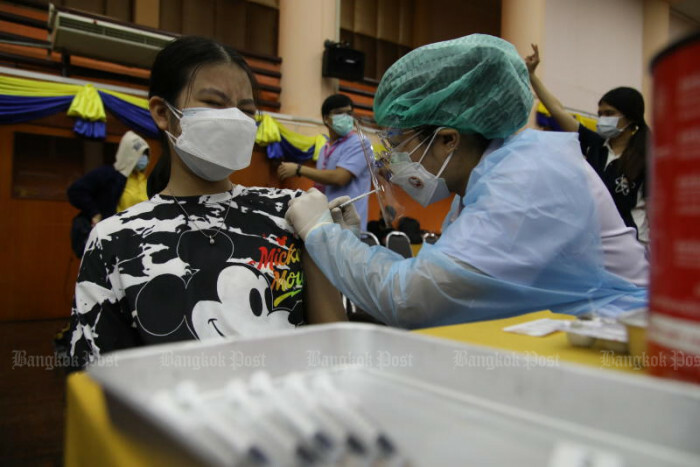 Random antigen testing will be carried out among school children before the new term begins next month, says deputy government spokeswoman Rachada Dhnadirek.

The tests will be conducted every two weeks among 10-15% of returning pupils as well as other youngsters aged 12-18, some of whom have been vaccinated.

Ms Rachada said the antigen test would boost the confidence of students and parents ahead of on-site classes resuming on Nov 1.

Since the launch of nationwide Pfizer inoculations for people aged 12-18 on Oct 7, 150,190 have received their first dose and 1,825 have had both injections.

There are around five million people aged 12-18. Of them, 3.8 million have been targeted for the vaccination.

Ms Rachada added the government was aware some young people were worried about their safety. Some turned to video-sharing social network TikTok to convey their doubts.

Moving to allay their fears, Ms Rachada insisted the vaccine met global standards of manufacturing and has been approved for use by the World Health Organisation as well as Thailand's Food and Drug Administration.

Although the Pfizer vaccine may cause some undesirable side effects such as muscle ache, tiredness and nausea, and possibly conditions including myocarditis, its benefits in warding off or reducing severe infections and hospitalisation outweighed the risks, she said.

Many countries such as the US, UK, Japan, Spain and Norway have been vaccinating their young people.

Pfizer-BioNTech is seeking approval from the US's Food and Drug Administration for the use of its vaccine on children aged 5-11, said Ms Rachada.

Meanwhile, the Department of Health (DoH) has recommended schools conduct regular antigen testing after the new term starts and students return to class.

DoH deputy director-general Sarawut Boonsuk said 68 schools nationwide have piloted safety zones over the past two to three months, and that rigorous measures are creating a Covid-free environment in schools.

One measure was that businesses and shops located within 10 metres of a school fence must be evaluated for their Covid-19 risks.

Also, classes must be limited to no more than 25 students and at least 85% of teachers and non-teaching staff must be fully vaccinated.