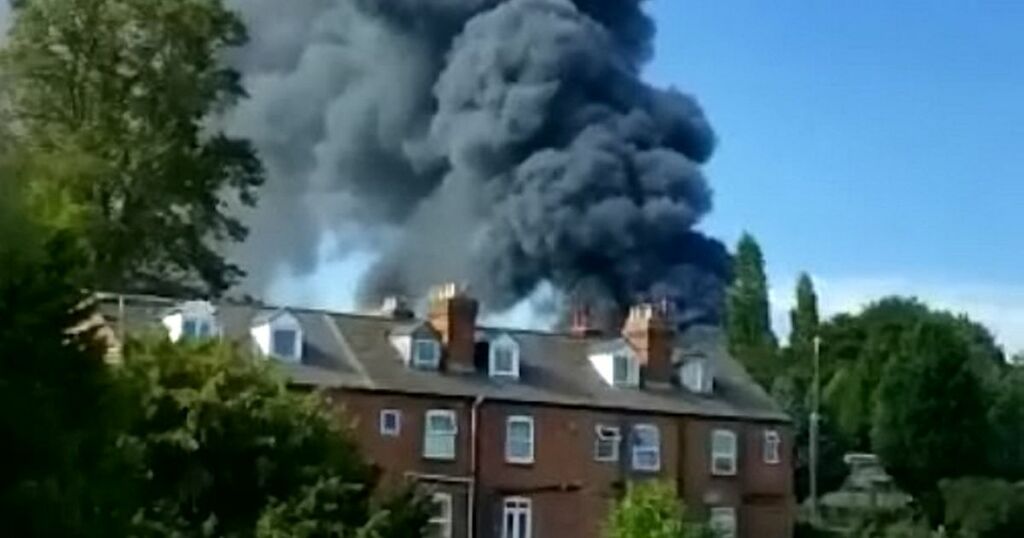 A huge fire is reportedly still spreading across an industrial site in Kidderminster as residents nearby report loud explosions.

Fire crews were called to the scene in Park Street, Kidderminster, Worcestershire, at about 2:50pm.

Images from the scene showed thick, black smoke billowing into the air over residential streets as police asked people to avoid the area while road closures were put in place.

A nearby school warned parents of possible "gridlocked" traffic at pick-up time.

West Mercia Police said roads were closed at Park Street with Park Lane and Castle Street and at Bewdley Road by the hospital.

Did you witness the blaze? Get in touch at webnews@mirror.co.uk

Hope everyone is safe and sound.

"Yet again, a huge thanks to all those in the emergency services keeping us safe."

Heather Jones, who lives about a five minute walk from the fire, said when it first broke out the smoke was "incredibly dark" and there were "tremendous explosions", reports the BBC.

"The sky is filled with clouds, all I can hear is sirens," she said.

"But I have to say as well... police been out there and cordoned off the road so people can't come past... they are keeping traffic under control, they are doing a fantastic job."

Hereford and Worcester Fire and Rescue Service asked people in the area to keep their windows closed.

Public Health England also said people should close windows to avoid smoke inhalation: "Any smoke can be an irritant.

"If people are outdoors near Fire in Kidderminster they should avoid/limit time spent in areas affected by smoke/ash.

"Substances in smoke can worsen health problems like asthma &heart conditions so people should carry their medication if near."