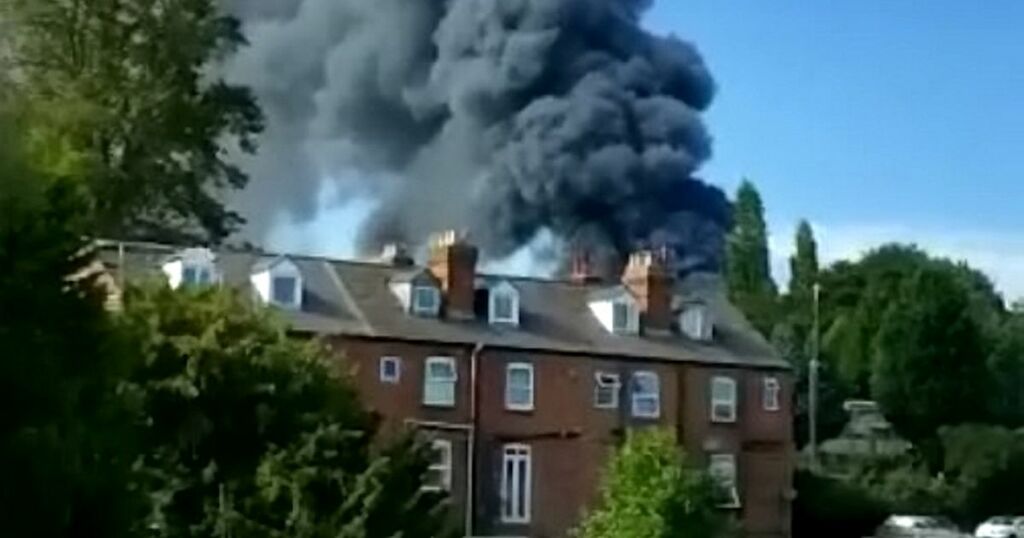 At least 16 schools are closed as a huge industrial fire sees thick black smoke billow into the air for miles.

Emergency services, including police officers and firefighters, were called to the scene of the blaze in the area of Park Street of Kidderminster yesterday afternoon.

Residents nearby have been evacuated from their homes and others were warned to keep their windows closed.

Pictures and videos taken by residents and passers-by showed black smoke, visible from miles away, billowing from the site.

This morning the fire is under control but a number of schools in the area have been closed for the day.

A dog was dramatically rescued with the drama caught on video.

Dan Evans, who works yards away from the fire in a nearby unit making camper vans, ran to the scene to save his beloved pet as fire tore through units on Park Street.

He described the incident as 'horrific' and said it 'was like something from a movie'.

He recalled how he ran from the scene, before realising he had left his beloved pet dog behind.

"We managed to get all the vans out and ran off down the road," Dan said. "Then someone said 'where's the dog?', I said 'oh my God!' he was still in the unit.

"It turned out he was lying outside, sunbathing, pretty chilled out. I was more panicked than he was."

Dan told of the moment a worker from the chemical factory alerted them to the fire.

He said he thought it was 'a joke' - until he stepped outside and saw the flames.

"The lad from over the road came running in and asked if we had seen what was happening. I had no idea. There was thick smoke, explosions, it was like bonfire night," he added.

"It's a chemical factory where it started. I have a lot of friends in adjacent units who are going to lose their businesses, it's absolutely devastating to be honest. It hasn't sunk in yet."

West Mercia Police had warned people to avoid the area yesterday as road closures were in place.

A police spokesman said: "Please avoid the area while emergency services respond as there will be road closures in place."

Have you been affected by the fire? Email webnews@mirror.co.uk

A 'rest centre' has been set up for residents affected by the evacuation.

"Some homes have been evacuated and our rest centre is available for anyone from these areas who does not have alternative accommodation. We are here to help."

A full list of school closures has been released by Birmingham Live:

And The Beacon Primary PRU's Kidderminster site will be closed.