The U.N. climate panel has released its most comprehensive assessment of climate change yet.

Here are some of the report's main conclusions:

HUMANS ARE TO BLAME - FULL STOP

The Intergovernmental Panel on Climate Change (IPCC) used its strongest terms yet to assert that humans are causing climate change, with the first line of its report summary reading: "It is unequivocal that human influence has warmed the atmosphere, ocean and land."

The stark language marked a shift from previous IPCC reports, which had said it was "extremely likely" that industrial activity was to blame.

The report describes possible futures depending on how dramatically the world cuts emissions.

But even the severest of cuts are unlikely to prevent global warming of 1.5 degrees Celsius above preindustrial temperatures. Without immediate steep emissions cuts, though, average temperatures could cruise past 2C by the end of the century.

The scientists also looked at events considered less likely but still possible, and they could not rule out big impacts from so-called tipping points, such as the loss of Arctic ice loss or the dieback of forests.

WEATHER IS GETTING EXTREME

Weather extremes once considered rare or unprecedented are becoming more common -- a trend that will continue even if the world limits global warming to 1.5C.

Severe heat waves that happened only once every 50 years are now happening roughly once a decade. Tropical cyclones are getting stronger. Most land areas are seeing more rain or snow fall in a year. Severe droughts are happening 1.7 times as often. And fire seasons are getting longer and more intense.

"In the past, people would say 'you can't say anything about any individual event,'" said IPCC co-author Michael Wehner, a climate scientist at the Lawrence Berkeley National Laboratory in California. "But now we can actually make quantitative statements about extreme weather events."

ARCTIC SUMMERS COULD SOON BE FREE OF ICE

Summertime sea ice atop the Arctic Ocean will vanish entirely at least once by 2050, under the IPCC's most optimistic scenario. The region is the fastest-warming area of the globe - warming at least twice as fast as the global average.

While Arctic sea ice levels vary throughout the year, the average lows during summer have been decreasing since the 1970s and are now at their lowest levels in a thousand years. This melting creates a feedback loop, with reflective ice giving way to darker water that absorbs solar radiation, causing even more warming.

SEAS WILL RISE NO MATTER WHAT

Sea levels are sure to keep rising for hundreds or thousands of years. Even if global warming were halted at 1.5C, the average sea level would still rise about 2 to 3 meters (6 to 10 feet), and maybe more.

Sea level rise has picked up speed, as polar ice sheets melt and warming ocean water expands. Already, associated flooding has nearly doubled in many coastal areas since the 1960s, with once-in-a-century coastal surges set to occur once a year by 2100.

Scientists could not rule out extreme rises of more than 15 meters by 2300, if tipping points trigger runaway warming. "The more we push the climate system ... the greater the odds we cross thresholds that we can only poorly project," said IPCC co-author Bob Kopp, a climate scientist at Rutgers University.

RUNNING OUT OF TIME

Meeting the Paris Agreement goal of limiting warming to 1.5C will require sticking to a "carbon budget," a term describing how much additional carbon can be pumped into the atmosphere before that goal is likely out of reach.

The world is now on track to use up that budget in about a decade.

With 2.4 trillion tons of climate-warming CO2 added to the atmosphere since the mid-1800s, the average global temperature has risen by 1.1C. That leaves 400 billion tons more that can be added before the carbon budget is blown. Global emissions currently total a little more than 40 billion tons a year. 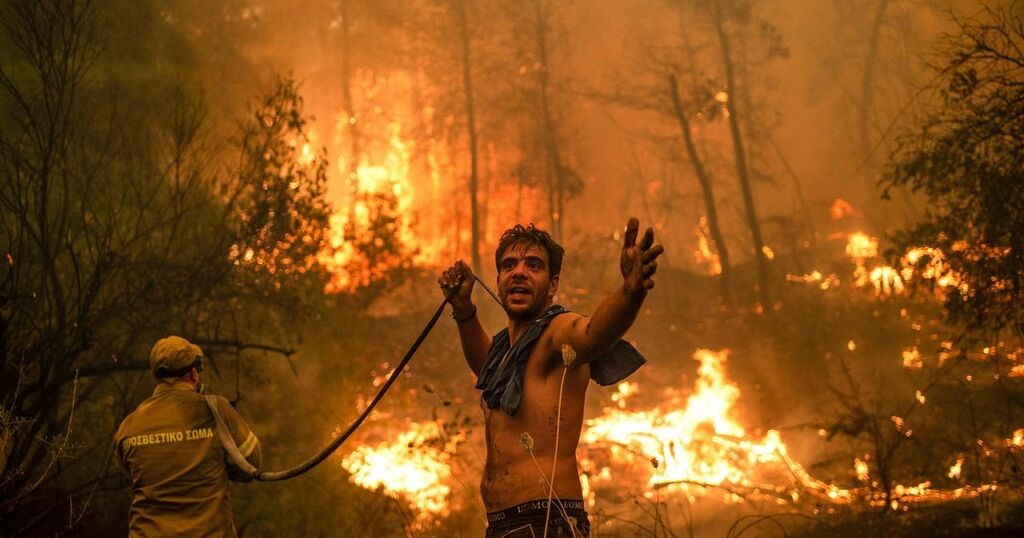 Daily Mirror
One subscription that gives you access to news from hundreds of sites
U.N. climate change report sounds 'code red for humanity'

Global warming is dangerously close to spiralling out of control, a U.N. climate panel said in a landmark report Monday,…

The IPCC report released today finds that, without “immediate, rapid and large-scale reductions in greenhouse gas emissions,” it will be…