By Ros Krasny and Ana Monteiro

WASHINGTON _ Sen. Lamar Alexander will vote to acquit Donald Trump, even though he says the president crossed a line by delaying U.S. aid to Ukraine as a way to "encourage" an investigation into a political rival _ the issue at the heart of Trump's impeachment.

Meanwhile, polling released on Sunday showed Americans remain deeply divided over Trump's impeachment, mostly along partisan lines, and that the events of recent weeks have done little to shift opinion.

"I'm going to vote to acquit. I'm very concerned about any action that we could take that would establish a perpetual impeachment," Alexander, a Tennessee Republican who is retiring this year, said on NBC's "Meet the Press," according to a transcript provided by the network.

"I think it was wrong. Inappropriate was the way I'd say _ improper, crossing the line," Alexander said of Trump's conduct toward Ukraine. "And the only question left is who decides what to do about that."

"The people. The people, is my conclusion," he said.

The Senate on Friday sent the monthslong impeachment inquiry to its final stages. A vote to acquit the president is set for Wednesday, after Republicans defeated Democrats' efforts to call new witnesses.

Senators will hear closing arguments Monday from lawyers for both sides, then will have two days for debate before voting.

That pushes the end of the process beyond the Iowa caucuses on Monday, the first votes to be cast in the 2020 presidential nomination procedure, and also past Trump's State of the Union address on Tuesday evening.

Alan Dershowitz, one of Trump's lawyers, said on "Fox News Sunday" that Democrats had failed in their goal to show that Trump needed to be removed from office.

"He hasn't been acquitted, but he also hasn't been charged," Dershowitz said of Trump. "It's the fault of (House Speaker Nancy) Pelosi for failing to charge an impeachable offense."

A possible quid pro quo with Ukraine matters "if what the president did was illegal or wrong," Dershowitz said. But "if it's not criminal, it doesn't matter what the motive is."

Majorities believe the president abused his power in the Ukraine matter, and then obstructed Congress to stymie the investigation. But only 46%, mostly Democrats, would back Trump's removal from office, according to a NBC News/Wall Street Journal survey. That's essentially unchanged from December.

"Public opinion looks like it did from the start: It was a hung jury then and it is a hung jury now," said Democratic pollster Jeff Horwitt of Hart Research Associates, who conducted the survey with Republicans pollsters at Public Opinion Strategies.

Many Democrats were already looking ahead to November.

"The Senate is the jury today, but we are the jury tomorrow and we get to send a message at the ballot box," Democratic presidential candidate Pete Buttigieg, the former mayor of South Bend, Indiana, said Sunday on CNN's "State of the Union."

"This is actually the year where there is accountability for the president," Buttigieg said in a separate interview on NBC.

Sunday's NBC/Wall Street Journal poll showed the intensity of support for Trump is on the rise. The president's overall approval was at 46%, consistent with levels from the past 18 months, but his "strong" job approval reached an all-time high.

The poll was conducted Jan. 26-29 of 1,000 registered voters, and had a margin of error of plus or minus 3.1 percentage points.

_With assistance from Hailey Waller. 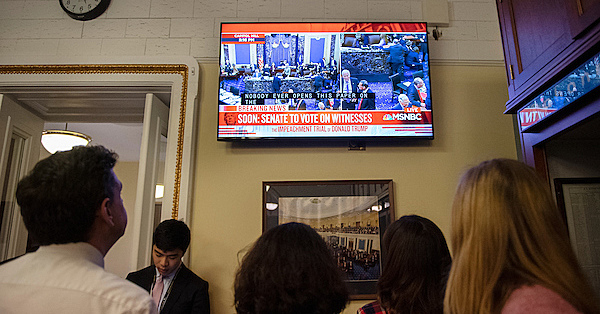 An impeachment acquittal was always a near-certainty.

The Independent UK
Senate Votes No On New Witnesses In Impeachment, Signaling End To Trump’s Trial

Senators voted 51-49, as the GOP moved closer toward acquitting Trump.

Forbes
Key Republican senator a 'no' on witnesses at Trump trial

This result was largely expected.