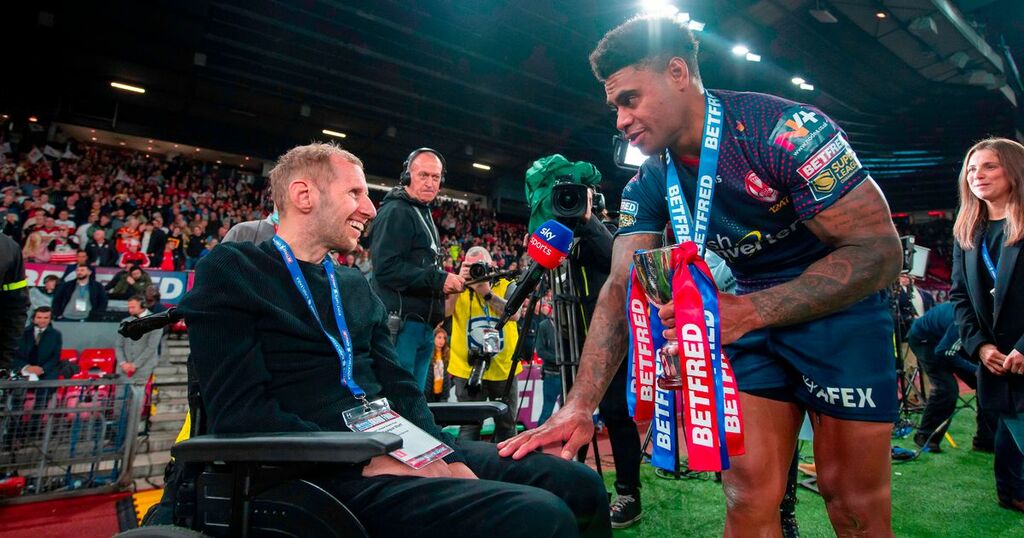 Kevin Naiqama had some kind words to Rob Burrow after securing the Super League title for St Helens.

The Fijian will be leaving the team after three very successful seasons, in which he tasted success on each occasion.

His brace helped St Helens clinch their third straight Super League title and defeated the Catalans Dragons in a tight match by a score of 12 points to 10.

An emotional Naiqama gave a heartfelt interview pitch-side and shared some lovely words with Burrow who was in attendance.

He was presented with the Player of the Match award by the St Helens legend’s wife and daughter Lindsey and Macey Burrow, before turning to the former Scrum-half.

"Thank you so much mate, for everything you've done for the game. I really appreciate you, you are a true legend,” he told Burrow - who was diagnosed with motor neurone disease (MND) IN 2019.

"I am so grateful for this award, thank you so much. You are an absolute legend of this game."

The Fiji captain will return to Australia for family reasons and even hinted that he is likely to retire, but did not rule out playing for a new team.

"If that call came I wouldn't put the phone down and would explore that but it will probably be my last game," Naiqama explained.

"I think it's retirement. If I was going to play I'd have loved to stay but outside circumstances with my wife and my family has led to this decision to go back home. You couldn't write a better fairytale.

"It was a difficult decision because I've loved my time here. They've provided a great support network for me and my wife, I'm definitely going to miss this team, the coaches and fans.

"I've really enjoyed my stay here and I think they've done more for me that I've done for them."

Table-toppers Catalans were denied a first Super League title with Saints running out supreme. And it was an agonising defeat for them, with Mike McMeeken’s try having put them in front with just 15 minutes left.

But then Naiqama stepped up to the plate for St Helens, writing his name firmly into the club’s history books.

Naiqama had to leave the field with a head knock in the act of scoring that went unpunished - but full-back Lachlan Coote nervelessly kicked the extras to clinch a third consecutive title in his final act before joining Hull KR.