You just had to post those parenting videos, Kevin Federline.

Britney Spears’ public spat with her ex-husband escalated late Wednesday night when Federline uploaded three videos taken by the former spouses’ sons, Jayden and Sean Federline, as their mother, um, mothered them. The videos were from four years ago, when the boys were 11 and 12.

“I can not sit back and let my sons be accused in this way after what they’ve been through. As much as it hurts us, we decided as a family to post these videos,” Federline, 44, captioned the videos on Instagram. “This isn’t even the worst of it. The lies have to stop. I hope our kids grow up to be better than this.”

In the short clips, as described by Page Six, Spears chastises one of her boys for going into an ice cream shop with no shoes on and, in another video, tells a son to respect her — it’s her house, she says sternly — when she enters his room to give him lotion for his “coarse” face.

In the third video, Spears and sons Jayden and Sean argue about who is interrupting whom, with Jayden saying to his mother, “I think you just care about yourself, because you won’t let us speak one word and you won’t let us go anywhere we wanna go.”

Federline has since taken down the videos, perhaps in response to backlash. As of Friday morning, his Instagram account had zero posts.

“It’s so bizarre that Kevin Federline is posting videos of Britney’s kids ‘arguing’ with her that are just her being a parent while they are mad disrespectful to her,” cultural critic and feminist writer Roxane Gay tweeted Thursday. “Like ... good for her knowing what it means to parent.”

“Dear Kevin Federline. You released a “scathing” video of a mom being a mom. Sometimes moms -gasp - have reactions,” tweeted Ally Reid, a radio host in Albany, New York. “They might discipline by taking things away or ask for respect. This is shocking but sometimes moms will argue with their kids.”

“Kevin Federline is a miserable excuse for a father. That is all,” tweeted “Skylanders Academy” voice actor Greg Ellis.

The drama started over the weekend after the Daily Mail posted tidbits from Federline’s upcoming ITV tell-all interview.

“The boys have decided they are not seeing her right now,” Federline said. “It’s been a few months since they’ve seen her. They made the decision not to go to her wedding” to Sam Asghari in June.

He also said Sean and Jayden had been affected by they mother’s habit of regularly posting nearly-nudes on her Instagram account.

“I try to explain to them, ‘Look, maybe that’s just another way she tries to express herself.’ But that doesn’t take away from the fact of what it does to them. It’s tough,” Federline told ITV. “I can’t imagine how it feels to be a teenager having to go to high school.”

Spears’ ex initially got full custody of Sean and Jayden following the couple’s divorce in 2007, but that agreement changed over the years to allow the pop star more visitation. Only recently did the boys tell their mom they would be spending most of their time with their dad.

After Federline’s recent remarks, Spears chimed in this week in her Instagram Story, which has since expired, saying in part, “It’s hard for me to let go of things I truly love ... like my kids. The situation should have 100 percent been dealt with privately and definitely not online !!!”

She continued, writing, “Yeah, I know that teenagers are just hard to deal with at that age … but COME ON, there’s being rude then there’s being HATEFUL … they would visit me, walk in the door, go straight to their room and lock the door !!! The [court-appointed] MONITOR would tell me that he just likes to be in his room … I’m like why come visit me if they don’t even visit me !!! But I never said that because I have to be kind !!!”

She also laid out an accusation of marijuana use at the Federline home, writing, “I can guarantee you, that house has more weed than Ludacris, 50 Cent, Jay Z and Puff Daddy combined!” (That comment earned her some backlash because she mentioned only Black artists.)

“I can’t process how I dedicated 20 years of my life to those kids ... everything was about them !!!,” Spears wrote as the post neared its end. “For them to knock the breath out of me ... see you can’t fix me !!! No therapy or sense of worship can fix my heart !!! I will forever have trauma and I know this, I’ve accepted it.”

Spears’ attorney, Mathew S. Rosengart, wasn’t having any of what Federline was selling, saying in a statement Thursday that he wouldn’t stand for any bullying of his client.

“Whether he realizes it or not, Mr. Federline has not only violated the privacy and dignity of the mother of his children, he has undermined his own children, whose privacy he should protect,” the lawyer said.

“Putting aside his ITV interview, Mr. Federline’s ill-advised decision to post an old video of his 11 and 12 year old children was cruel, bottom of the barrel stuff. It was abhorrent. In addition to demeaning himself and violating societal norms, he has now also created various legal issues for himself including, but not limited to, implicating cyber-harassment and cyber-bullying statutes, among other things.”

Rosengart said he was working with Instagram to make sure Federline was adhering to its rules and exploring “all appropriate relief against him.”

“In the meantime, as Britney herself poignantly said, whatever is occurring between her and her boys should remain private,” he added. “We urge Mr. Federline to act with a measure of grace and decency and to cease from publicly discussing private matters, which benefits no one.” 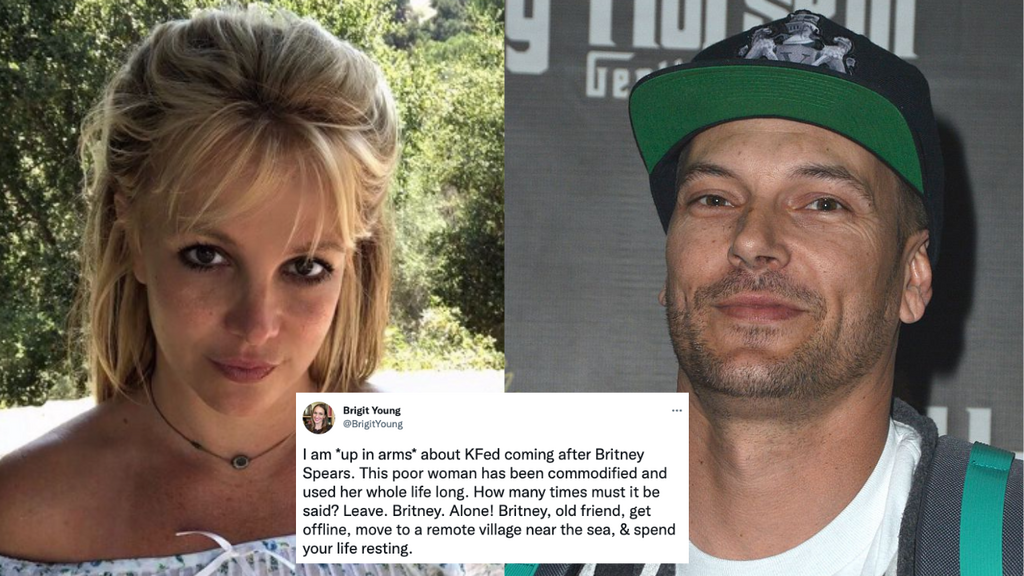 Kevin Federline Is Being Slammed For Leaking Private Videos Of Britney Spears Her Kids
Ugh.

Pedestrian.tv
From analysis to the latest developments in health, read the most diverse news in one place.
Who is Kevin Federline and what did he say about Britney Spears to anger her?

Everything you need to know about Britney Spears’ ex Kevin Federline

Kevin Federline, 44, posted videos of the singer, 40, arguing with their sons on Instagram on Thursday, telling Britney: "The…

‘Mr Federline’s ill-advised decision to post an old video of his 11 and 12-year-old children was cruel, bottom of the…

The Independent UK
One place to find news on any topic, from hundreds of sites.
Britney Spears’ bitter feud with ex-husband escalates