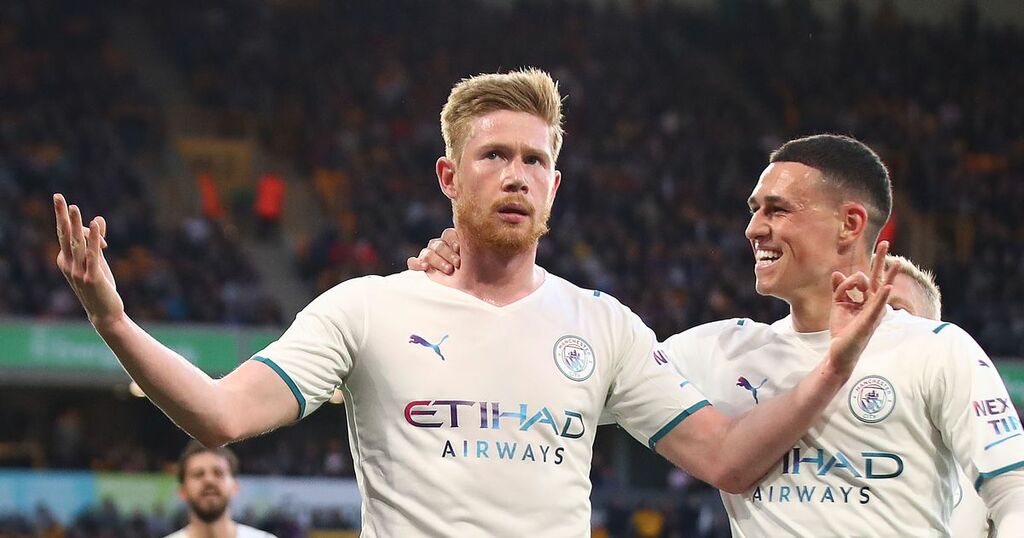 Kevin De Bruyne scored a sensational first-half hat-trick against Wolves in the Premier League, sending a message to Erling Haaland.

Kevin De Bruyne had a welcoming gesture for Etihad-bound Erling Haaland as he celebrated scoring his first Manchester City hat-trick against Wolves on Wednesday night.

The Belgian superstar struck three times in the first 24 minutes of the Premier League clash to put City firmly in command at Molineux, although Leander Dendoncker briefly drew the hosts level. De Bruyne's third of the match was the pick of the bunch as he lashed into the far corner on his weaker left foot, giving Wolves goalkeeper Jose Sa no chance with the powerful effort.

The attacking midfielder wheeled away to the corner flag to celebrate his hat-trick and appeared to send a clear message to Haaland - who will join City in a £51million transfer this summer - by copying the 'mediation' pose the striker has employed after scoring for Borussia Dortmund in the past.

The Norwegian previously opened up on his celebration, telling Esporte Interativo : "I really enjoy meditation. It makes feel calm and gives me tranquillity. This is why I sometimes celebrate like that when I score."

City fans are already relishing the prospect of De Bruyne and Haaland linking up next season and rival supporters likely fear they could do so to devastating effect. The latter has been tipped to become one of the greatest goalscorers in European football, but in the meantime De Bruyne continues to hog the limelight for the Sky Blues and scored his fourth of the evening on the hour mark.

Speaking on BBC Radio 5 Live, former England international Chris Sutton said of City's third against Wolves: "Remarkable goal from Kevin De Bruyne. You would have thought the Wolves midfielders would have caught on about giving him too much space. He is unopposed and he keeps going. Sa has no chance."

Is Kevin De Bruyne the best player in the world? Have your say in the comments!

At half-time, Sutton added: "Manchester City have been fearless and Kevin De Bruyne has epitomised this team. Three goals really well taken. It's a long way back for Wolves and it is very difficult to see them coming back into it in the second half. It looks like game, set and match for Manchester City."

De Bruyne's goals appeared to set City on course to restore their three-point lead over Liverpool at the top of the table. With just two games left to play - against West Ham and Aston Villa - Pep Guardiola's side are heavy favourites to defend their crown and win a fourth title in five years. The Reds are due to face Southampton and Wolves in their final two games.

Kevin De Bruyne scored a sensational first-half hat-trick against Wolves in the Premier League, sending a message to Erling Haaland.