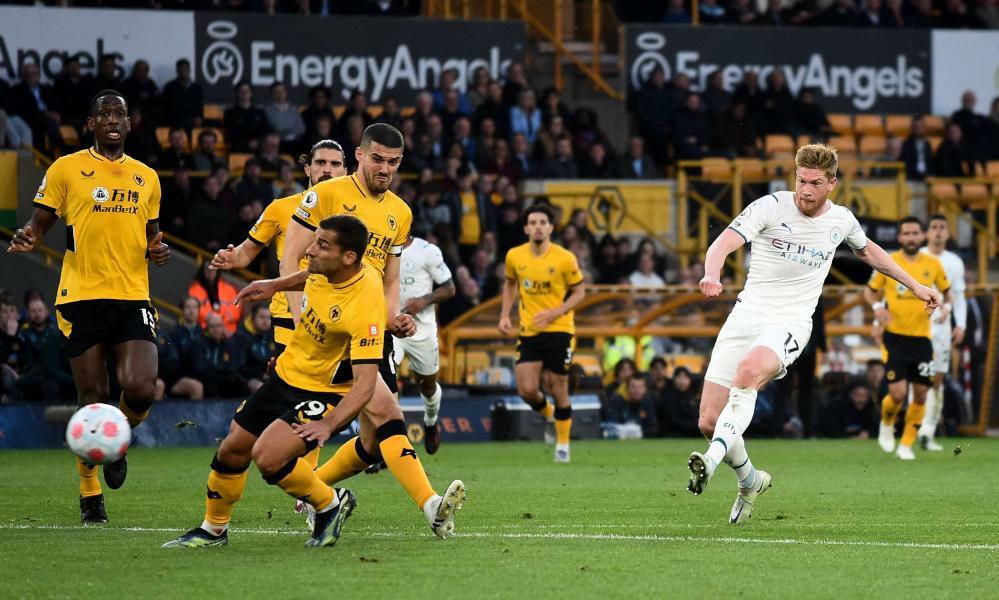 Newsroom.co.nz
From analysis to good news, read the world’s best news in one place
Friday favourite: The ‘expert sandbagger’ who became a BTCC legend

It was supposed to be Liverpool who were doing the quadruple, not Kevin De Bruyne. But, just as Manchester City agreed to sign a scorer, De Bruyne proved they already have one, borrowing Erling Haaland’s prolific streak and his trademark celebration. The £51m Norwegian should be a guarantee of goals next year but De Bruyne has garnished his all-round excellence with four in a game to make this the most productive season of his stellar career. He took his tally to 19 with a performance of extraordinary dominance. On nights like this, City may not need Haaland. With displays like this, a fourth league title in five seasons should be theirs at some stage in the next 11 days.

While Patrice Evra had claimed Pep Guardiola prefers players with no personality, De Bruyne stamped his authority on a potentially awkward occasion. Only Sadio Mane and Dwight Yorke had brought up a Premier League hat-trick within 24 minutes of the kick-off before. De Bruyne’s first three were all the more admirable because each came with his less favoured left foot and all the more significant because they restored City’s three-point lead at the top of the table while putting their goal difference potentially beyond Liverpool’s reach.

De Bruyne was runner up to Mohamed Salah in the Footballer of the Year vote. He can miss out on individual awards to Liverpool players but showed a determination to collect the team prize. He has been the outstanding player in the Premier League since December and a virtuoso display of brilliance featured some lovely passing, a series of driving runs and a quartet of goals. In the process, City emulated Liverpool, who had won in the West Midlands against spirited opponents a day earlier. Guardiola’s men have stumbled at Molineux in the past, conceded an equaliser to Leander Dendoncker and, with their centre-back injuries, were forced to field 37-year-old Fernandinho at the heart of their defence. When Aymeric Laporte, who had been the last man standing, came off for the final half-hour, De Bruyne promptly scored again to ensure nothing else mattered.

If City retain their title, it will be won on their travels. For all their technical expertise, they are a side who repeatedly display their mettle on their road. It makes last week’s meltdown in Madrid all the more incongruous as they have not lost a Premier League game outside the Etihad since August and this was won in under half an hour.

The opener was a glorious goal that came from a combination of City’s ersatz front two. Lacking a striker – at least until Haaland arrives – they instead used twin attacking midfielders and they played a one-two, with Bernardo Silva providing a delectable touch and a return ball to De Bruyne to steer his shot beyond Jose Sa.

His capacity to be both creator and finisher was again apparent in his second. It stemmed from another of his own passes, albeit indirectly. He aimed to find Raheem Sterling and while Sa came out to block, he did not claim the ball, allowing the advancing De Bruyne to sidefoot in.

The third felt a tour de force, De Bruyne powering between two defenders and unleashing a left-footed drive. His fourth was a third when he had been involved in the build-up, feeding Phil Foden and, after the Englishman’s cross came off Jonny Castro Otto, supplying the finish. Perhaps he merited an assist, too, and almost got one when he released Phil Foden, who struck the woodwork. Sterling hit the post in a different sense, colliding with it when he failed to convert Foden’s cross. Sterling eventually got his goal, a tap-in from Joao Cancelo’s cross, but De Bruyne almost overshadowed him again, inches from a fifth when he rattled the upright.

If Wolves felt luckless to face him in this form, their misfortune stretched to the management. They were depleted in the dugout, missing Bruno Lage and goalkeeping coach Tony Roberts, who served as his deputy at Stamford Bridge, courtesy of positive Covid tests, and assistant manager Carlos Cachada was in charge. His felt a thankless task.

By the end, it felt academic that Wolves had levelled, though it came courtesy of a scintillating counterattack. Raul Jimenez led it, feeding the overlapping Pedro Neto and when he cut the ball back, Dendoncker arrived in the box to slot in his shot. They showed more attacking intent than they have on many another occasion this season but the reality is that De Bruyne joins Jimenez as the top scorer in league games at Molineux this season. Wolves had never conceded four in a game in Lage’s reign. Then they let in four to the same player. Such is the De Bruyne effect.