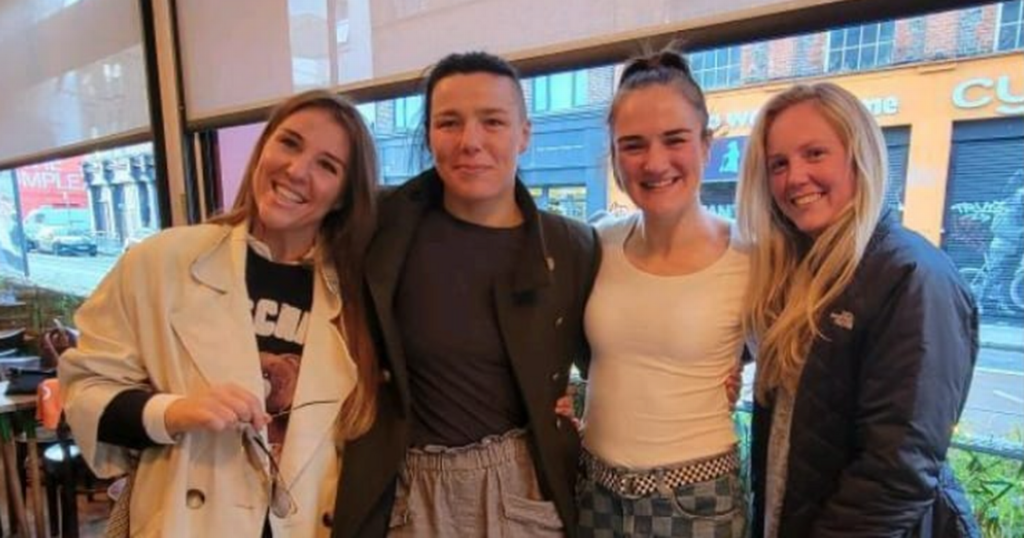 Kellie Harrington and her partner Mandy Loughlin hung out with Bellator fighter Sinead Kavanagh over the weekend.

The Olympic gold medallist is good friends with the MMA star, who is preparing for the biggest fight of her career against Cris Cyborg.

Kavanagh faces the Brazilian, who has been linked with a crossover fight against Katie Taylor, for Bellator's featherweight title on November 12 in Florida.

Sharing a picture on Instagram, Kavanagh, who fights out of John Kavanagh's Straight Blast Gym, said: "Positive vibes. Belly laughs too much coffee."

Harrington shared the same picture and commented: "We don't see each other as often as we would like but when we do it's a belly full of laughs @sineadkavanaghko. We share some memories good and bad. Started from the bottom and worked to the top against all the odds."

Kavanagh has fought in Bellator since 2016, winning four of her eight fights in the promotion, but she says she has been unlucky with some of the decisions given against her for some of those defeats.

On fighting Cyborg, she said: "I'm just going to do the same things I do. My style doesn't suit her. I'm a boxer. I can do damage here. I'm going to stick to my gameplan and try to take her out."

Speaking on Virgin Media's Ireland AM last week, she explained: "Tonight will be my first proper night back with my club coach Noel Burke out in St Mary's in Tallaght.

"I'll put the gloves on and I'll see how I am. I know I'm unfit but your body needs that.

"That's the longest break I've ever had in fairness. It's hard when you go from full-time athlete to sitting on your couch eating biscuits, chocolates and cakes."

She added: "I can't wait to get back but I know I'm going to be in a place where I've actually never been in a long time and that's being very unfit.

"People think look at you, you're not unfit, but [she's not fighting fit].

"Everyone has different types of fitness levels. Mine was right there [at the top], now I'm back down here. We'll get there."