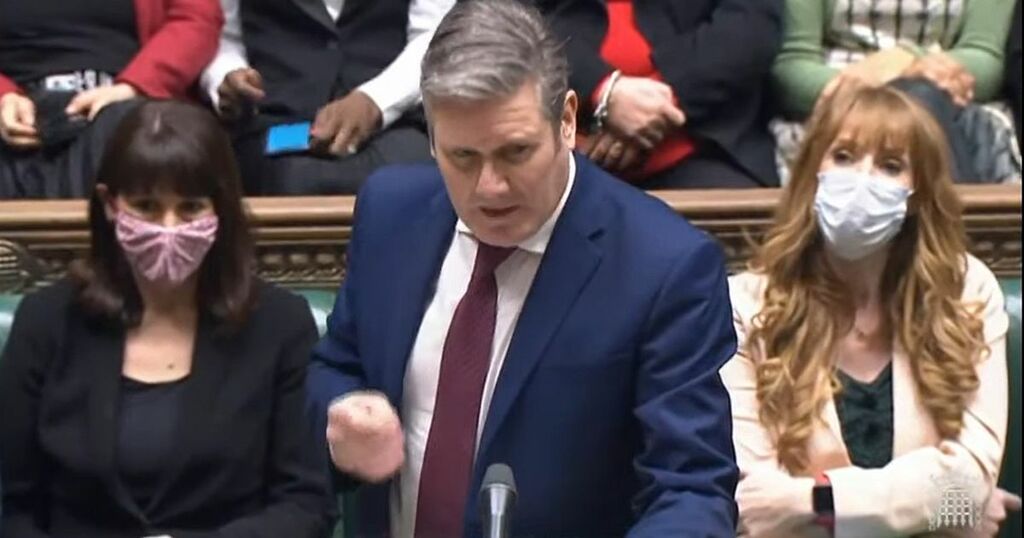 Labour ’s leader joined a string of MPs saying the Prime Minister must “do the decent thing” after he broke and undermined his own ultra-strict rules in May 2020.

Mr Johnson told MPs he “went outside for 25 minutes” to thank staff on May 20, 2020, but "with hindsight I should have sent them back indoors".

But he tried to wriggle out of censure by saying: "I believed implicitly that this was a work event." And he once again urged MPs to wait for an inquiry by Whitehall enforcer Sue Gray.

“After months of deceit and deception, the pathetic spectacle of a man who has run out of road," Sir Keir said.

"His defence ... that he didn't realise he was at a party is so ridiculous that it's actually offensive to the British public."

Labour’s leader added: “It turns out he was at the parties all along.

“Can’t the Prime Minister see why the British public think he’s lying through his teeth?”

MPs are not allowed to accuse each other of lying in the Commons chamber, but Speaker Lindsay Hoyle allowed it - saying: “It was what the public think, not what a member is saying.”

There were huge cheers from the opposition at the Speaker's ruling.

Tory MPs cheered when the PM arrived but were motionless and mostly silent as he trotted out his excuse - while Labour MPs jeered, waved order papers and heckled.

When the PM said he regretted that “people in Downing Street were not following those rules”, several opposition MPs shouted: “You!!”

Theresa May sat with her arms pulled across her chest, staring impassively at the floor as Keir Starmer called for the PM to resign.

In a statement ahead of the PMQs clash, Mr Johnson said: "I know the rage [the public] feel with me and with the Government I lead when they think in Downing Street itself the rules are not being properly followed by the people who make the rules."

The PM said he went into the garden for a short while but he should have sent everyone back inside.

He added: “I should have recognised that even if it could be said technically to fall within the guidance, there are millions and millions of people who simply would not see it that way, people who have suffered terribly, people who were forbidden for meeting loved ones at all inside or outside, and to them and to this House I offer my heartfelt apologies.”

But the Labour leader hit back, demanding to know why he hadn't resigned when others had been forced to quit for breaking the rules.

"Why does the Prime Minister still think that the rules don't apply to him?"

Labour MP Karl Turner said the PM “must resign”, saying: “He’s sorry because he’s been caught… He is bang to rights.

“While my constituents were making sacrifices he was hosting boozy parties in Downing Street.”

Labour MP Toby Perkins said he had "debased the office" of Prime Minister.

And Labour MP Chris Bryant, chair of the Commons Standards Committee, added: “The PM didn’t spot he was at a social event? Come off it.

“How stupid does the Prime Minister think the British people are?

“He’s making fools of every single MP who cheered him earlier.”

SNP Westminster leader Ian Blackford said that if Boris Johnson "has no sense of shame", then the Tory backbenchers "must act to remove him".

Mr Blackford said that while the public "suffered pain and anguish", the Prime Minister "was drinking and laughing behind the walls of his private garden".

He added: "The public overwhelmingly think that the Prime Minister should resign.

"Trust has been lost and the public will not forgive or forget. If the Prime Minister has no sense of shame, then the Tory backbenchers must act to remove him."

The Prime Minister replied: "I just want to thank the right honourable gentleman for his political advice, which I will take with a pinch of salt since it comes from the Scottish Nationalist Party.

"I think that most people looking objectively at what this Government has delivered over the last 18 months would agree that ... and I renew my contrition for the mistakes that have been made, but we have delivered the fastest vaccine and the fastest booster rollout in Europe, and the result is that across our whole of our United Kingdom, we have the record number of people back in work."